A Face-off in a Fast-paced Competition
Votes

A Face-off in a Fast-paced Competition 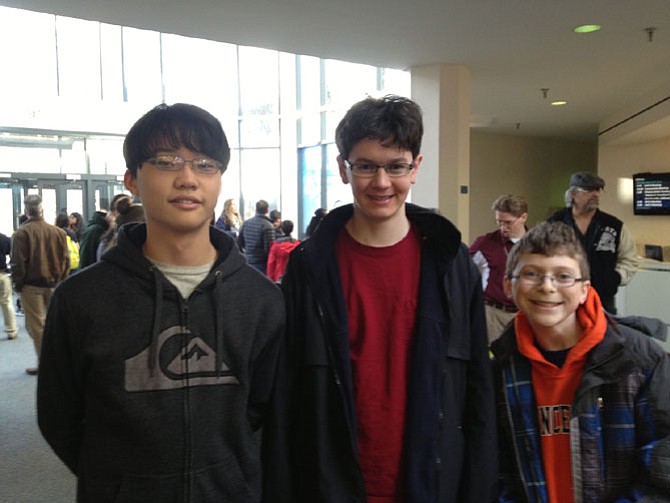 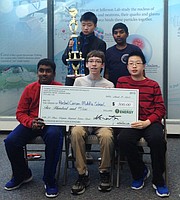 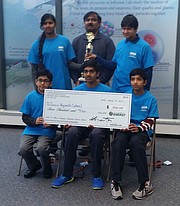 Students from five local middle schools traveled to Newport News to compete in the regional competition for the U.S. Department of Energy Office of Science’s National Science Bowl (NSB) at the Jefferson Nuclear Lab. The competition took place Saturday, March 7. Students from Longfellow Middle School will compete in the National Finals, held in Washington, D.C. from April 30 to May 4, for their first place win in Saturday’s competition.

Other local schools at the competition included Frost Middle School in Fairfax, Rachel Carson Middle School and the Nysmith School for the Gifted in Herndon, and Joyce Kilmer Middle School in Vienna. These five schools were part of a total of 14 schools competing in Newport News on March 7. The students were tested in a range of scientific disciplines, including biology, chemistry, earth science, physics, energy and math.

In 1991 the Department of Energy (DOE) created the National Science Bowl “to encourage students to excel in mathematics and science and to pursue careers in these fields.”

Furthermore, “Approximately 240,000 students have participated in the National Science Bowl throughout its 24 year history, and it is one of the nation’s largest science competitions.”

VETERANS OF THE COMPETITION, Longfellow Middle School has competed in the National Science Bowl previously and two years ago the students placed second, overall, at the national level.

“The students were elated,” said coach James Bradford about the students’ reactions to winning first place. “They had to come from behind for five of the last six matches of the day—they remained calm and focused and were able to prevail.” Selection for the school’s team is based on tryouts.

“About 25 students try out for the team. They take a few written exams and also get the opportunity to compete with each other using the buzzer systems that are used during the competition,” said Bradford. The best five students from the tryout were then selected to compete in the regional event of the National Science Bowl.

Representing the team at the national competition were Chris Bi, Aaditya Singh, Wenbo Wu and Benjamin Wu. For their first place win, the team will receive an all-expense paid trip to D.C. The students met weekly for two hours to prepare for the regional competition, and will use a similar strategy as they prepare for nationals.

“Students will continue reviewing in a similar manner, with perhaps a little more time devoted to practice sessions using the buzzer system to hone their speed skills,” said Bradford. “A feature of the national competition will also include designing a model vehicle that will compete in either a solar powered or battery powered competition,” said Bradford.

The team received $750 in prize money to support science at Longfellow.

The team at Frost Middle School in Fairfax consists of Andrew Kim, Eugene Jeong, Vasti Salazar, Ruben Ascoli and John Small. All of them are eighth grade students, and two of them have competed in the competition previously.

“I think it’s a lot of fun and I like competing in science competitions and I like being on teams because there are other people who share the same interests as me,” said Ruben Ascoli, a member of his school’s team. To prepare, students on the team at Frost each took turns preparing a lecture pertaining to a certain scientific topic. They then gave this lecture to other members of the team.

“The biggest value is the kids have community with others who love science and want to study it on their own time. Feel like it has fantastic value and a lot of basic and fast-retrieval knowledge,” said Rebecca Goldin, mother of Ascoli and one of the team’s co-coaches. “All of the kids are completely science lovers. I think it will definitely help propel their interests further. There’s a lot of appreciation in schools if you’re really talented in a certain area.”

STUDENTS REPRESENTING FROST MIDDLE School in the competition were selected from about 20-30 students at their school that were interested in being on the team.

The competition consisted of a buzzer round, including quick-response style questions. There were also a toss-up and bonus problems all dealing with math and science questions that the students could answer.

While the team did not advance to the national round, the team members remained enthusiastic about Saturday’s competition, stating that it was fun and that they learned a lot.

“There aren’t a lot of competitions like this that are basically quizzes. A lot of TSA competitions are projects. MathCounts is a written test. This competition is about what team can answer the questions faster,” said Small.

Their advice for other students hoping to form a team and/or do well in the National Science Bowl is to know the format of the competition and to know how to use the buzzers.