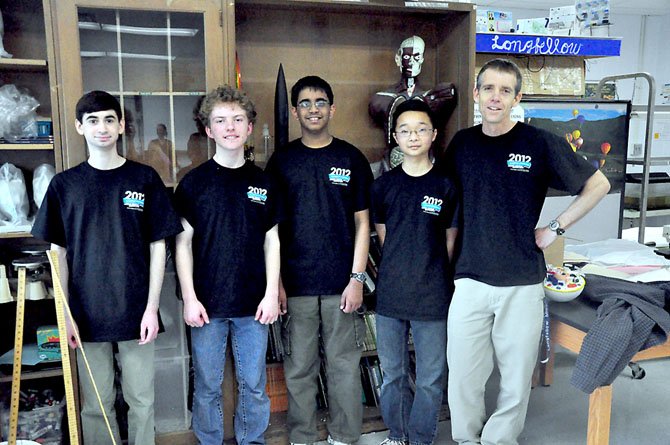 "I think we’re a little more comfortable with going to nationals, we’ve improved the way we’ve studied, and brushed up on more topics such as earth science," said eighth grader Ross Dempsey. "We’re definitely improved, and I think we’ve got an even stronger knowledge base."

The Longfellow team beat 22 other middle schools in the March 3 state competition. The Science Bowl brings together thousands of middle schoolers from around the country to compete by answering questions about biology, chemistry, earth science, math, physics and astronomy.

The competition was created by the Department of Energy in 1991, and it has become the nation’s largest science competition.

"I think it’s fun and educational in equal amounts," said team member Ryan Golant, an eighth grader. "Our experience from last year gives us a good insight in trying to predict what kinds of questions we’ll see. We know for sure there will be a lot of questions about energy, since it’s put on by the Department of Energy."

Another part of the competition includes a science experiment, which has involved alternative fuel sources for cars the last few years. Last year, the team built a hydrogen fuel cell vehicle, this year it’s a battery powered one.

"Last year it was tough to time out when to pump hydrogen into the fuel cell to keep the car going, but with a battery we just have to make sure we keep moving," said eighth grader Keaton Lee, who was the primary builder for the cars. "I like it because science is necessary for engineering, which is about applying concepts to the real world. I’ve always liked building things and making a lot of engines and simulations, and hopefully I can use that knowledge to build things like ships and planes in the future."

While four eighth graders will go to the competition, the Longfellow team consists of more than a dozen students. The eighth graders, while preparing for their competition, are also taking time to mentor the younger students, who they hope will be winning competitions in the coming years.

"Competing against the eighth graders is really terrifying, they’re good, when Ross gets a question, he usually has the answer before it’s finished," said seventh grader Ruyan Zhang. "But it’s fun to compete, and I think we’re getting a good sense of what we’ll need to do well in next year’s regionals, and hopefully we’ll make it to nationals."

The seventh graders will be making their own trip during the nationals, which will take place April 26-30 in Washington, D.C. They’ll be going to the Massachusetts Institute of Technology.

"I’m excited, but nervous to go to MIT, it will be the first time I’ve been there," said seventh grader Neeraj Prasad. "I know there will be plenty to learn."