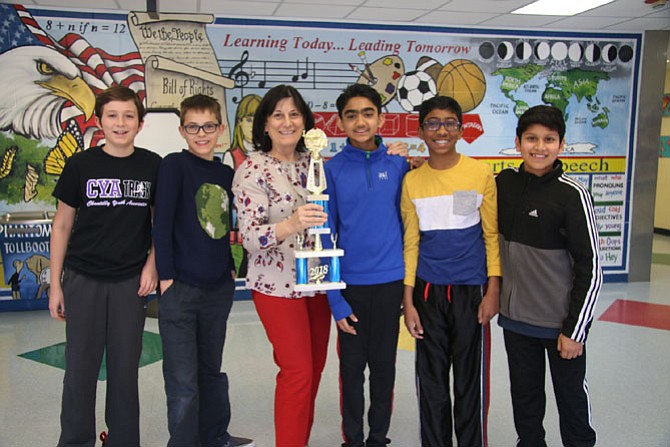 As the top middle school team, Rachel Carson’s members, Shruti Kamasamudram, Om Duggineni, Deccan Maniam and Srihan Kotnana advance to the National Science Bowl in Washington D.C. to compete against other like-minded science-savvy students from teams across the United States. Their goal? Win the academic Round Robins and Double Elimination Tournaments, and then outsmart the other remaining competitor using knowledge and gamesmanship in the Final Match.

During the recent Regional Competition, 17 teams from across the Commonwealth faced-off in fast-paced question-and-answer rounds, tested on a range of science disciplines and mathematics. Team members needed to be familiar with all subjects, but individuals concentrated the bulk of their learning on 2-4 areas of expertise. Studying wisely and practicing were vital in winning but so too were knowing the rules and utilizing game-playing strategies.

AT THE REGIONAL COMPETITION, like at the upcoming Nationals in Washington D.C., teams advanced through the rounds with participants answering multiple-choice questions with either the letter answer, i.e., "W", "X", "Y' or "Z" or the verbal solution; however, if an oral response was given, it had to exactly match as indicated in the question or as read by the moderator.

Teams activated lockout buzzers, and matches played until either the time expired or all of the toss-up questions and earned bonuses for correct toss-ups had been read.

Examples of types of questions that might be asked had been posted on the competition’s website. Some examples:

In his opening remarks for the 4-day competition, Robert McKeown, Jefferson Lab’s Deputy Director of Science welcomed the teams, family members, and the team coaches. His words and encouragements are quoted on the jlab.org website: “It is difficult to make predictions about the future,” he said, quoting Danish physicist Neils Bohr, “but what we know for sure is that the advancements of the next 50 years will be up to young people like you.” He encouraged the students to continue their studies and to consider pursuing careers in science, technology, engineering, and math.

Team Rachel Carson beat out the other 16 teams at the competition in a flurry of fast answers and strategic planning, an academic fight to the finish. Jlab.org described the final action in a play by play knuckle-biting review: “The sixth round of the afternoon pitted the undefeated team from Longfellow Middle School against the Rachel Carson team, with one loss. Rachel Carson started the round in strong form and won the round. Therefore, with one loss each, the teams faced off again in one final round. At the half, Rachel Carson was ahead of Longfellow, 32-20; then Longfellow pulled ahead. With Longfellow in the lead, 66-64, the clock ran out as Moderator Brad Sawatzky started reading question 23 (physical science). Rachel Carson buzzed in first, answered the question correctly (4 points) as well as the follow-on bonus question (10 points), and won the round 78-66.”

Rachel Carson team coached by Sudhir Duggineni, brought home a trophy, a $750 check for the school, individual medals, and a regional banner to take with them to the National Science Bowl finals in Washington, D.C., April 26-30. The team will receive an all-expense-paid trip to compete for the national title as they go head to head against like-minded science-savvy students from across the United States.

TEAM MEMBERS will attend a full schedule of educational seminars and enjoy a little sightseeing.

In an interview, Gordon Stokes, Principal Rachel Carson Middle School praised the team students and their coach." He said, "We are honored that students gave a lot of their personal time to prepare and compete in these types of events regardless of the outcome. We are proud they represented our school in such fine fashion."

Upon hearing the news that Floris Elementary finished fourth in the statewide science bowl, Principal Gail Porter said, "I'm so proud of these students. The key here has been their perseverance throughout the process. They are drawing upon the skill set of the Portrait of a Graduate. These skills include being a good communicator, collaborator, and critical, creative thinker as well as being goal-directed and resilient. We are trying to educate students to global citizens. I'm so happy their hard work has been recognized.”