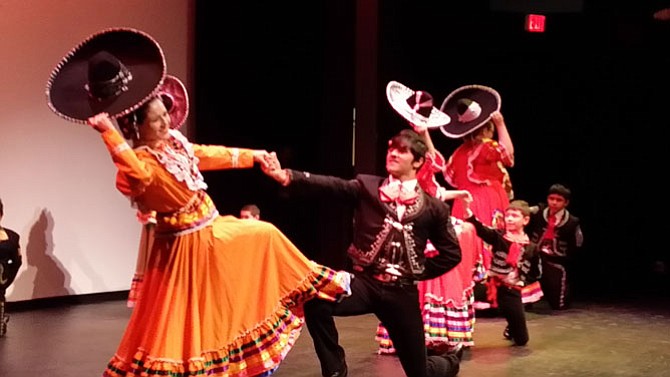 To commemorate Fort Hunt’s 25-year connection with Spanish-language countries, the PTA will host an assembly for all students featuring the D.C. Mexican dance ensemble Los Quetzales. They will perform Wednesday, March 25 with their lively music, colorful costumes and dance numbers with links to several regions of Mexico. For more information about the group, visit www.quetzales.org.

Over the past two-and-a-half decades, about 1,000 Fort Hunt students have moved on from their primary schooling years having learned more than just the three Rs. They also came away speaking Spanish.

This year, the school celebrates the 25th anniversary of its inclusion in the Fairfax County Public Schools World Language Immersion Program.

In 1990, 52 Fort Hunt first-graders started learning half of the day (language arts and social studies) in English and the other half (math, science and health) in Spanish. Fort Hunt was among seven pilot schools in the school district for partial-day immersion.

During the following years, Fort Hunt added one grade level at a time to the program and now has 350 students learning Spanish immersion in grades 1 through 6. The school admits 75 new students to the immersion program each year using a county-wide lottery system. Immersion students are assessed on their language knowledge during third and sixth grades.

TEACHING CHILDREN a new language through instruction in other disciplines requires a special skills set for the instructors who do this every day. Some of Fort Hunt’s eight Spanish immersion teachers are native speakers, while others have learned the language through years of schooling and exposure.

Lisa Rubenthaler is the partial-immersion lead teacher. She teaches Fort Hunt’s fourth-grade immersion students and is in her third year in her position. Rubenthaler fell in love with Spanish language and culture during a high-school visit to Spain, going on to study Spanish in college and moving to Madrid for a three-year stint after graduation. She says elementary students pick up language quickly without even realizing what they have learned and they are not afraid to make mistakes or experiment with the language. “For those students who continue with Spanish in high school it also gives them a major advantage in the work force and gives them access to many different countries and cultures,” she said.

Isabel Gonzalez has been teaching Spanish immersion at Fort Hunt for 16 years and is currently teaching second-grade. “I not only get to teach students my favorite subject, math, but also my native language,” Gonzalez said. She was born and raised in Spain and moved to the United States in 1998. Gonzalez said exposure to different languages and cultures at an early age will help immersion students get a broader view of the world, as well as give them better opportunities for college and careers. “An English-only world is becoming something of the past,” she said.

Juana Miller has worked as part of Fort Hunt’s immersion program for seven years, six years as an instructional assistant. This is her first year as an immersion teacher. A native Spanish-speaker, Miller was born in Lima, Peru. She said she enjoys witnessing children who had no experience with Spanish make progress in speaking and understanding the language. “Learning a new language opens children’s minds to different cultures and teaches them to appreciate the valuable things that people of different nationalities and cultures have to offer,” Miller said.

Stephen Halliday is in his second year at Fort Hunt. He teaches 5th grade Spanish immersion. He was born and raised in Arizona, near its border with Mexico. He later lived in Mexico for a while. He says he loves the cultural aspect of the immersion program and watching students learn about their culture in relation to other cultures. He feels the immersion experience will help students communicate better in a society that now considers Spanish its second language.

Veronica Lindeman has been teaching for eight years at Fort Hunt and she says Spanish is literally “in her blood.” Lindeman was born in Peru. Her mother was from Madrid and both her father and her late husband had careers as diplomats. Lindeman said there are both cognitive and academic benefits to learning a second language. Students who learn a second language become more flexible and creative and often better master and understand their own native language in the process.

Rosa Callejas has been filling in for Lindeman this year. She’s a native Spanish speaker of Salvadorian nationality and has studied Spanish from 7th grade through college. She was secretary for the National Spanish Honor Society in high school. “Being a part of the Fort Hunt Spanish immersion program this year has been a great experience to share my passion for the language.”

Daviel Cruz is in his second year at Fort Hunt and teaches 6th grade Spanish immersion. Cruz was born and raised in Puerto Rico, where Spanish was his first language. “The rewarding part about teaching Spanish to elementary students is being able to see the thrill young children get from learning Spanish and how proud they are of themselves,” he said.

Rachael Smith is in her first year teaching Spanish immersion at Fort Hunt. Ms. Smith grew up surrounded by Spanish speakers and Spanish culture. While attending Middlebury College, she participated in a Summer Spanish Immersion Program and did a portion of her student teaching at Raul Pavón Bilingual Bahá'í School in the mountains of Otavalo, Ecuador.