Experts tout the benefits of an early start 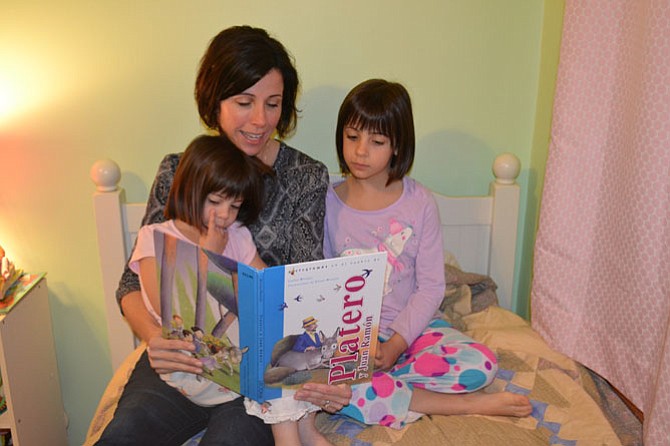 When Martha Davis’ daughter Alice was ready for kindergarten, she decided to enroll her in a Spanish language immersion program. Davis, who is the assistant dean for World Languages at Northern Virginia Community College chose Mt. Vernon Community School in Alexandria.

“I know personally the benefits of knowing a second language and I wanted my daughter to experience that,” she said.

Davis, also a Spanish professor, says that the benefits of such immersion programs range from boosting cognitive functioning and confidence to accent acquisition and social skills development. “Speaking with a native or near-native accent significantly eases communication, particularly with people unaccustomed to interacting with non-native speakers,” said Davis. “This in turn can help boost the confidence of the non-native speaker and can provide the encouragement needed to continue language study.”

Numerous studies suggest the brain-boosting power of early exposure to a second language as another benefit of immersion programs for young children, says Ana Lado, Ph.D., professor of Education at Marymount University in Arlington.

“Cognitively, kids who learn two languages in preschool and really young children tend to score better on abstract thinking all the way into high school,” said Lado. “If you know that in one language there is one word for chair and it includes foot stool and sofa chair and lounge, and in another language you have three different words it makes your brain think more abstractly.”

The sooner children gain exposure to a second language, the easier it is to acquire, says Davis who contrasts her daughter’s feelings with those of some of her adult students, “who feel that speaking another language is strange or foreign,’ which impedes their language acquisition,” she said.

“I have found that if students can identify themselves as a speaker of the language of instruction, regardless of their level of proficiency, they enjoy learning the language more and acquire it more easily,” said Davis. “This year Alice has begun to sign her name ‘Alicia’ on her Spanish homework.”

Local language immersion programs offer classes for children as young as 10 months old. They use songs and games to teach language in a way that is pleasurable for students. “Starting when they’re young helps language develop organically and naturally,” said Amanda Michetti of Language Starts, which offers classes to children in Alexandria, Fairfax, Arlington, Reston and Bethesda. “The classes are conversation based with a little bit of reading and writing.”

Hilary Javier has three children, ages two, three and four, who take Mandarin Chinese at Language Starts. She wants them to be citizens of the world, and believes exposure to a second language is important in achieving that goal. “You don't have to translate anything into English,” said Javier. “They really do understand from picking it up naturally in the immersion setting. There is this special window when they are young to expose them to different cultures they would not never been exposed to, even noticeable in their mannerisms in the classroom.”