Students from across the county recognized at 60th Annual Fairfax County Regional Science And Engineering Fair. 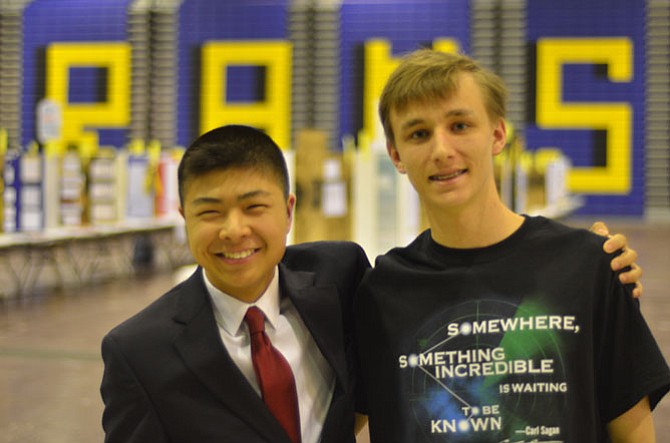 In recognition for their project at the 60th Annual Fairfax County Regional Science And Engineering Fair, Herndon High students Thomas Cecil and Brad Ho won an invitation to tour the DEA Testing and Research Lab. Photo by Ryan Dunn. 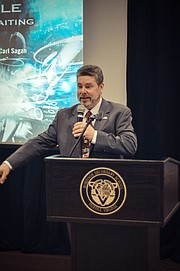 Awards were presented for students who entered the 60th Annual Fairfax County Regional Science And Engineering Fair. The science fair closed Sunday, March 22 with the Awards Ceremony at Robinson Secondary School in Fairfax.

High school students from Fairfax County schools attended the annual regional science fair held at Robinson Secondary School in Fairfax, March 20-22, to compete for prizes and recognition.“This is the 60th Fairfax County Public Schools science fair, and I think that deserves a round of applause,” said fair director, Myra Thayer.

“We are all proud of the job our students did at the regional science fair,” said Tim Harazin, Fairfax County Public Schools Elementary science specialist.

“We also appreciate all of the volunteers that it takes to make a successful event like this. There were almost 400 judges between the category judges and the organization judges that volunteered time yesterday morning and afternoon to interview the students and provide encouragement. There were also many volunteers from teachers and other county staff that worked together to have the event come off so well,” Harazin said.

The event was an opportunity to showcase and promote the science, technology, engineering and math (STEM) skills of Fairfax County schools.

"The regional science fair is always an amazing representation of the project-based learning that our students have engaged in, and it's incredible to think that we've now held the event for 60 years," said Ryan McElveen. "It's always an honor to participate, even if I don't understand the science behind the majority of the projects."

“The thing I love about the science fair is that it gives kids a chance to talk about something that they have created with a really authentic audience, our fantastic judges,” said Charley Sabatier, High School science specialist with Fairfax County Public Schools. Sabatier worked with Myra Thayer and volunteers to make the event possible. “We are so thankful for the support that we receive for the FCPS regional science fair from the school board, the leadership team, and our amazing school principals. The science fair is a wonderful example of a truly authentic STEM event.”

SOME OF THE PARTICIPANTS won several awards for their scholastic work at the science fair. This included Chantilly HS student Aishwarya Nugooru, who in addition to being a grand prize winner for the ISEF fair, won awards including the Youth Inspire Award 1st Place Award and American Statistics Association, Honorable Recognition. Nugooru’s project entails a novel therapy for HIV, an infection that does not currently have a cure. “My approach is a safe, accessible and targeted therapeutic for HIV… Many have discouraged me from continuing my research and they described a cure for HIV to be "impossible" but I always thought: ‘Shoot for the stars and you never know where you'll end up.’ In this case, my perseverance as a researcher has led me to discovering a potential cure and paradigm shift in HIV/AIDS research.”

“I'm always amazed by the ingenuity and creativity of our student researchers and I was very glad to be a part of this year's fair. Many of my classmates presented their projects ranging from cancer research to electrical engineering and I am sure the next generation of scientific pioneers are among those who participated in our Fairfax County Regional Fair,” said Harris LaTeef, Langley High School senior and student representative to the Fairfax School Board.