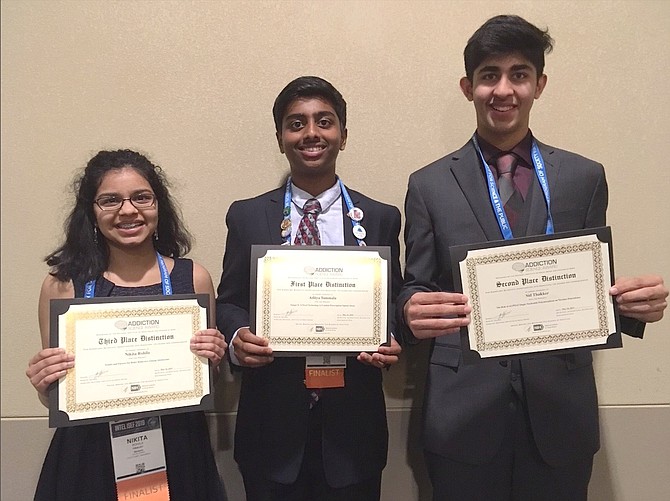 A 14-year-old’s innovative approach to prevent tampering and misuse of opioid pills won a first place Addiction Science Award at the 2019 Intel International Science and Engineering Fair (ISEF)—the world’s largest science competition for high school students. The awards are coordinated by the National Institute on Drug Abuse (NIDA), part of the National Institutes of Health, and Friends of NIDA, a coalition that supports NIDA’s mission. The Intel ISEF Addiction Science Awards were presented at a ceremony Thursday night at the Phoenix Convention Center in Phoenix, Arizona.

The second place award went to high school sophomore Sid Thakker from James Madison High School in Vienna for his project “The Role of ALPHA5 Single Nucleotide Polymorphism on Nicotine Dependence.” Using an in vitro model, the 15-year-old manipulated and edited the gene expression of the ALPHA5 nicotinic receptor, which has been linked to nicotine addiction. Specifically, he used the sophisticated gene-editing platform CRISPR to remove a small genetic component from the receptor, and then studied the changes in function and gene expression. His hope is that one day we can discover how to conduct this genetic editing in animals, leading to new therapies in humans.

Nikita Rohila from Stuttgart High School in Stuttgart, Arkansas, was awarded the third place distinction, for her project “Trends and Factors for Risky Behavior Among Adolescents.”

“We were astonished at both the quality and quantity of ISEF finalists who qualified for the Addiction Science Award this year,” said William Dewey, Ph.D., president and chair of the Executive Committee, Friends of NIDA, as well as the Louis S. and Ruth S. Harris Professor and chair, Department of Pharmacology and Toxicology, Virginia Commonwealth University, Richmond. “We are pleased to support these exemplary high school students and encourage them to consider a career in the field of addiction science.”

This year, about 1,800 students from more than 75 countries, regions and territories participated in the Intel ISEF competition, coordinated by the Society for Science and the Public.

Addiction Science Winners receive cash awards provided by Friends of NIDA, with a $2,500 scholarship for the first-place honoree, $1,500 for second place and $1,000 for the third place distinction.