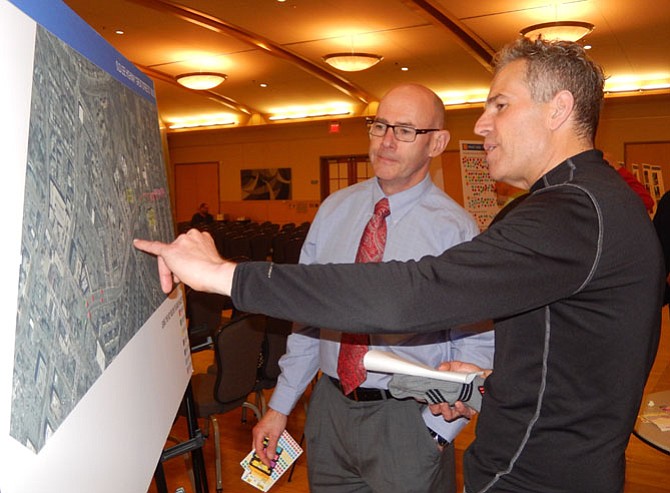 But believing it can be improved, the City applied for and received a grant for technical assistance to help determine what should be done there. 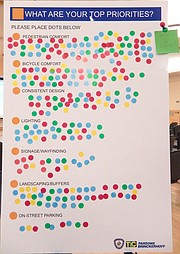 “We want to create a great street,” said Brian McMahon with Parsons Brinckerhoff, a transportation planning and design firm, and Fairfax’s consultant on this project. “Streets do change over time, and we hope this transformation will meet the community’s vision.”

Old Lee runs 1.5 miles from North Street to Fairfax Circle. About 13,000 vehicles a day travel on it, as do thousands of kindergarten-through-college students. It has 21 local bus stops, and some portions have on-street parking.

And last Thursday, March 19, nearly 150 people attended a meeting on the project at the Sherwood Center. But first, McMahon addressed City Council in February. “We want to create a sense of place,” he said. “And public involvement is the linchpin to the success of this project.”

“We need to promote walk-ability, bike-ability and safety, too, so people can get to the Circle,” said Councilman Michael DeMarco.

AT LAST WEEK’S PUBLIC MEETING, Councilman David Meyer told attendees they’d be providing input into a conceptual plan. “Old Lee Highway is one of the oldest roads in Virginia and pre-dates the Civil War,” he said. “But it hasn’t changed much since the neighborhoods went in. We have the opportunity to make it safer for pedestrians, bicyclists and vehicles, and the Council wants to know what the community wants.”

Sanford said the Council of Governments awarded Fairfax a Great Street grant for the study. “We’re looking at what’s your vision for this street – not major changes, like adding lanes.”

“Great streets are streets that are memorable, reflect the community and foster social interaction,” said McMahon. Giving an overview of the current Old Lee Highway corridor, he said, “Every few blocks have a different look and feel. Are there areas of it we want to improve? Some are residential, some commercial, some near offices and some historic-looking.”

“Do you want the power lines imbedded so they’re not in view?” he asked. “Some pedestrian and bike paths are very close to traffic; should this be changed? And some individual properties have their own access points, creating confusion for drivers.”

McMahon said traffic on Old Lee hasn’t grown since 2005, but there have been accidents. The trouble spots have been at the road’s intersections with North Street, Layton Hall Drive, Rebel Run (near Fairfax High), the Sherwood Center, and Army Navy Country Club’s entrance and exit. Noting that 76 percent of Old Lee motorists are driving 30 mph or less, he asked residents if that speed limit should be lowered to 25.

Besides developing a big-picture vision for those traveling and living near Old Lee, McMahon said the project will also involve beautification plus better stormwater-management practices. “We’re getting community feedback tonight – your likes and dislikes,” he said. “But we’re not going to widen Old Lee Highway.”

“We want to bring diverse user groups together and give precedence to people walking and biking,” he continued. “We also want the street to provide comfort with its trees and have special design features, such as the light fixtures, tree spacing and pavement.”

Residents then viewed various informational boards about the road. They also placed colored dots and sticky notes on other boards to tell McMahon and Sanford what issues and/or road characteristics were important to them.

And at six Streetmix computer stations, they used interactive software to describe what they wanted to see along Old Lee, including bike racks, signage, light poles, planter boxes, etc. They could also take the Website’s address with them, create their own streets on their home computers and email them to Sanford.

The address is www.streetmix.net/ (but it won’t work with Internet Explorer; use Chrome, Firefox or Safari). Submit design images by April 3 to Wendy.Sanford@fairfaxva.gov. “You don’t have to get everything right,” said McMahon. “Just give us an impression of what’s important to you.”

He said the three areas of Old Lee to be studied are Willard Way/Courthouse Plaza, Embassy Lane/North of Blenheim, and Artie’s Restaurant/south of Old Pickett Road. “Create your vision and we’ll take your feedback, brief the Council and then return in May to present two alternatives at another public workshop,” said McMahon.

THE COUNCIL will be briefed again in June and consider adopting the conceptual plan.

Depending on how they use Old Lee, different residents have different concerns. For John Morris, president of the Fair Oaks Homeowners Assn., the issues are safety and beautification.

“Old Lee has a curved hill coming from the country club, down to the bridge and Ridge Avenue,” he said. “Cars coming out of Ridge can’t see Old Lee traffic to their right, coming downhill. They have to pull into the road to see it, and pedestrians crossing Old Lee at the Ridge Avenue entrance are also in danger from the speeding, downhill drivers.”

Morris said motorists coming from Artie’s parking lot on Old Lee and “making illegal U-turns both on Old Lee and Ridge” add to the problem. “A blinking, caution light could go at the entrance to Ridge on Old Lee, or uphill on Old Lee,” he said. “Or traffic enforcement could be increased.”

“Or they could slightly elevate the crosswalk and paint it with reflective stripes so drivers could see it and would have to slow down,” continued Morris. “And in my neighborhood, many elderly residents can’t cross Old Lee quickly from the Ridge Avenue entrance.”

He’d also like to see beautification all along Old Lee, but especially in this area, up to Fairfax High. “I’d propose an underground utility study to maybe bury the power lines and new conduits for future growth,” he said. “Then Old Dominion Power wouldn’t have to hack the tree limbs because of the overhead power lines and make the trees less appealing.”

Meanwhile, D. Michael Parrish said he values bicycle and pedestrian comfort on Old Lee, plus lighting for driver safety. “I kind of like the road the way it is,” he said. “But the right side, going north toward Fairfax Circle, should have a sidewalk. And turning left to get into the Sherwood Center and the park is a problem because of all the traffic.”