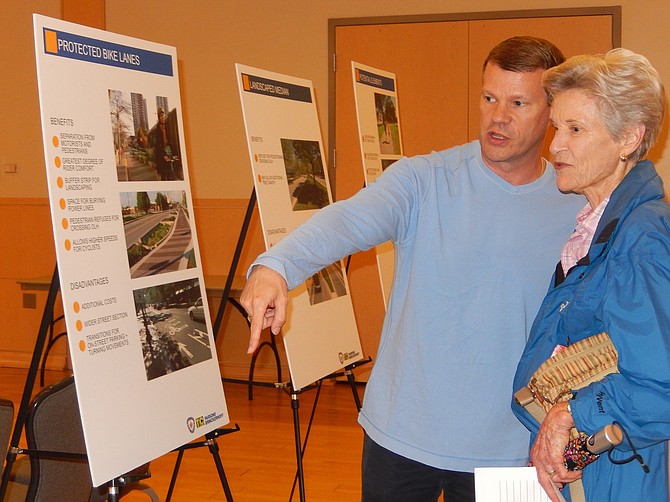 Since Old Lee Highway is one of the main streets of the City of Fairfax, its citizens have a vested interest in how well it looks and functions. So they’re being involved in its revitalization.

Old Lee runs 1.5 miles from North Street to Fairfax Circle. About 13,000 vehicles a day travel on it, as do thousands of students of all ages. It has 21 local bus stops, and some parts have on-street parking. It’s also the conduit to homes, schools, businesses, shopping, the police station, Sherwood Community Center and Van Dyke Park.

So to make it even better, the City applied for and received a grant for technical assistance to help determine how to do just that. And it’s asking the residents’ opinions to learn what they want there.

“This is what living in a small town is all about,” said Mayor Scott Silverthorne to those attending a second, public-outreach meeting on the project, June 4, at the Sherwood Center. Thanking them for coming, he added, “There’s a lot of interest in pedestrian- and bicycle-friendliness, plus landscaping and safety, and the [City] Council wants your feedback.”

Also present were Council members David Meyer, Jeff Greenfield and Janice Miller, as well as City Transportation Director Wendy Block Sanford. “We’re here tonight to show you the concepts we’ve developed,” said Sanford. “About 150 people attended the first meeting [March 19] and gave comments; and those comments, plus the many emails and suggested designs we received afterward, informed the alternatives [now being presented].”

Brian McMahon with Parsons Brinckerhoff, a transportation planning and design firm, is the City’s consultant on this project. And although it’s a conceptual plan, Fairfax already applied for $2 million in FY 2016 revenue-sharing funds to do the actual work the study will recommend. It’ll also involve improved stormwater-management practices to retain water on site.

ONE OF THE OLDEST roads in the Commonwealth, Old Lee Highway has been around since before the Civil War. But it hasn’t changed much since its neighborhoods were built. And now, the Council of Governments has awarded Fairfax a Great Street grant for the study. McMahon said such streets are “memorable, reflect the community and foster social interaction.”

Currently, though, every few blocks of Old Lee have a different look and feel. So, without widening it, the City hopes to make it more cohesive. “The goals are to bring diverse users together, give precedence to bikers and pedestrians, and create an environment reflective of the City,” said McMahon. “We also want to clearly delineate the edges [of the Old Lee Corridor] and have it exhibit special design features.”

Based on resident feedback, said McMahon, the concerns are pedestrian safety, speeding, U-turns by Artie’s restaurant, conflicts between pedestrians and motorists, and traffic congestion during the start and end of the elementary-school day. They don’t want any new traffic signals, but they do want on-street parking preserved, as well as separated bike paths, wider sidewalks and specific safety improvements.

Various residents have different points of view. For example, Diane Henn is a cyclist so she’s interested in having bike lanes. For Matthew Eddy, safety in his community is paramount.

“I’m here to see any potential safety impacts on the families in Country Club Hills, both old and young,” he said. “We want a balance between pedestrian and bicyclist safety, while retaining the character of the neighborhood and alleviating traffic concerns farther down the road.”

Overall, said McMahon, pedestrian and bike comfort ranked as residents’ top concerns. “Tonight we’ll review the road’s key elements, consider the alternatives, refine them and come up with a preferred alternative which we’ll present to the community in July,” he said. “Potential elements are landscaped medians for the commercial areas, bike lanes and low-impact development techniques.”

“Segment Three is currently four lanes with lots of transitions,” said McMahon. “Its Alternate One has four lanes, but a reduction in the width of the travel lanes.” Alternate Two has two lanes and, said McMahon, “South of Old Pickett Road, two lanes would be fine, so there could be a larger setback and more separation from the on-street parking.”

Further details and diagrams of each segment’s proposed alternatives are at www.fairfaxva.gov/OldLeeHwy. Added Sanford: “Let us know which elements of each alternative you’d prefer to see.”