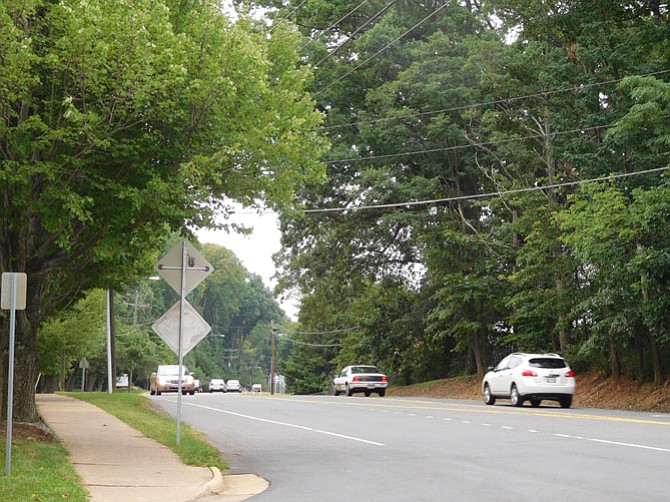 The results are in and City of Fairfax residents have now given their opinions on how best to improve Old Lee Highway. So the Fairfax City Council has authorized a survey of the entire corridor to obtain more information before going further with the project.

Old Lee runs 1.5 miles from North Street to Fairfax Circle and is one of the City’s main streets. Some 13,000 vehicles a day travel on it, including those en route to Daniels Run Elementary, St. Leo the Great Catholic School and Fairfax High.

This road is also the pathway to multitudes of homes, businesses and stores, as well as the police station, Sherwood Community Center and Van Dyke Park. Some sections have on-street parking, and there are even 21 local bus stops.

So to make it even better, the City applied for and received a grant for technical assistance to help determine how to do just that. It then sought the residents’ input to find out how they want Old Lee Highway to look and function.

Although it’s a conceptual plan, Fairfax’s adopted FY 2016 Capital Program includes $4 million to do the actual work the study will recommend. That amount represents $2 million in FY 2016 revenue-sharing funds and $2 million in 30-percent NVTA funds. Brian McMahon with Parsons Brinckerhoff, a transportation planning and design firm, is the City’s consultant on this project.

AS THINGS STAND NOW, every few blocks of Old Lee have a different look and feel. So, without widening it, the City hopes to make it more cohesive. “The goals are to bring diverse users together, give precedence to bikers and pedestrians, and create an environment reflective of the City,” said McMahon. “We also want to clearly delineate the edges [of the Old Lee Corridor] and have it exhibit special design features.”

During the City Council’s July 7 work session, McMahon revealed the results of a paper survey of residents taken at the second public meeting about this project, as well as their online comments. “We received 137 responses total,” he said. “And we used that information to develop the information I’m about to present.”

In addition, McMahon told the Council members, “In all segments, people wanted the travel lanes reduced from 12 feet wide to 11 feet to calm traffic. You now have a good program to go forward with the design phase, should you choose to.”

City Transportation Director Wendy Block Sanford added, “We recommend endorsement of these elements and a recommendation to proceed with an RFP [request for proposals] for the engineered design.”

But City Councilman Jeff Greenfield said he was “struggling with the impact on the residents along Old Lee Highway.”

“The intention is not to encroach on people’s yards, but to work within the existing right-of-way,” replied Sanford. “We recommend doing the preliminary engineering for the entire corridor. But we could do a conceptual design for 30 percent of it, first, to get a better idea of how things would fit.”

Since all segment-two residents facing Old Lee already have parking on their premises, Councilman David Meyer wondered why on-street parking’s needed in that whole portion. But Sanford said it wouldn’t be provided throughout all of it.

Referring to the residents’ overall comments, Meyer said he was glad that one homeowners association recommended the speed limit be reduced from 30 to 25 mph. “University Drive almost parallels it, has similar elements and is 25,” he said. “And if we’re going to put an emphasis on walking and biking there, then I think we should reduce the speed limit for safety.”

And, he added, “If we go forward with this, we’re going to need to underground the utilities. I’d like staff to determine what it might cost and how we’d fund it.”

MEANWHILE, Councilwoman Nancy Loftus said there wasn’t enough focus on vehicular traffic, safety or speed. “This question wasn’t included in the surveys, and it might be a great concern to people,” she said. “Also, 11-foot-wide lanes are very narrow, with not an extra inch to maneuver – and I don’t think people realized that.”

McMahon said vehicular travel was taken into account, but “traffic volumes haven’t grown. And the reduced lane widths were to slow traffic for vehicle, pedestrian and cyclist safety.”

Still, said Loftus, figuring in the shared-use path for bicyclists and pedestrians, plus the dedicated bike lanes, vehicle travel lanes and landscaped median, “That’s a lot of width. I don’t think people realized there’d be a bike lane on both sides of the highway. Could we just do a nice, wide, protected bike lane on one side of the road?”

She didn’t receive an answer, but Public Works Director David Summers said he favors “an overlay of the entire project, not just in segments. That way, people could see exactly what it would look like and how close [the road] would be to their yards. We could do a 15-percent design and then get public comment on it.”

Sanford said they’d also look at each Old Lee intersection and their accident histories before designing each one. But McMahon said they’d need survey information from the preliminary-design work before they could do the overlay of the whole road.

Mayor Scott Silverthorne asked how much it would cost to proceed, and Summers said just surveying the whole corridor would be about $100,000 and would produce an abbreviated, preliminary plan to bring back to the Council. Agreeing, Greenfield said, “I think it’s important to get a survey of the boundaries so we have accurate information. Then we can bring it back to the community to see if it’s what they really want.”

The Council members then unanimously agreed that staff should go forward with the $100,000 survey and, afterward, return to them with the results.