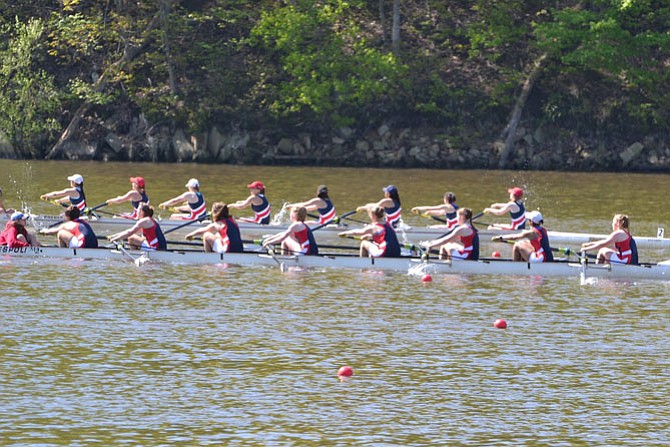 The boys’ freshman boat sprinted down the 1,500-meter course to win its heat in the morning in 5:11.07. Facing the fastest boats in the state for the afternoon final, the freshman boys once again turned on the power, crossing the finish line almost two seconds ahead of rival St. Albans. With a final time was 5:03.5, the boys claimed the gold medal and brought back to Alexandria the championship trophy.

The frosh 8 were not the only Titan boat to visit the medal dock at Saturday's Championship Regatta.

The T.C. girls’ novice 8 boat won its heat and came in a close second behind Lake Braddock to capture a silver medal, with a time of 6:01.01. Members of the novice 8 include coxswain Paula Filios, Chloe Marsh, Anna Jane Guynn, Elspeth Collard, Blythe Markel, Charlotte Milone, Marley Osborne, Madeline Kasoff, and Sophie Rust. Their coaches are Cathy Hott and Chris Ottie.

The boys’ third 4 boat earned another silver medal for the team, with a strong showing of 6:21.2. McLean took the gold in this competition. Members of the boys’ third 4 include Anthony Burke, Hatem Elnahas, Ahmad Shujah, Dawit Haile, and Kai Linehan (coxswain).