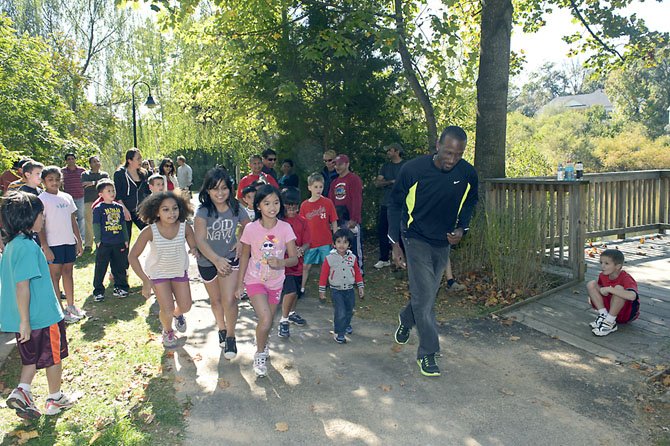 Participants, including two-time Olympian Moise Joseph, in the 2012 fun run.

Although expansions are planned, money is tight, so two young brothers—Rohil and Samik Bhinge of Fairfax—are raising funds to move things along.

(From left) are brothers Rohil and Samik Bhinge.

It’s on the trail around the community pond and the address is 11635 Forest Hill Court in Fairfax. Participants should arrive 15 minutes earlier to find parking on that street or on Forest Hill Drive and walk up to the pond.

Each lap is one-fifth of a mile, so five laps equal one mile.

“People can do as many laps as they want, and they can run or walk,” said the boys’ mother, Meena Bhinge. “Last year, 35 children and 23 adults participated and we raised $1,315. We hope to double that amount this year.”

THOSE WANTING to join the fun run pledge whatever monetary amount they want to, per lap. Participants may sign up at www.fairfaxfunrun.com.

Chessie’s currently contains a Tiki Village playground including a fully accessible, 2,000-square-foot tree house. But a fully accessible carousel and a picnic pavilion are also planned when there are enough funds. 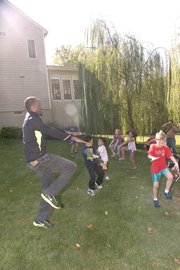 Moise Joseph and some children warm up before last year’s fun run.

Rohil, 9, and Samik, 8, in fourth and second grades, respectively, at Fairfax Villa Elementary were at Chessie’s last summer when the first section of it opened. And that’s when they knew they wanted to help.

“There were maps showing what would be in the next stages, and Rohil asked someone from the [Fairfax County] Park Authority when it would be finished,” said Bhinge. “They said they needed more money to do it, so he decided he wanted to do something.”

Initially, Rohil figured he’d donate the money in his piggy bank, but quickly realized a lot more funds would be needed. “He remembered his school had raised money for the PTA by having a fun run,” said his mom. “So he explained the project to his classmates and Samik told his friends, too. They also sent handwritten letters to local officials. Their goal was to raise $100.”

“My sons enjoy running,” she said. “And because they do, they want to eat healthy, so it changed their whole lifestyle and got them to have good nutrition and be active.”

The first BIG fun run was in October 2012. “I got permission from our homeowners association to have it around the trail around our community’s pond,” said Bhinge. “We had a good turnout, but the highlight was [county] Board of Supervisors Chairman Sharon Bulova coming to the event. This was special to Rohil.”

Bulova, who’s also a runner, walked the ceremonial first-lap with Bhinge and some of the homeowners’ association board members. Then two-time Olympian Moise Joseph, who coaches Rohil’s and Samik’s track club, did the fun run with the children.

“The family recreation area at Lee District Park is a countywide destination for children of all ages, and there’s enormous potential for future development there,” said Barbara Nugent, director of the Park Authority’s Park Services division. “So any time we get the opportunity to partner with others—including a child who understands the value of play—is critical to our success in meeting the needs of the community.”

Bhinge says the whole thing has been a “great learning experience” for her children. “The fun run required a lot of commitment, and Rohil and Samik were willing to help the community by raising money,” she said. “They learned about managing a project and networking, and Rohil built the Fairfaxfunrun website, himself.”

MOST OF ALL, though, said Bhinge, “They learned to be more giving. And now, they’re constantly looking for other ways to give. For example, if we’re in a restaurant that’s collecting for something, Rohil wants to donate. He’ll even do chores around the house to raise money to donate. He says, ‘Every little bit will count.’”

“My husband Deepak and I are very proud of both boys. For them, it’s all about helping other people. This project has totally changed the way they think; and when they grow up, it will always stay with them.”