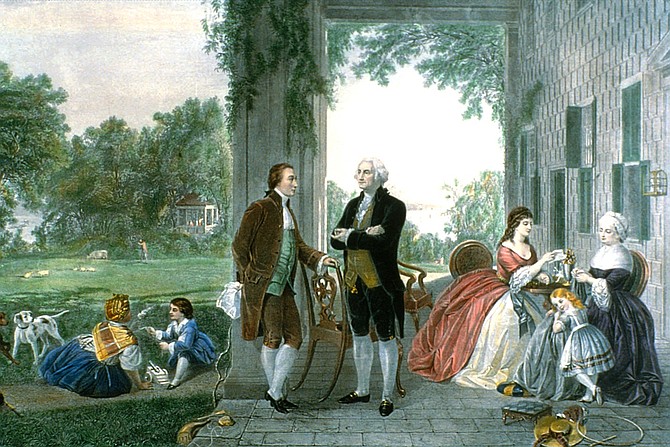 Excerpted from “A Son and his Adoptive Father: The Marquis de Lafayette and George Washington” 2006 exhibition at Mount Vernon.

So passionate was the Marquis de Lafayette to join the fight for independence in the American colonies that — at his own expense, against the wishes of family and king, and without the knowledge of his wife — he set sail on April 20, 1777 for a place he had never seen. The inexperienced 19-year-old French nobleman spoke no English but studied the language on his journey. In Philadelphia on July 31, 1777, Lafayette met George Washington, then 45 years old, and the two men formed a life-long friendship despite differences in age and nationality. They were united by a common belief in individual liberty and a democratic society that has set them apart as two of the greatest leaders in modern history. Lafayette found in Washington a father figure (his father was killed in battle when Lafayette was only two). To Washington, who had no children of his own, the courageous Lafayette met his expectations of the ideal son.

Like Washington, Lafayette served without pay, supporting himself and his troops. From Lafayette’s initiation on the battlefield at Brandywine to his critical role in bringing France into the war as an ally and the decisive victory at Yorktown, the two men’s mutual respect and admiration grew. In a 1784 letter to the marquis, George Washington wrote, “It is unnecessary, I persuade myself to repeat to you my Dear Marqs. the sincerity of my regards and friendship, nor have I words which could express my affection for you, were I to attempt it."

In the years following the Revolutionary War, the families exchanged gifts and corresponded frequently. Lafayette’s strong abolitionist views no doubt influenced Washington’s evolving attitudes toward slavery. Lafayette returned to America in 1784 to visit his “family” at Mount Vernon. During the French Revolution, Lafayette fought for the same freedom and equality he had seen in America. As commander of the National Guard in Paris in 1789, Lafayette obtained one of the keys to the infamous Bastille prison, which the French revolutionaries had destroyed. With profound emotion, he sent it to Washington as “a tribute Which I owe as A Son to My Adoptive father, as an aid de Camp to My General, as a Missionary of liberty to its patriarch.” Through bankruptcy, prison, and exile, Lafayette clung to Washington’s example of character and leadership.

At the invitation of President James Monroe on behalf of the American people, Lafayette returned to the United States as “the Nation’s Guest” on Aug. 15, 1824. His landing at Castle Garden in New York was the first of many exuberant celebrations during his 13-month visit. Lafayette received numerous honors and was the first foreign dignitary to address Congress. In Lafayette, Americans saw a living link to George Washington and the glories of the founding era. During the trip, Lafayette reconnected with his American family – the Washingtons. He visited Mount Vernon to mourn at Washington’s tomb and to embrace the descendants of George and Martha Washington. Although Lafayette declined a soldier’s request to remain in the United States to be buried at his death alongside Washington, Lafayette did return to France with a trunk of American soil for his grave.

Much as France and America had mourned the death of George Washington in 1799, the two countries were brought together again in grief at the loss of Lafayette on May 20, 1834. The chambers of both houses of the U.S. Congress were draped in black. As the years passed, the milestones of Lafayette’s life — particularly those he shared with Washington — were memorialized in solemn celebration.

As the Hermione sails past Mount Vernon on June 9, it will pass the “Lafayette bed chamber” on the second floor of the Mansion, which faces the Potomac River. Lafayette stayed in this room during his 1784 visit to Mount Vernon. Today, visitors can pay their respects to the Marquis — the noble “Friend of America” — on a tour of Mount Vernon, where they can see the Key to the Bastille sent by Lafayette and the Lafayette Bedchamber.