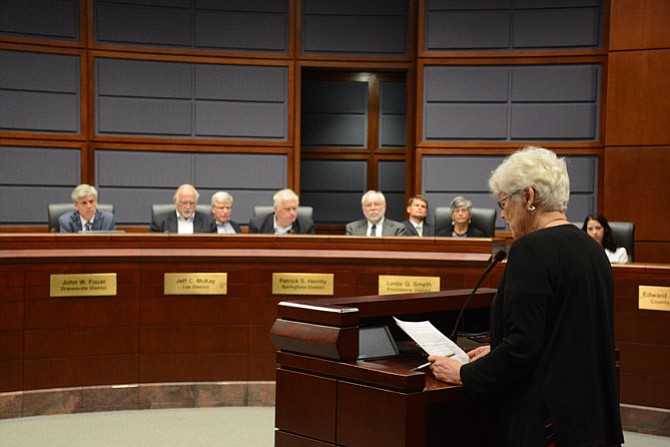 Deborah Moronese of Vienna said a disagreement with her son over his use of Wi-Fi in their home prompted him to call Fairfax County Police. When officers arrived on a night in January earlier this year, Moronese said they interrogated her, followed her up to her bedroom, handcuffed her, dragged her back downstairs and screamed at her to stay seated.

“I was absolutely outraged,” she said, adding that she had “no idea what they were trying to accomplish” and officers “physically, mentally berated me in front of my son.” Moronese said she wasn’t arrested, nor was anything resolved.

Her story was one of 20 presentations during a May 18 public forum of the Ad Hoc Police Practices Review Commission held at the Fairfax County Government Center. Citizens had the option of signing up in advance or on the night of the meeting.

The commission began meeting in March after being established by the Board of Supervisors to review police practices for use of force, the release of information and how officers interact with mentally ill individuals.

The county was facing increasing public outrage over how it handled information regarding the death of unarmed Springfield resident John Geer. Geer was shot and killed in August 2013 by Fairfax County Police Officer Adam Torres, however Torres’ name and details of the incident weren’t released until earlier this year.

Remarks from the public speakers followed brief reports from several subcommittees of the commission that have already held public meetings. The concerns of families coping with adult children with mental illness was a recurring theme at the forum.

Commission chairman Michael Hershman said that while the commissioners represent a great depth of experience, “We’re not the fountain of all knowledge. We want to hear from the public in Fairfax County, the concerns, recommendations you might have.”

George Becerra of Burke expressed concern about the composition of the commission, as well as the tight timespan in which they’ve been tasked with providing a report and recommendations on a breadth of issues to the Board of Supervisors.

Claire Guthrie Gastañaga, American Civil Liberties Union of Virginia executive director, addressed public safety problems from a national perspective, including the over-incarceration of people with mental illness. She also spoke about the need to “shift from a culture of secrecy to a culture of transparency.” Without a shift in the current paradigm, Gastañaga said, “trust is going to be something that we won’t see.”

Yani Yancey of Reston said, “While it may be true that most people feel safe and protected by police in Fairfax County, there are more who feel the reverse every time there’s another incident like the one that inspired this commission. It doesn’t help that both the police department and Fairfax County’s elected officials appear more concerned with covering up bad acts, bad policies and bad cops than they are with addressing bad acts, bad policies and bad cops.”

Carol Bashore of Annandale has an adult son with an eight-year history of mental illness. She spoke about how valuable crisis intervention training for officers “has been invaluable to families like mine that rely on police in domestic situations when my son’s behavior rises to the level we need help. Police are the first responders in a mental health crisis.” When calling the police during an episode, she said it’s crucial to request officers who have had that specific training. “We’ve been blessed to have them respond each time — each could’ve had a far different and very detrimental outcome,” Bashore said. She continued that she was “repeatedly impressed by the calm demeanor officers who’ve helped us many times have used.” Bashore called for additional training for officers because “the skill of communicating with someone in a psychotic state does not come naturally.”

Joanna Walker of Oakton is the mother of a 27-year-old with bipolar disorder. “We’ve had many experiences, some including with the Adult Detention Center and with the police,” she said, “some of which could’ve gone better had people had more training.”

Michelle Evans, formerly of Burke, said that she was abused by her husband and then falsely arrested for domestic abuse herself after she called 911. “The Fairfax County Police Department continues to re-victimize me in order to protect an officer that made a litany of mistakes then perjured himself in a court of law to conceal his misconduct,” she said. Evans called for civilian oversight of the police department and “drastic changes to Virginia’s [Freedom of Information Act] exclusions that allow police departments to conceal and withhold information from citizens.”

Mary Tracy of Mount Vernon said: “I’m here tonight because I believe our police department is not quite the poster child our leadership would have us believe. We may not have riots on the street, but there’s a growing perception the police department leadership is arrogant and out of touch.” Tracy recommended body cameras for officers, prohibiting arrest quotas, ensuring citizen complaints are heard and establishing a citizen oversight body.

Michelle Evans, formerly of Burke, tells a personal story of her arrest for a domestic crime and subsequent legal challenges with Fairfax County Police. She said there’s a need for civilian oversight of the Police Department and changes to Virginia Freedom of Information Act exclusions.

Michael Pendrak of Annandale advocated for additional crisis intervention training and training tools for police officers. This, he said, would help shift the paradigm “from command and control back to protect and serve.”

Gordon Dean of Herndon is the father of a young woman with schizophrenia. He was critical that in the police department there are “not nearly enough officers who can safely deal with mentally ill individuals.” Dean also addressed the difficulty of obtaining details from the police about events involving mental illness, even ones that occurred in their own home.

Phil Boughton of Mount Vernon told the story of Fairfax County Police officers entering his home with guns drawn, looking for his son with bipolar disorder who had failed to appear for a court date. “Right now I would invite 98 percent of them over to my house for dinner,” he said, referring to officers in his local Mount Vernon district, “so that’s not the problem here. The problem is there’s a few of those folks who have way too much testosterone, I think they’re attack dogs.” Boughton is a former Navy pilot. “I didn’t fly fighters over Vietnam to be threatened by a Fairfax County police officer,” Boughton said, adding that one officer threatened to shoot his dog. His letter to the police chief detailing the incident was never answered. “I wanted to be sure the leadership knows that some of these [officers] are out of control.”

Burnette Scarboro of the Mount Vernon area of Alexandria wanted to call attention to “profiling that still exists, particularly for our African American males,” she said. “I don’t get to sleep until my son reaches his destination. Please don’t let this be buried under the more higher profile cases that do exist.”

Mariane Herndon of McLean referenced a recent public hearing on a noise ordinance. She requested that “the Police Department and Animal Control officers make it their practice to indicate statistically the breakdown of animal-related [noise] calls that they receive on an annual basis and break them down as to whether they are for domestic or wild animals.”

Robert Rowan of McLean said his own experiences with Fairfax County Police have been good, but he was disturbed that the police would resist a civilian oversight board. He said that there should be a return to “the basics — We the people.” Rowan continued that this is a “country of laws, not of the individual. The Police Department has to embrace that fully. The way that’s done is transparency.”

Heather Davies is the parent of a W.T. Woodson student, and became involved in mental health issues after a student died of suicide there. She said she’s “concerned that while there’s a need for diversion” for individuals with mental health problems away from jails, there also “needs to be thought put into treatment services.” She suggested the possibility of using the Northern Virginia Training Center as a temporary drop-off point for mentally ill individuals to receive treatment rather than going to jail, or redeveloping the facility (scheduled to close in March 2016) as a location for enriched mental health services.

Cody Claxton of Vienna recommended the Board of Supervisors ban all civil forfeiture. He also called out the “excessive” use of special operations units “for domestic disturbances or to raid poker games in McLean.” He added, “We’re citizens, not targets.”

Phil Boughton of the Mount Vernon area of Alexandria tells a personal story of Fairfax County Police entering his home with guns drawn and aggressively searching for his son who has bipolar disorder.

Dan Heily of Great Falls called for Internal Affairs to be a separate career service for officers and that the head of Internal Affairs be on the level of Chief of Police. As to the work of the commission, he said, “Given that so many of your members have a vested interest to protect, I suggest the following: Produce a majority report that states all procedures are fine. Then produce a minority report by those without a vested interest and have that minority report to contain improvements.”

John Lovaas, an alternate Commission member for Nicholas Beltrante, said, “It was a pretty interesting sample, people talking about interactions with officers not interested in protecting and serving but showing power.”

Board of Supervisors chairman Sharon Bulova agreed that “It was a great opportunity, I enjoyed listening, hearing these perspectives.”

Bulova said in response to the calls for a civilian oversight body, “I’m interested to hear from the members on models that have have been effective in other jurisdictions. It’s something our board has been reluctant to do.”

Whether the board being provided with strong examples could turn the tide, Bulova said, “That could be the case.” She added they would seek incidences of “what would the oversight board look like, how would it work?”

After the final speaker, commission chairman Michael Hershman said the forum, “has been everything I hoped it would be. I’ve learned a lot. It’s given me, my fellow commissioners a lot to think about, a lot to work with.”

Hershman continued, saying by the end of the meeting, he hoped citizens “will walk away thinking you still can contribute.”

The next meeting of the full Ad Hoc Police Practices Review Commission is scheduled for Monday, June 22 at 7:30 p.m. in rooms 9 and 10 of the Fairfax County Government Center, 12000 Government Center Parkway in Fairfax. All meetings are open to the public. More information, including video of previous meetings, agendas and materials presented, can be found at www.fairfaxcounty.gov/policecommission.