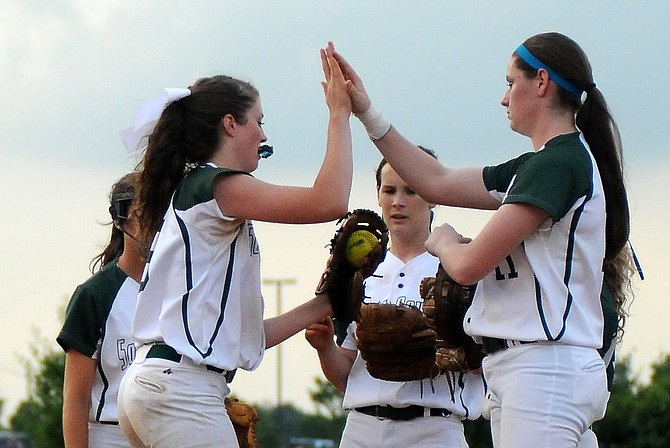 South County shortstop Cara Yates, center, drove in the game-winning during the Stallions' 2-1 win over South Lakes in the opening round of the 6A North region tournament. Photo by Louise Krafft.

With the score tied and the bases loaded in the bottom of the seventh inning, the defending state champion South County softball team had the chance to finally shake the up-and-coming South Lakes Seahawks and advance to the 6A North region quarterfinals.

Next up in the Stallions' lineup: Cara Yates.

Did head coach Gary Dillow have any advice for his shortstop?

Yates came up clutch, driving in the game-winning run with a single as the Stallions defeated the Seahawks 2-1 on Friday in the opening round of the regional tournament at South County High School.

A single by South County second baseman Sydney Haas, a walk to pitcher Aubrey Bates and a single by center fielder Victoria Figueroa loaded the bases with no outs in the bottom of the seventh, setting the stage for Yates. The senior shortstop fell behind 0-2 before pulling a pitch through the left side of the infield.

“I was just pretty much looking to get the ball in play because I felt like if I just hit it hard somewhere we would get a run in,” Yates said, “and if I didn’t, I knew the people behind me would.”

South County will travel to face Robinson at 6:30 p.m. on Monday in the region quarterfinals.

Yates and sophomore Haas each finished 2-for-3 at the plate. Figueroa, a freshman, went 2-for-4. Senior third baseman Elyssa Dunn and Bates each had a double, and senior first baseman Riley Wilkinson had a single.

Yates’ walk-off single gave South County its only lead of the night against a South Lakes team making its first regional tournament appearance in at least five years. The Seahawks, the No. 3 seed from Conference 6, took a 1-0 lead in the top of the third inning, when third baseman Jazmyn Stokes’ single and a South County error allowed a run to score.

The Stallions, the No. 2 seed from Conference 7, tied the score during the following half inning when a South Lakes error allowed a South County baserunner to cross the plate.

Bates took over from there, surrendering just a pair of infield singles during the final four innings. The junior right-hander earned the win in the pitcher’s circle, allowing one unearned run on seven hits while walking one and striking out four in seven innings.

South Lakes had at least one runner in scoring position in four separate innings, but managed just one run.

“She did great,” Dillow said about Bates. “She didn’t have her best stuff tonight and she just kind of battled through. They had some good at-bats and they had quite a few baserunners. Aubrey pitched out of jams when she got into them. I’m very happy with her performance tonight.”

Former South County standout Rebecca Martin was the Stallions’ go-to pitcher in big games during the previous four seasons, culminating with a victory in the 2014 state championship game. Did Bates feel any pressure pitching on the regional stage?

“I didn’t really feel much pressure,” she said. “I just went into it like any other game.”

South Lakes senior Tess Rayle allowed two runs --- one earned --- in six-plus innings in the pitcher's circle and went 2-for-4 at the plate during Friday's regional tournament game against South County.

“These guys truly turned the program around in the last few years,” said first-year head coach Carlos Soto, who spent the previous six seasons coaching the JV program. “South Lakes hasn’t had a great history of getting his far.”

Senior pitcher Tess Rayle gave the Seahawks a chance to win both in the circle and at the plate. The right-hander allowed two runs --- one earned --- on nine hits in six-plus innings. She walked one and struck out three.

“I don’t know what their pitcher was throwing,” Dillow said. “She was very crafty. [She] kept us off balance. We didn’t get a whole lot of good swings on the ball.”

At the plate, Rayle, South Lakes' leadoff hitter and only senior starter finished 2-for-4, including a double to deep left-center in the top of the first inning.

“At the beginning of the season, Tess was probably batting fifth, sixth,” Soto said. “She worked her way up to bat [in] the leadoff spot and she was our spark almost every time she was there.”