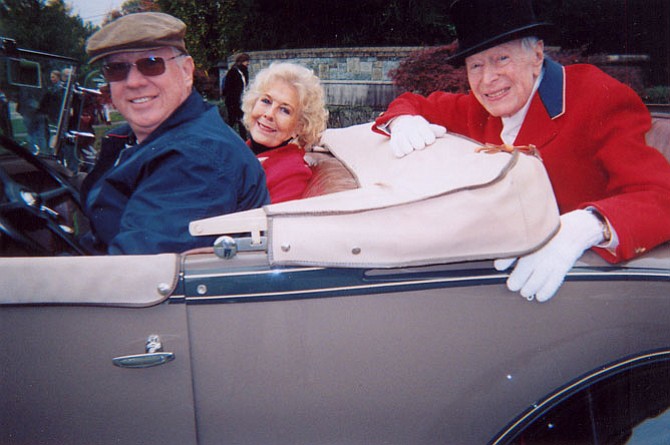 Seated in the rumble seat of a 1931 Model A Ford Roadster is Austin H. Kiplinger, the Grand Marshal of the 2015 Potomac Day Parade. Kiplinger, 97, is wearing Potomac Hunt formal hunting attire. He is a former hunt committee chairman and a member since 1961. Bonnie Nicholson, and car owner/driver, Chuck McDonald, are seated in front. Photo by Cissy Finley Grant/The Almanac

There was quite a crowd gathered at Normandie Farm Restaurant last Thursday evening for the Annual Potomac Chamber of Commerce annual awards dinner. It was apparent Adam Greenberg, Chamber president, and the Chamber Director of Operations Jennifer Matheson, had devoted hours of research to ensure the 2015 awards were well deserved.

Matheson was active in multiple roles throughout the evening, among them, greeting more than 100 attendees who came for 6 p.m. cocktails and hors d’oeuvres followed by dinner and awards.

Greenberg welcomed everyone following an hour of conversation time when guests mingled about the room. This included Aruna Miller, who represents Potomac’s 15th District in the Maryland House of Delegates, the same position held by the late Jean Cryor, whose many friends were also in the gathering. Miller was among those congratulating the four award recipients including Steve Ornstein, Dr. Susan D. Rich, Alexander Brown and Eleanor M. Cain.

Chamber vice president Fred Goldman presented the first award of the evening to Steve Ornstein, the “Business Person of the Year.” While Ornstein took the microphone and said he was the second generation of his family to be involved with Edge Floral Event Designers, once located on Falls Road in the Potomac Village Shopping Center, his audience dined on salad, steak, fish and dessert.

His mother, Lois Ornstein, whom he introduced to the gathering, was one of the founders of the business for which he has worked for over 25 years. She is still involved and works daily.

“We are a special events floral designing company. The hub of our business is the floral and décor of special events in Potomac and surrounding areas,” he said in an interview prior to the event. Ornstein, treasurer of the Potomac Chamber of Commerce, moved the business to Shady Grove Road about six years ago. However, he has retained his involvement in numerous local activities including the Diener School, Hospice Caring, Juvenile Diabetes and, of course, the Potomac Chamber.

The second award presented was given to a Potomac psychiatrist. “ I am moving to a small Potomac farm where I hope to include llamas, alpacas and some rescued horses to be used for farm animal therapy,” said Dr. Susan D. Rich, a Potomac child and adult psychiatrist who was named “Citizen of the Year.” Presently, at her Potomac home she keeps therapeutic goats and chickens.

Professionally, Rich works with both young and old patients devoting her expertise treating “youth and families affected by Prenatal Alcohol Exposure.” Her philanthropic activities also caught the attention of Chamber members when they learned of her involvement with Girl Scouts and Earth Day events.

It was the third award recipient of the evening that brought the crowd to its collective feet.

In his senior year at The Bullis School, Potomac, Alexander Brown has accomplished more than many do in a lifetime. At 17 years old, he recently earned his pilot’s license and has applied to the U.S. Air Force Academy which prompted one person to remark, “Whoever would reject him would have to be permanently grounded.”

A straight “A” honor student at Bullis, Alex is a member of the Student Government Association. He is also an accomplished musician and earned a superior rating while playing an alto saxophone at the Maryland State Music Festival. Twice, he has been named the Maryland State Greco-Roman Wrestling Champion, an event his mother, Claudia, admitted getting, “a little nervous watching.”

Alex’s academic, musical and sports prowess has not deterred him from philanthropic interests. He volunteers with KEEN (Kids Enjoying Education Now) and dedicates time to Bullis lower school students. He also volunteers at A Wider Circle and at Manor Care.

It is with small wonder that those seated at Alex’s table during the annual Potomac Chamber Awards Dinner, including his parents, Claudia and Christopher Brown, his brothers, Aryemis, 11, and Austin, 8, (also Bullis students); his grandmother Sue Riley; aunts, Andrea Simpson and Janna Riley and Bullis assistant and associate headmasters, Dr. Michael Reidy and Timothy Simpson, were please to congratulate the Chamber’s “Youth of the Year.”

“I would like to thank my teachers, parents, grandparents and brothers,” Alex concluded.

The “Lifetime Achievement Award,” the final presentation of the evening, was given to Eleanor M. Cain, a person the program so aptly stated, “A name just about everyone in Potomac knows.”

From the list of achievements mentioned, if you have lived in Potomac for any length of time you would certainly have encountered her, if not while planting flowers in the 75 urns throughout the Village, or perhaps at Great Falls Tavern where she is a board member and where she was active in raising money for the C&0 canal boat.

Another of her interests was the Potomac Theatre Company which gave 25 years of excellent entertainment to this community and beyond. She has also served on the Potomac Master Planning Committee, “Influencing key areas of development and helping to protect the Potomac River, watershed and environment,” the Chamber stated.

Cain’s family and friends cheered her recognition and several came from out-of-town for the occasion. Her son, Stuart Pisarra from Del Ray, Fla., grandson, Cory, a sophomore at Florida Atlantic University who plans to become a cardiac surgeon; her brother Michael McConihe, and his wife, Bruce, who flew up from Vero Beach, Fla., and daughter, Suki Gadwah, from West Virginia were all there, as were local residents, her son Tony Pisarra and his wife, Tricia, and family friend, Andrew Ellis.

Captain Damian Alexander of the Cabin John Volunteer Fire Department presented Cain with an honorary membership to the fire department. It would surprise no one who knows Elie Cain to see her one day standing on the back of a fire engine, on call, when help was needed.

One who missed the “festival” was Grand Marshal of the Potomac Day Parade, Austin H. Kiplinger. Kiplinger, 97, former editor of The Kiplinger Magazine and The Kiplinger Letter, has been involved in Potomac activities since 1961. He was former chairman of the Potomac Hunt hunt committee, The National Symphony Orchestra, the Washington International Horse Show and for many years, with his late wife, Gogo, sponsored many fund raising, philanthropic events at their River Road home, Montevideo.