‘This is Curable, so I’m staying positive’ 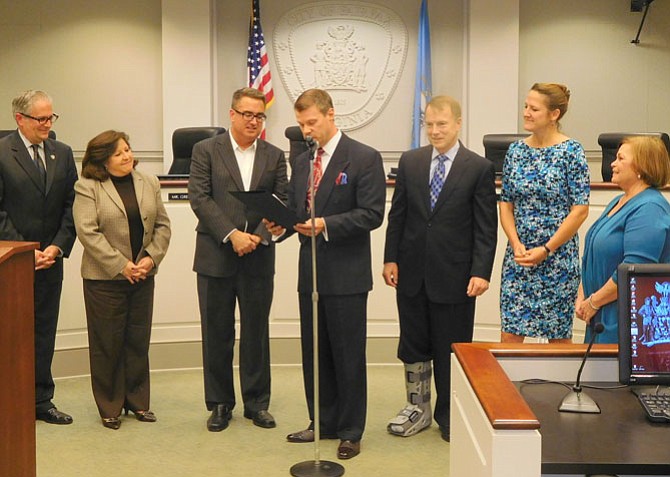 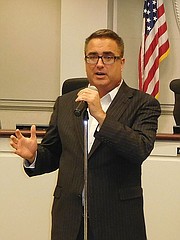 City of Fairfax Mayor Scott Silverthorne is no stranger to challenges. After all, he served 18 consecutive years on the City Council and is currently in his second, two-year term as mayor – including all the hard work and long hours that job entails.

Now, though, he’s facing his toughest challenge of all. At Tuesday night’s City Council meeting, he announced publicly that he has cancer. It was an unusual way to spend his 50th birthday, Nov. 17, but the popular City leader vows to fight this foe with everything in him and says his prognosis is quite good.

“It’s serious, but it hasn’t spread, and my doctors tell me it’s highly treatable,” said Silverthorne. “It’s not going to affect my duties and I’ll continue as mayor – and fully intend to run for re-election.”

He has a malignant tumor on his neck that’s been diagnosed as squamous cell carcinoma, a common form of skin cancer that develops in the squamous cells comprising the skin’s outer layer, or epidermis. It is often caused by exposure to ultraviolet rays, such as from the sun, and an estimated 700,000 people in the U.S. are diagnosed with it annually.

IN SILVERTHORNE’S CASE, it started in his throat. About four months ago, he noticed a bump on the lower left side of his neck. “At first, I thought it was an infection or a cyst,” he said. “But it’s gotten bigger, more pronounced and more noticeable, in the last few weeks. And now it’s red and as big as a golf ball; it’s also tender, so it hurts to shave there.”

Doctors did a biopsy last week, and that is when Silverthorne received his diagnosis. This week, he’ll have a PET scan – a form of imaging used to detect cancer’s progress – and will begin six weeks of intense treatment. “I’ll have radiation daily and chemotherapy once a week,” he said. “But the good news is that the cancer didn’t spread to my lymph nodes and is localized in my neck.”

In recent months, friends and colleagues have noticed a thinner, svelte Silverthorne, and he confirmed that he’s lost 25 pounds. “I feel good – I just don’t have an appetite,” he said. “I used to be able to eat a whole pizza; now, I’m lucky to eat two or three pieces. And I have a bit of fatigue.”

But, he added, “I’ve got great doctors, and they said I should be just fine. They’re expecting me to make a full recovery. I’ll probably lose my hair – and I may even lose another 25 pounds – but I plan to maintain my sense of humor. And I advise anyone who suspects something is wrong with them to see their doctor and not wait.”

Meanwhile, Silverthorne wanted to inform City residents about his condition, and he is pleased that his doctors gave him a “green light” to continue working. “I think the busier I am with City business, the better I’ll be,” he said. “This is curable, so I’m staying positive. I’m tough and resilient and should be back to my own, fighting self by February.”

Tuesday night, he told those at the Council meeting, plus everyone watching it on TV at home, “My family, friends and I debated whether this was a public or private matter and whether I should share this news,” he said. “But I believe in transparency. And my doctors tell me I’ll be a much skinnier and healthier mayor by my next re-election campaign.”

Stressing that he believes in the “positive power of prayer,” Silverthorne said he’d appreciate people’s prayers and good wishes for him. “It’ll be a tough couple of months, but I’ll power through it,” he said. 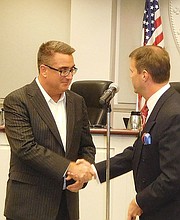 He also acknowledged the invaluable support of his longtime friend and Council member Janice Miller. She lost her husband to cancer three years ago and has helped Silverthorne come to grips with his diagnosis and bravely face what lies ahead. Noting her “friendship, camaraderie and joking,” he said “I couldn’t have done it without her.”

THEN IT WAS TIME to proceed with that night’s business before the Council, but first came a special celebration. Councilman Jeff Greenfield called his colleagues and Silverthorne to join him by the podium. He then read a warm and humorous proclamation listing the mayor’s attributes and achievements and proclaimed Nov. 17, 2015 as “Scott Silverthorne Day” in the City of Fairfax.

The Council members then presented Silverthorne with a birthday cake, complete with lighted candles, and surprised him with a trumpeter who walked forward and played “Happy Birthday to You” and “For He’s a Jolly, Good Fellow” while everyone in the room sang along.