Proceeds from Rescue Reston’s First Golf Classic and Nature Walk to help in legal fight against development of Reston National. 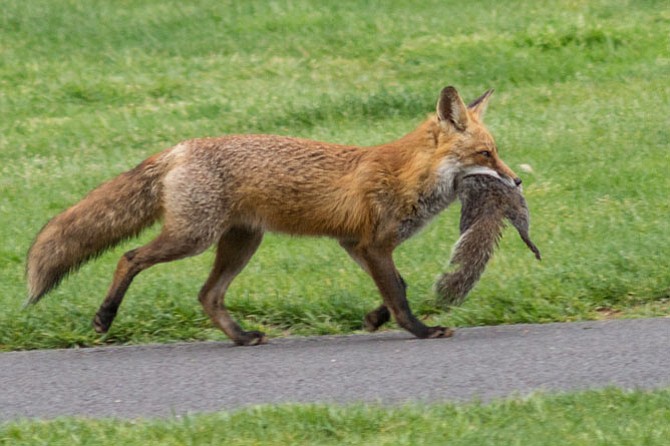 A red fox carries a meal of a squirrel at Reston National Golf Course. Photo by Ed Hass 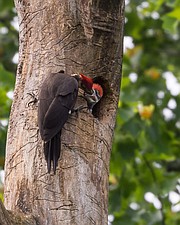 Pileated woodpecker feeding young in a nest hole in a large tree along Reston National Golf Course, one of the species that needs large, mature trees.

Proceeds from these events will help fund efforts to block residential development proposed for the golf course.

About 112 golfers participated and more than 40 people went on the nature hike.

Connie Hartke, of Rescue Reston, called it “an incredible show of support,” and “beyond expectations for a first-time event.”

Edie Addelston, a 29-year Reston resident, participated in the nature hike. “Really enjoyed it and the folks that were in the group were enjoyable,” she said. “I saw lots today that I have never seen in Reston,” adding that Monday was a perfect weather day.

Rescue Reston is a grassroots volunteer organization opposing redevelopment of Reston National Golf Course into residential housing or any site development other than a golf course or comparable open space.

“What better way to tell the investor-owner of Reston National Golf Course (RNGC) that you support Reston's planned recreational open space than a fun afternoon golfing or hiking, followed by dinner on the clubhouse patio,” according to Rescue Reston.

THE NEXT HEARING regarding Reston National Golf Course is in Fairfax County Circuit Court on Oct, 23 at 2 p.m. Fairfax County, Reston Association and numerous petitioners who border the golf course property have filed appeals asking for a review of the Board of Zoning Appeals (BZA) April decision regarding how RN Golf Management must proceed to potentially turn the 166-acre Reston National Golf Course into medium-density residential housing.

Ed Hass spends the better part of most days photographing the wildlife in and around the course and Bill Burton is a geologist, birder and amateur astronomer.

“I’m pretty familiar with the surroundings here. I’ve lived here 40-some years and I’ve been shooting [photos] since 2008,” said Hass.

Hass knows where the foxes keep their dens along the Reston National Golf Course. He found an occupied den this spring, and when the kits were born he took more than 100 photos.

“That was pretty special. They were real little, they could hardly walk and were so wobbly,” he said. “They didn’t have a clue to what I was. How cool is that?”

Burton and the Reston Historic Trust led a nature walk a couple of years ago.

Burton calls the land along the course, a “maintained environment,” which fosters rich diversity of wildlife.