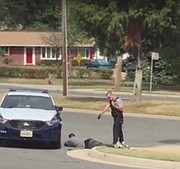 One of two cell phone videos of the incident shows a Fairfax County police officer use a taser on Cansler and then handcuff him, with help from another officer.

Elton Cansler of Alexandria was arrested on Sept. 24 for committing larceny and assaulting a police officer, an incident captured on two independent witnesses’ mobile phones during which the Fairfax County Police Officer used a taser to force him to comply with orders.

Cansler had been approached by an officer and admitted to stealing a pair of sunglasses from the employee break room of SunTrust Bank in the Rose Hill area of Alexandria.

Cansler’s lawyer Victor M. Glasberg submitted a letter to Fairfax Chief of Police Edwin Roessler on Oct. 1, demanding an internal affairs investigation of the incident. In his letter, Glasberg explained that Cansler had cerebral palsy and mental difficulties.

Following the incident, Roessler announced such an investigation would be taking place. On Sept. 28, an expanded release from Roessler concluded, “The officer’s discretion was appropriately used to deploy a form of a less-lethal force and in compliance with all policies and laws in this matter.” The report explained Cansler kept his arms straight against the police cruiser while the officer was initiating the arrest and pushed back against him.

According to a Fairfax County police spokesperson, the Internal Affairs investigation is still underway.

Glasberg responded to the Sept. 28 statement in his letter to Roessler by calling for another investigation “into your and your department’s public, on-line, full-throated defense of what the officer did before your investigation has even gotten off the ground.” (Mr. Cansler has not even been interviewed).

Roessler has not responded to Glasberg’s letter, the police spokesperson said.