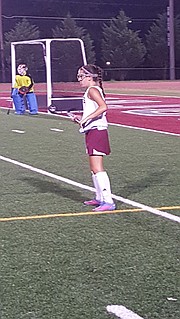 Mount Vernon junior Michelle Diminuco scored both goals during the Majors’ 2-0 win over Stuart on Tuesday.

Mount Vernon participated in the Blast ALS tournament Aug. 26-27 at Lake Braddock Secondary School. The Majors faced Robinson, West Springfield, Fairfax and Centreville during the two-day event, and lost all four games by a combined score of 14-1.

“I think it’s good to get a win on the board, but I was really happy we had strong competition at the tournament,” Edwards said Tuesday. “... Not knocking Stuart or anything like that, but I was glad that we had strong competition early in the season because I feel like it was a good kick in the butt for us to make sure we really worked on some things at practice. I feel like what we struggled with in the tournament, we did a little bit better with tonight.”

“I think it’s really important because I think they need to understand the level of competition,” Edwards said about facing strong competition at the early-season tournament. “We had some good schools in 5A, but I think overall, the [6A] teams that we’ll play on the regular will be tougher and I think they need to feel that early on so they don’t become complacent ....”

While Mount Vernon will face tougher tests, the Majors were happy to get their first win on Sept. 1. Junior and first-year varsity player Michelle Diminuco scored both goals against Stuart.

“It felt good,” Diminuco said about beating Stuart, “because it felt like we worked as a team better and we connected our passes better.”

“It’s definitely a sense of relief,” senior Jessica Miller said. “It’s refreshing to have a win.”

Miller, a four-year varsity player, is committed to Old Dominion University and is one of the Majors’ best players.

Mount Vernon will host Edison at 7:30 p.m. on Thursday, Sept. 3, and will open conference play on the road against Lake Braddock on Sept. 10.

Edwards has experienced success with Mount Vernon as a “big school,” winning three National District championships in a four-year span while competing at the AAA level prior to the VHSL’s six-class re-alignment.

Edwards said she thinks the 2015 Majors can be competitive, as well.

“I think if they improve their technique ... [and] they really understand that they need to focus on the basic skills and do those things well, I think they’ll be strong,” Edwards said. “I think they can finish strong at the end of the season. I really want to be in the top three [in Conference 7].”