Majors move up to 6A North, Conference 7. 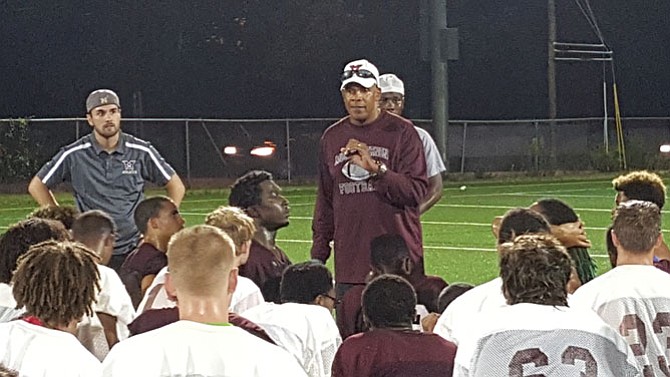 While members of the Mount Vernon football team labored through conditioning near the end of Tuesday night’s practice, head coach Barry Wells urged the Majors to push forward as they jogged up and down the school’s turf practice field.

“Right now,” Wells told his players, “is when I need you to have some pride.”

For the 40 or so athletes who showed up to practice on Aug. 4, pride is about more than just finishing strong during end-of-practice conditioning. It’s about working in the face of long odds to ensure Mount Vernon has a better season than it did in 2014.

The Majors failed to win a game last year, finishing 0-10. Mount Vernon hasn’t experienced a victory since beating Edison on Oct. 4, 2013. Wells said the Majors’ struggles of late have led to difficulties getting new athletes to join the program, but it hasn’t stopped a group of committed players from working to improve.

The Mount Vernon football team is looking to improve on last season’s 0-10 record.

“... At that age, [kids] talk about, ‘Well, the team’s not good; I’m not going to go out.’ We’re fighting that battle, for sure. Thank God we have enough kids that it’s in their blood.”

While Mount Vernon has nowhere to go but up, the Majors’ schedule won’t make things easy.

The VHSL underwent a six-class re-alignment prior to the 2013-14 school year, with many teams from the Northern Region moving into the 6A North region. Mount Vernon, however, was one of a small group of schools that dropped to the 5A level due to enrollment. Football teams maintained their schedule structure for two seasons following re-alignment, meaning the Majors spent the 2013 and 2014 seasons competing as a member of the 5A North region’s Conference 13 while playing a schedule similar to that of their time in the Northern Region’s National District.

The 2015 football season would be the first in which teams would play each of their new conference opponents. But for Mount Vernon, instead of benefiting from a schedule loaded with 5A schools, enrollment dictated the Majors move up to the 6A level and join Conference 7. Instead of conference games against the likes of Marshall, Lee and Edison, the Majors will face Northern Virginia powerhouses such as South County and Lake Braddock.

“I say this year we’ve got something to prove,” rising senior safety Moe Kamara said. “We have to redeem ourselves [and] showcase our talent.”

Mount Vernon’s seemingly winnable games come early in the schedule. The Majors open the season at home on Sept. 4 against Stuart, a 5A program that has finished 2­8 each of the last three seasons. Two weeks later, the Majors will travel to face Thomas Jefferson, a 5A program that went 0-10 last season. Wells said it is important Mount Vernon starts the season with a win against Stuart.

“That first win ... this year more than any other is going to be pivotal for us,” Wells said. “Stuart, physically, we should match up with them. ... They’re going to come in confident. [Head coach] Roy [Ferri] and those guys beat us in a close one last year, so their kids believe they can beat us again. ... I kind of like the way our schedule sets up, especially in the beginning. A win out of the gate this year more than any is going to be critical for us.”

Offensively, Mount Vernon will turn to more of a spread attack. Rising senior Josh McGrigg is the Majors’ most potent pass-catching threat.

“Josh is just a phenomenal athlete,” Wells said. “He’s got blazing speed. He is literally a threat to go the distance every time he touches the ball. I’ll be surprised if by week three, week four they’re [still] kicking off his way because he’s electrifying. He’s got great hands, he’s getting a lot of college looks [and] he’s the kind of guy that will put the team on his back and try to carry us.”

The player in charge of getting McGrigg the ball will likely be rising sophomore quarterback Tim Heltzel.

“He’s got a live arm for his age,” Wells said. “I haven’t seen him under duress. That’s going to be the key, to see how he handles the fire. We’ll have a handle on that real soon. As far as the future goes, if he’s the guy, nothing would make me happier because now we’re investing in the future.”

Wells is hoping TJ Edwards will be a matchup problem at tight end.

Defensively, the Majors operate with a base 4-3 alignment. Centeno, who played middle linebacker during 7-on-7s, will play defensive tackle.

“Having that kind of foot speed, and that kind of coordination is going to help him on the defensive line,” Wells said. “We have to be quicker than people up front. We’re not going to be able to go toe-to-toe and push people around, so we’re going to have to knife and get in the backfield and cause problems.”

Edwards and Renfro will be the defensive ends.

Kamara has a chance to be a standout at free safety.

“Moe is a kid that has had some injury issues over the last couple of years, but he’s worked extremely hard this year and he’s athletic as heck and he’s got a nose for the football,” Wells said. “I’m looking forward to playing teams that want to throw the ball around. Quite frankly, that’s where we should be our best. The teams that want to push us around because we’re going to be a little smaller are going to present some challenges for us.”

While Mount Vernon faces a challenging 2015 season, McGrigg is focused on what the Majors can control.

“As long as we work hard, we’re going to come together,” McGrigg said. “Working hard is always going to bring a team together.”

While this group of Majors doesn’t have past success to lean on, Centeno said Mount Vernon can show opponents this team is different.

“They can believe what they want to believe, but we’re just going to go out there and show [what we’re about],” Centeno said. “We really can’t say look at our past, what we’ve done, we can’t say that. So they can keep thinking what they want to think. Once they see us play, our actions are going to speak for us.”