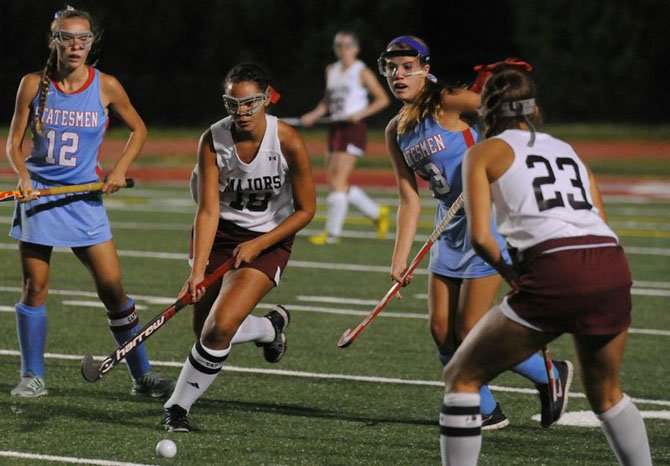 After 75 minutes of scoreless play, Monday’s Mount Vernon-Marshall field hockey game came down to strokes. That’s when Mount Vernon goalkeeper McKenzie Moore noticed a trend and made an adjustment.

“They all had been going over to the right,” Moore said, “so I assumed that one of them was going to be hitting over on the left.”

With strokes tied at 2-all, Moore made her third save of the shootout, setting the stage for senior captain Lindsay Gardiner to end the game. Gardiner converted her stroke, giving the Majors a 0-0 (3-2) victory over Marshall on Sept. 15 at Mount Vernon High School.

Marshall led 2-1 after three rounds of strokes, but Moore saved the Statesmen’s next two attempts, including a diving effort that allowed junior captain Jessica Miller to tie the shootout at 2-all.

How does a goalkeeper approach strokes?

“You just have to stay calm,” Moore said. “Strokes are not designed for keepers to really save, and if you do save it, it’s like you’re a hero. [You can’t] put a lot of pressure on yourself.”

Moore was a three-time hero during the shootout.

The win improved Mount Vernon’s record to 6-1-2, surpassing last season’s victory total of five. After winning three district championships in four seasons, the Majors experienced a rare down year in 2013, finishing with a record of 5-13, including a loss to Marshall in the third-place game of the Conference 13 tournament. The Majors had graduated many of their key players from the 2012 district championship team, and the lack of experience led to struggles on the field.

“I talked to the girls about this at practice that … the way our season went last year was my fault because I didn’t get them enough playing time the year before,” Edwards said.

Senior captain Amber Sable and the Mount Vernon field hockey team surpassed their 2013 win total of five with a victory over Marshall on Sept. 15.

“We’re really trying to work on that this year looking toward the future because we have a big senior class this year and we don’t want that to happen to us again next year.”

While Mount Vernon is back to its winning ways in 2014, Edwards said Monday’s game shows the Majors have areas that need improvement.

“To me, [the win is] kind of bittersweet because I strongly feel a good team wins on the field without the strokes,” Edwards said. “The win in strokes, I’m absolutely happy that we won, but at the same time, it’s not the same to me. … I feel like there are a lot of things that we need to correct.”