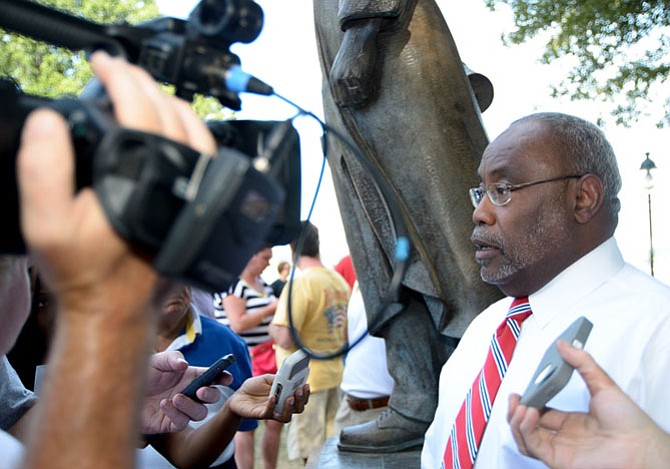 “Though wise men at their end know dark is right

Because their words had forked no lightning they

Do not go gentle into that good night.” 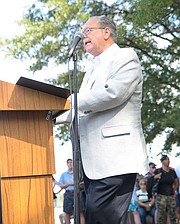 "This city is worth fighting for,” said Euille. “I was born and raised here, and I will not go quietly into the night.”

Euille said the primary issue that drove him back into the campaign was development, specifically a concern that Silberberg could undo the economic progress made by successes like the National Science Foundation and the Transportation Security Administration’s arrival in Alexandria. Though unspoken at the event, one of the major divides between Euille and Silberberg in City Council chambers and in the primary was the development and implementation of the Alexandria Waterfront Plan.

“These [successes] don’t just happen by accident, we have to work for that,” said Euille. “It’s teamwork. It’s collaborative. It’s government. It’s all about leadership. It’s all about making certain that Alexandria continues to move forward.”

A group of supporters gather for Mayor William Euille’s announcement.

After the incumbent mayor lost the Democratic primary in June to Vice Mayor Allison Silberberg, rumors began circulating about a write-in campaign, with a Twitter account for the idea launching almost immediately after the primary. Euille’s response had been muted, neither confirming nor denying his intent until the Waterfront event on Sunday.

At the event, several notable Alexandria Democrats defected from the party. Silberberg’s surprising victory in the primary was largely a result of opposition factions cobbled together against what was seen as unnecessary development. The first members of Euille’s counter-coalition began to emerge at his write-in announcement. Bill Harris, who has served on the Alexandria Commission on Aging, Senior Services board of directors, and the Alexandria Affordable Housing Advisory Committee, criticized Silberberg for her support of neighbors against the expansion of the Woodbine Rehabilitation and Healthcare Center.

“Mayor Euille has led our city through difficult times while expanding our economic base, and ensuring that seniors in the city not only have a voice, but have the services they needed,” said Harris. “I can’t say the same for the Democratic candidate for mayor. She’s been a naysayer on the council against many important projects, but particularly some important to seniors.”

“One concern about Allison is that she lacks experience and is not ready,” said Rich. “She’s only served on council for two years and has had minimal community experience before that. She’s not been involved long enough to understand the budget and the fiscal complexities of the city. More significantly, her views on fiscal issues and growth suggests a lack of understanding and balance. She always seems to be in the mode of keeping everything exactly as it is. I believe she is seriously misguided in believing that growth can be severely limited and at the same time, city services can be maintained or even expanded.”

But Euille’s most notable endorsement so far has come from former mayor and primary opponent Kerry Donley. According to a press release from the “Friends of Bill Euille” campaign, Donley recognized Euillle’s achievement in bringing the National Science Foundation and the Transportation Security Administration to Alexandria as some of the main reasons for his support.

Since the announcement, however, the mayor has remained hushed on the specifics of the write-in campaign. Beyond his announcement on Sunday, Euille said he was not ready to further discuss the details of the upcoming election.

The response by Silberberg was swift but brief. Silberberg said the announcement was not a surprise, that Euille had been making less-than-cryptic references to the write-in campaign all summer. She also claimed that, when she signed on as a candidate, she and the other Democrats signed a pledge not to run as a part of any other party. Technically, as a write-in, Euille is not breaking this pledge, but Euille says his campaign clearly defies the intent of the pledge.

Clarence Tong, chair of the Alexandria Democratic Committee, said that he and other members of the Democratic Committee are “still looking into” whether or not there was a pledge and what it entailed. Tong said he was prepared to follow the bylaws of the ADC and eject Euille from the party, but said that Euille came to them first after the announcement and removed himself as a member, as did Rich and Donley. According to Tong, this would mean that Euille would not be readmitted until the party’s reorganization every two years, but this also means that Euille will not have access to the local or state Democratic resources that Silberberg will.