Hundreds turn out to express gratitude for Robert E. Simon. 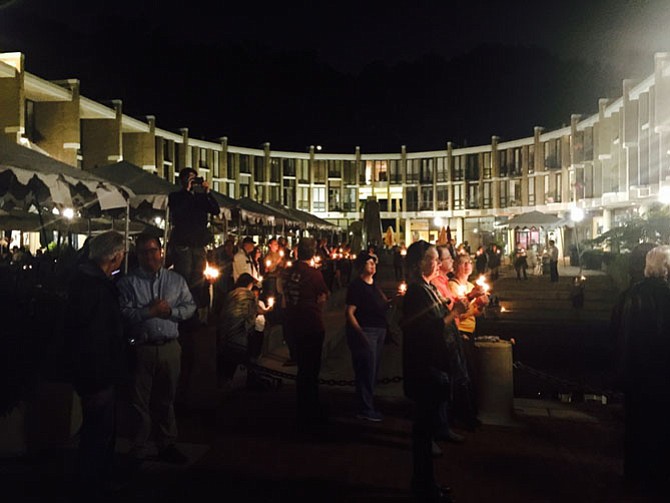 Bob Simon enjoyed telling the story of meeting a child near his statue who asked his parents: ‘How did they get him out of there?’ Others retold the story at the vigil.

Bob Simon’s wife Cheryl Terio-Simon wrote a letter that was read aloud at the candlelight vigil held Friday, Sept. 26 at Lake Anne Plaza in honor of Reston’s founder who died earlier in week.

“Community is what it is all about,” wrote Cheryl. “Thank you for your many expressions of love and support for Bob.”

More than 500 people gathered to express love of Reston’s founder Robert E. Simon and to offer thanks for the impact he’s had on Reston and all of its people.

“He was always there to talk to you, he was so curious until the end,” said Karen Cleveland. “We’re here tonight to celebrate Bob, to thank him, because he’s given us the biggest thing he ever could, Reston.”

THE PLAZA was filled Friday, in front of the stage, by Simon’s statue, by the water and the restaurants.

“I am a kid of Reston. My dad [Patrick Kane] was a city planner and he scoped it out; he knew he wanted to raise a family here,” said Leslie Kane. “I always knew how important he was, but until this week I never realized how many lives were changed by him.”

Tim Ward, pastor of Restoration Church, said Simon would have enjoyed this time together. “Bob enjoyed people getting together on the plaza,” he said. “So many people have been deeply, deeply impacted by his life.”

Casey Veatch called himself and Leslie Kane the original Kids of Reston.

Kane, who still lives in Reston, says she always saw Simon walking around Lake Anne Plaza. “It was fun to watch him pat himself on the head,” of the statue built in honor of Simon and his vision of the plazas. “Thank you, Bob Simon, for an amazing childhood,” she said.

“That guy never stopped and we loved him for sure,” said Veatch. “Two weeks ago, I sat up with him in his room and I can assure you that his mind was as sharp as it ever was.”

Veatch told the well known story of Simon confronting a mob boss who then called Simon, “one tough son of a ….”

Veatch and Kane gave voice to the social experiment of a planned community that welcomed all people of all backgrounds and all economic situations.

“I didn’t know racism or discrimination existed until I went to college,” said Kane.

“None of us understood what racism was,” said Veatch. Amanda Indri, also of Cornerstones, warned the crowd.

“Don’t tell anyone, but I grew up in Herndon,” she said. “But that’s what Reston does to you. It invites you in.”

The Reston Museum is going to give additional chances for Restonians and others to share stories of Reston’s founder.

“I can not tell you what a gift this is that the community can come together,” said pastor Tim Ward.

Mosaic Harmony and Reston Chorale teamed together to sing, “This Little Light of Mine, We’re Going to Let it Shine.”

Saharnaz Farivar, an architect and planner, takes a long look at the statue of Bob Simon. “He was definitely my mentor. He was completely available 110 percent all the time.”

THE CROWD surrounded Lake Anne Plaza, candles shining along the water by Simon’s condo building. Hundreds filled the plaza with light and sounds of appreciation for Bob.

“We will light the candles to remind of Bob’s bright light, to remind us of the impact he had had on us,” said Ward.

Ward could be heard singing among the crowd, “This little light of mine, we’re going to let it shine.”

And with that in mind, Kerrie Wilson said there is still more work to do.

“Bob lay the perfect foundation,” she said, “but not everything was perfectly implemented the way he wanted.”

“He leaves it in our hands to make it happen,” she said.