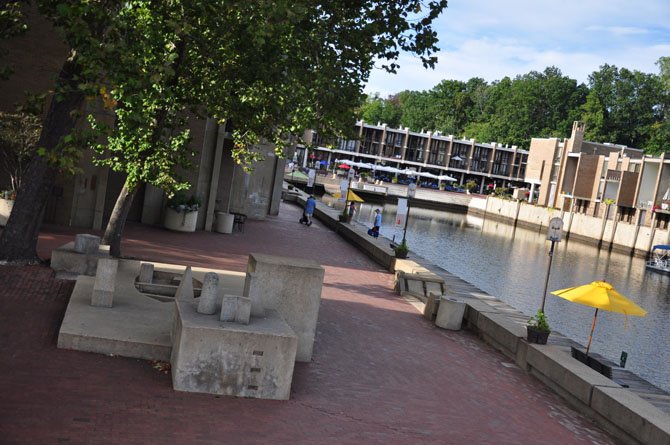 The interactive features at Lake Anne were part of the original design, meant to play into founder Robert Simon’s sense of whimsy. Photo by Alex McVeigh.

Reston — There is a small elevated concrete platform just south of the Lake Anne Plaza. According to the writing on the platform, it was built in 1963. But the plaza wasn’t completed until 1964.

“When they were building Lake Anne, they made that lake wall, but when the architects came down from New York, they saw the wall wasn’t straight,” said Cheryl Terio-Simon, wife of Reston founder Robert Simon. “Rather than tear down and rebuild a perfectly good wall, they decided to put up that, what I like to call a pulpit.”

THE LATEST PROGRAM hosted by the Reston Historic Trust covered the subject of Reston’s early architecture, and was filled with tidbits such as that. In addition to Lake Anne, the program examined some of the first developments in Reston. 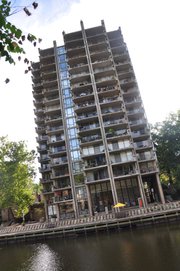 The Heron House, an apartment building at Lake Anne, is one of the examples of Reston’s architecture, discussed by the Reston Historic Trust Thursday, May 23.

“I think of Lake Anne as a modern European village,” TerioSimon said. “The architects were familiar with Simon’s European inspirations, they also understood his taste in whimsy and fun in artistic elements.”

Richard Speier, who lives in Hickory Cluster, is well aware of some of Reston’s idiosyncrasies.

“Sometimes it’s hard to find replacements that fit. It’s like if you break a handle off of an antique Queen Anne dresser. You just can’t go to Home Depot and get a replacement,” he said. “I have large screens in my house, each one is eight by seven feet. Well, I’ve been told by a lot of people, ‘we don‘t have screens in that size.’ One day I came home and there was a truck driving through with screens in the back, and I called their number, and that’s how I was able to replace the screens on our house. You have to be patient to keep these houses going.”

Some of the differences in Reston’s design were groundbreaking. Hickory Cluster was the first development in Reston, designed by architect Charles Goodman. Goodman’s early designs were already changing the way developments were planned.

“A signature of Charles Goodman was the way he used the land,” said Ralph Youngren, who was a practicing architect for more than 50 years. “In the Hollin Hills neighborhood [in Alexandria], every house has it’s own yard, and the houses are oriented to take advantage of the landscape, but still separate, detached houses. There’s no center of the neighborhood, but it takes advantage of a landscape that wasn’t used in many previous developments.”

Once Goodman crossed paths with Simon, another breakthrough occurred, one that would be crucial to Reston’s philosophy.

Richard Speier, a resident of Hickory Cluster, shows a photo of Portofino, Italy, which is what the architecture of Lake Anne Plaza is based on. Speier spoke at the Reston Community Center Lake Anne Thursday, May 23.

“When Goodman and Simon got together, instead of every house having its own yard, Bob Simon decreed that there would be townhouses in the middle of a forest. Whoever heard of that?” he said. “By saving the space, it freed up a huge common area to make a wonderful environment. Much different than Hollin Hills. Each house also has two orientations. One to the neighborhood, and one to the forest. Depending on what you wanted to look at, you had your choice.”

Barbara Naef lives in Golf Course Island. She recalled a visit in 1970 from Louis Sauer, the architect who designed the cluster.

“There were connections between houses, but there was also separation, so you had neighbors, but also privacy, an amazing amount of privacy for townhouses that were so close together,” she said. “When you approach Golf Course Island from Wiehle, I have always thought it looks like a medieval village without the castle or church.”

FOR THE SIMONS, who live in Heron House, the large apartment building at Lake Anne, the plaza’s architecture is a place that always warrants a closer look.

“There are so many details around the plaza, both architecturally and graphically, in and surrounding the Lake Anne area,” Terio-Simon said. “I would encourage anybody to go out and discover them for themselves. They’re wonderful.”