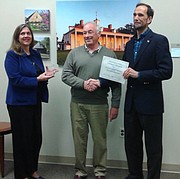 “We pay for the small intangibles,” Fitzsimmons said in a 2015 interview. “The contribution is typically a quick action on our part to fulfill a commitment that enables a needy child to realize a dream, goal or benefit,” Fitzsimmons said.

With regards to being named Community Champion, Fitzsimmons said, “I am honored to be recognized,” in an email. “There are so many amazing community activists in Mount Vernon, I am humbled that Supervisor Storck selected me.”