Owner searches for a new location. 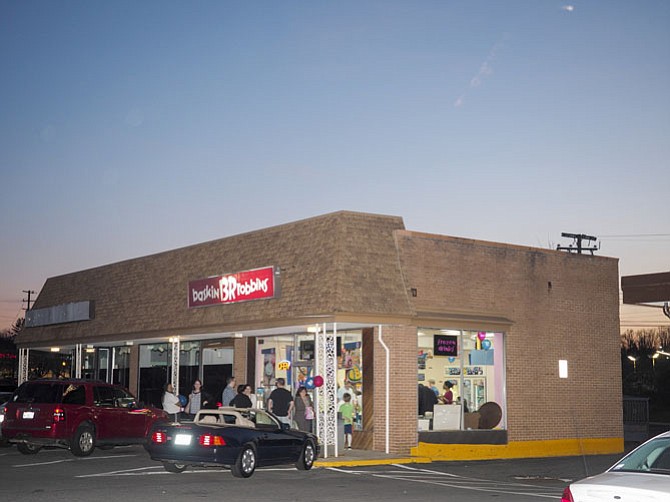 Baskin Robbins the night of the farewell party. Photos by Reem Nadeem/The Connection

Former owner Jeff Stahle and current owner Syed Ahmed pose in the emptied out store, where they both once made livelihoods and memories.

Stahle and Ahmed flip through a scrapbook filled with old photos taken in the store. The scrapbook was also on display during the party, for family and friends to reminisce.

Built in 1962, Baskin Robbins off of Fairfax Boulevard has served the final scoops in its historic location. Current owner Syed Ahmed is being forced to close the store because of eminent domain.

Ahmed, who purchased the store from Jeff Stahle in 2001, is still searching for another location to reopen. However, letting go of the memories that have accumulated in such a historic spot is proving to be difficult.

"We have many memories left here, since like 2001. We used to have 31 scoop night, thousands of people coming, line would go all the way to the parking lot. Many people came from 50 years old and came with their grandchildren and then told me, 'I came here when I was a kid, now I'm bringing my grandchildren,' so I'm proud of it, you know it's like part of me," Ahmed said.

Father to two daughters and two sons, Ahmed will have to miss on the most profitable season for ice cream and is still awaiting government compensation.

"If you were going to close an ice cream store, you'd never close April 1 so it's certainly not something he wanted to do," Stahle said.

Not only will the store be closing just in time for summer business, but Ahmed said he won't have time to recover from the lack of winter business.

"At this time, I'm closing my business. Winter time, I lost money, every month, like $5-6000, I paid from my pocket. And this is the time I'm making money, they shut it down. I don't think they're going to tear down another 6 months, this building. At least they could give us [time] to run the business, I could make some money to feed my family," Ahmed said.

The search for a new location - one that is appropriately sized and is not surrounded by other ice cream stores - is also proving to be more difficult than anticipated. According to Stahle, this location, off of Fairfax Boulevard, benefitted from great visibility and convenient parking.

"It's convenient to pull in, get something, get right back where you're going. And you can get out both ways with the traffic lights, stuff like that. So that's sort of going to be the biggest issue," Stahle said.

The project which has caused Baskin Robbins and surrounding stores to close or relocate, aims to widen the road, as well as control persistent flooding in the area. Both Stahle and Ahmed dealt with flooding in their times as store owners, though they said it was never dangerous or damaging to the store.

Stahle said, "I think there's a lot of things going on, I mean they are widening the two roads. So it makes sense that when you're doing all that, that you should probably do this - we're not crazy people, we understand that you can't leave things to deal with, like flooding. But it's unfortunate."