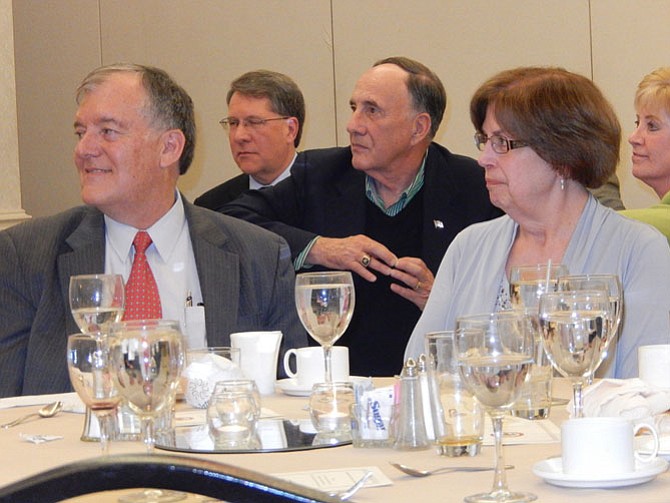 John Litzenberger and wife Barbara listen to the speakers. Behind them are former Sully District Planning Commissioner Ron Koch (center) and his wife Lois. Photo by Bonnie Hobbs.

After Michael Frey retired as Sully District supervisor, Kathy Smith succeeded him and made her own appointments to various Fairfax County boards and commissions. So after serving eight years as Sully’s planning commissioner, John Litzenberger was replaced by Karen Keys-Gamarra.

But all his involvement in the community for decades has not gone unnoticed. And Sunday evening, April 10, he was honored by his peers and colleagues at a special, appreciation dinner hosted by the county Planning Commission at The Waterford in Fair Oaks.

“I’ve known John for almost 40 years,” said Frey. “When I first met him, I was watching the NCAA [basketball] Tournament on a little, black-and-white TV in the Massey Building. He joined me and, right then, I knew we were going to get along.”

Litzenberger has a bachelor’s degree in biochemistry from Syracuse University and a master’s degree in systems management from USC. He served 30 years in the Air Force and the Air National Guard and was a pilot in Vietnam before retiring as a colonel.

A husband, father and grandfather, the Virginia Run resident also served his community. He co-founded the West Fairfax County Citizens Association (WFCCA) and chaired its Land-Use Committee's education committee for 11 years. And he’s coached CYA and SYA sports, plus lacrosse at both Centreville and Westfield high schools.

Litzenberger also helped out during the 1982 Occoquan Downzoning in which the Board of Supervisors rezoned more than 41,000 acres in the Occoquan Watershed to protect the water quality of the Occoquan Reservoir — the source of the county’s drinking water. This land was rezoned to one home per five acres, while parts of Centreville were zoned for higher density.

“The board initiated the Centreville Core Study to examine the downzoning, and John headed the study,” said Frey. “And he had to explain to the Centreville citizens that higher-density townhouses and apartments would be in Centreville. But John was willing to do what it took and was part of all the land-use deliberations.”

“The reason I put him on the Planning Commission is because John’s a people person who could deal with people, one on one,” continued Frey. “He’s someone who’s willing to invest the time and make people understand the land-use process. And even if they don’t like the ultimate decision, at least they’ll know how we got there.”

Frey said being a planning commissioner is “tough, and it takes a lot of patience. But John enjoyed the interaction and bringing together the landowners, developers and residents. And before then, he was a Housing Authority member.” Over the years, said Frey, “We’ve built a beautiful community and a wonderful district. John’s been a huge part of the Sully community, and I know he’ll continue to be involved.”

“It’s a wonderful legacy he’s established, and it’s my honor and pleasure to have had him as a planning commissioner and as a dear friend for 40 years,” said Frey. “John, you left your mark on the community, made it a wonderful place to live and you have a lot to be proud of.”

Former Dranesville District Planning Commissioner Jay Donohue also noted the qualities necessary to be a good planning commissioner. “It takes a great deal of congeniality to bring people from different sides together, plus a sense of humor,” he said. “John also brings optimism and confidence, but under an umbrella of humility that makes people want to work with him. He says what he thinks and has an authenticity about him and a willingness to share.”

He said that, in October 1980, former Sully District Planning Commissioner Ron Koch invited him to get involved in a land-use case, and “That was the beginning of the WFCCA.” Litzenberger served as WFCCA president from 1986-88 and was a longtime member of its land-use committee.

Sunday night, he thanked his family members for their support, as well as his friends in both CYA and SYA. “I also want to thank county staff for all their dedication and long hours of work, the Planning Commission members, the attorneys we work with, and my old friend Mike Frey,” said Litzenberger. “It’s been an honor to serve on the Fairfax County Planning Commission.”

Afterward, he said, “I was really pleased to be honored. And on May 17, Kathy Smith is going to give me and [longtime Sully District Park Authority representative] Hal Strickland an award for our many years of service to the county.”