Best of Reston, Best of Inspiration

Bob Simon’s Reston honored at Silver Anniversary of Cornerstones partnership with the Reston Chamber of Commerce. 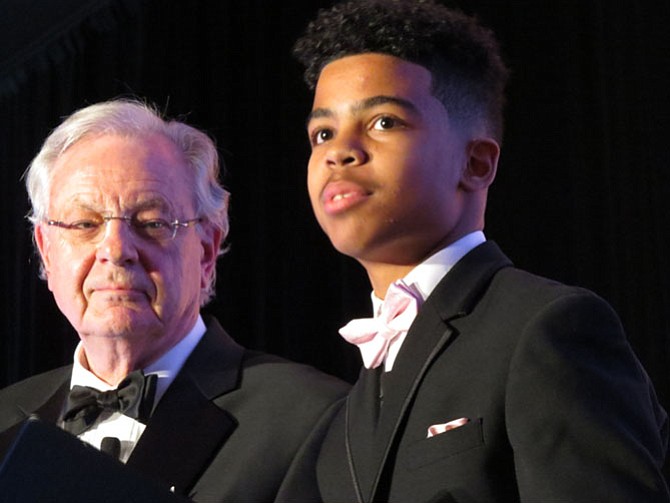 Phil Tobey, a 2001 Best of Reston Honoree, and Langston Hughes Middle School student Joseph Dagbe were the Master of Ceremonies for the 2016 Best of Reston: Awards for Community Service. Joseph is a graduate of the Laurel Learning Center. Photo by Ken Moore.

Ellen Graves, president of Reston Association, and Judy L. Redpath. “From its inception, Reston has been a great place to live, work and play and serve, and tonight’s event is an extraordinary reminder of how our community lives the vision that Bob Simon set forth in 1964,” said Graves.

Friends of Reston for Community Projects earned a Civic-Community Organization Award for raising more than $1.5 million for the funding of Nature House, a year-round environmental education building at the Walker Nature Center.

Olivia Wolfe, Hannah Becker and Kacey Hirschfeld ensured that their childhood friend Amy Boyle was honored with them Thursday night at the Hyatt Regency Reston ballroom.

As elementary students, Wolfe, Becker and Hirschfeld organized a Relay for Life team to support the American Cancer Society. With help from the Core Foundation, they later formed the Reston Youth Triathlon, now the largest youth triathlon in Virginia.

“You never know how one friendship can change who you will become,” Wolfe told the sold-out ballroom with more than 700 in attendance.

When the three went on to respective colleges, they established a race leadership team that encourages South Lakes students to get involved with Amy’s Amigos and organizing the triathlon for youth.

The three amigas were given the Vade Bolton-Ann Rodriguez Legacy award, named in memory of the two past Best of Reston honorees who played pivotal roles at Cornerstones and the Greater Reston Chamber.

“There was not one person in grade school who wasn’t friends with Amy,” said Wolfe. “Amy, we don’t know how we can truly express how much you mean to us.”

CORNERSTONES AND the Greater Reston Chamber of Commerce presented the Silver Anniversary of the Best of Reston Community Services Awards.

The event raised $483,258 for Cornerstones, which helps form “strategies of starting individuals on a pathway to sustainable living-wage employment, and to identify and address other barriers to move from surviving to living prosperous, healthy lives.”

“I am passionate about the work of Cornerstones,” said CEO Kerrie Wilson.

“Even tonight, it’s hard,” she said. “One in four seniors and one in four children are hungry on a regular basis and that boggles the mind.”

She referenced one parent who rode a skateboard to work to be able to support her family. That’s when Wiygul Automotive Clinic got involved; the family business provides an average of $1,000 in parts and labor to fix a car for any client that Cornerstones refers.

“This program started with a simple handshake,” according to Cornerstones.

Bill Wiygul and his sons were honored Thursday night with the Small Business Leader award. ”I see what is going on tonight, and I tell you, it’s infectious,” said Bill Wiygul.

He announced a partnership with two other local auto parts stores, who will chip in $40,000 to help other families in need with car repair.

“I hate to see a single mother with kids get fired because she can’t get to work,” Bill Wiygul said.

“We need to think differently because there is too much to do,” said Wilson, who acknowledged the work of Bob Simon, Priscilla Ames and Embry Rucker.

“The blueprints are in our hands. Bob left it for us. It’s up to us what we do with them,” she said.

“We stand on the shoulders of Bob Simon and those who lay the pathway before us,” said Mark Ingrao, president and CEO of the Greater Reston Chamber of Commerce. “We are honored by the generosity of this community. We are a chamber built on a social conscience.”

Bob Simon was videotaped talking about the annual event.

“It’s nice to have this ballroom filled with people who have a special feeling of community, and not only have that special feeling, but do something about it,” Simon said in the video.

Simon was honored during the evening as he was all week surrounding Founder’s Day.

“We are honored by the generosity of this community,” said Greater Reston Chamber of Commerce CEO Mark Ingrao. More than $483,000 was raised for Cornerstones programs.

“I’ve been to 24 of these including the first one,” said Del. Ken Plum. “It’s so great to feel the energy in this room. What a great community we have in Reston. We need to celebrate that, too.”

“When we honor these people tonight, let’s remember the spirit of Bob Simon that made this such a special place,” said U.S. Rep. Gerry Connolly. “I can’t come to Reston and not think about him and miss him. He was always around.”

“Bob was a remarkable man. Prophets in our midst aren’t appreciated, but Reston certainly appreciated Bob,” he said.

“NAMASTE,” said Maryam Ovissi, who moved to Reston when she was in middle school. “Receive my gratitude that I send to each of you.”

The YMCA of Reston gave Ovissi her first opportunity to teach yoga. She is now the owner of Beloved Yoga with locations in Reston and Great Falls.

She now provides free classes to the Reston community, including clients at the Embry Rucker Community Shelter and other Cornerstones clients, Southgate Community Center and the Herndon Resource Center.

“One of the most well-known, involved and effective people in Reston for the past three decades, her myriad contributions go well beyond the scope of her day job as executive director of the Reston Community Center, which provides the stage for ongoing community building,” according to Cornerstones documents.

“Reston is the most creative compassionate and connecting place,” Gordon said, after receiving a standing ovation by many in the audience.“I hope all of us remember why Reston is our home. Be a part of building community in Reston.”

Jim Elder also received an Individual Community Leader award for teaching children that playing fair is more important than winning. Since moving to Reston in 1980, Elder has been involved in Reston’s youth baseball, tennis and basketball programs.

“I never want to live anywhere else. I feel like the community was made for me,” he said.

Friends of Reston for Community Projects was honored with a Civic/Community Organization Award.

Friends raised more than $1.5 million for the funding of Nature House, a year-round, environmental education building at the Walker Nature Center.

“May all the honorees I stand with tonight be an inspiration to all of us, especially all the young people. May we inspire you to live a life of service first and foremost,” she said.