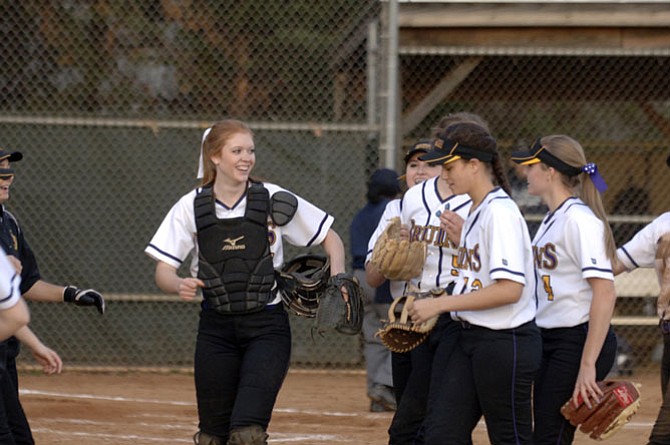 The Lake Braddock softball team, seen earlier this season, improved to 10-0 with a win over T.C. Williams on Tuesday. Photo by Craig Sterbutzel. 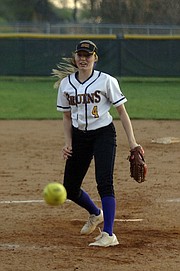 The Bruins were able to get the scoring started in the first inning on an RBI single by senior catcher Caroline Jones. Lake Braddock doubled its lead in the second inning off a home run from senior first baseman Ciara Johnson.

T.C. was unable to recover from the early runs allowed, and would ultimately fall in five innings.

“I’ve been working on being more aggressive lately, and I just hit the pitch and it was right down the middle,” Johnson said. “[Games like these] help us to watch the ball. It makes sure we are making the basic plays.”

TC was unable to muster any offense against Lake Braddock senior pitcher Abby Thibodeau. With just two base runners allowed, Thibodeau was able to power the Bruins to another win. Since coming over from Paul VI, the Syracuse commit has fit right in as part of a line of great pitchers.

“She’s been real important,” Lake Braddock head coach George Rumore said. “She’s a big plus for us. We had Amanda Hendrix last year, Ashley Flesch the year before that. This is a team that over the last six years has, like, 120 wins and, like, 10 losses and most of those are playoffs.”

“We needed our defense,” T.C. Williams head coach Jen Ushe said. “We knew [Thibodeau] was going to be a tough pitcher, so we wanted to keep them to as few runs as possible. Unfortunately, we made some errors, but that was our goal this week.”