In the pipeline for Great Falls … 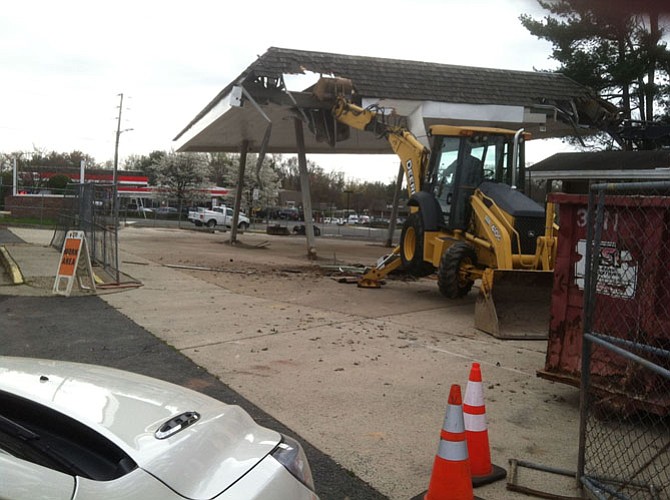 Idyllic but controversial. More than 1,400 residents oppose a proposal to develop Brooks Farm off Springvale Road into 20 cluster houses.

The Planning Commission is scheduled to reconvene on May 18 to make its decision and recommendation to the Board of Supervisors on the application.

The Gulick Group submitted a pending application to rezone 10500 Leesburg Pike (portion of the Hills Nursery) to 10 lots on 11 acres that have been zoned R-A since 1991. The property is located in an area east of Springvale Road and at the terminus of Challedon Road. The property is surrounded by the Lexington Estates and contains a significant environmentally sensitive area.

NOW: TD Bank hopes to begin construction on the new bank approved for the site in the fall. The opening is currently planned for February 2017.

TD Bank razed and cleared remnants of the former gas station at the corner of Georgetown Pike and Walker Road last month, even though construction on the bank isn’t scheduled until August.

“I’m extremely grateful to them,” said Supervisor John Foust. “The site’s been cleared. It’s a significant aesthetic improvement. It’s still not what I call attractive, but it’s so much better than it was.”

TD Bank is planned to open at 9901 Georgetown Pike in February 2017. The 2,616 square-foot bank with two drive-thru lanes will replace the 1,781 square-foot service station.

The Board of Supervisors approved TD Bank’s special exception (SE 2013-DR-001) on Feb. 25, 2014. The Planning Commission recommended its approval on the 27,426 square feet of property the month before, according to county documents.

Leaks were detected from the vapor recovery units at former gas station in 2009. MTBE was the gasoline additive used under direction of the EPA prior to 2006, and a leak released the chemical from the former Exxon Service station into groundwater.

“The old Exxon station site has been the focus of groundwater contamination clean-up efforts for the past few years. Those efforts will continue at this site, as well as across Walker Road underneath the shopping center parking lot to which the contamination has spread,” according to GFCA documents.

Next to the Great Falls Grange

This link shows where it is

Betty Nalls Swartz rolls the windows down when she drives along Old Georgetown Pike by the Grange, Old Schoolhouse and Lift Me Up therapeutic riding program. Marmota Farm, 22.78 acres and once a dairy farm, “still smells like a farm,” she said.

Great Falls Citizens Association held a Town meeting Tuesday, Feb. 9, to address attempts by Save Marmota Farm. SMF is a group that formed to investigate a proposal that the farm be purchased with funds from a 2016 Park Bond referendum that will be voted on this November election.

The Souhail El-Farouki Trust purchased the land in 1991; Stephen Moriarty of Chadwick Washington is the trustee for the family.

“Somebody sooner or later is going to pick this up. If anybody wants to keep it open space, that’s fine with [the owners]. If any of you have a check for $16 million, the property is yours,” said Moriarty.

“I”m a little short right now,” said Robb Watters, president of the HOA for the adjacent homes, in February.

Although Watters believes developing the land will be difficult due to economics and storm water regulations, he and his neighbors are not opposed to new homes on the property. They are concerned about possible high-volume, active park uses, and are concerned about not having control on what ends up by their properties.

Moriarty said negotiations with a specific developer have been ongoing for a possible 11-house subdivision with entrance from Georgetown Pike that would be allowed by right, has preliminary approval from the county, according to Save Marmota Farm documents.

“A lot of us in Great Falls have interest in this property,” said Jack Nutter, Great Falls historian and member of Save Marmota Farm. “There is no substitute for its natural beauty.”

Bruce Winston of Fraser Forbes of McLean lists the property for sale at $16.5 million. Fairfax County’s assessment is $3.48 million based on its present use, according to Save Marmota Farm documents.

“No previous board experience is needed, just an interest in serving Great Falls,” according to GFCA documents.

Board members and directors help influence how the association addresses concerns such as development, traffic, zoning, retail, schools, parks and the environment.

Candidates must be GFCA members and attend the Town Hall meeting on May 10, 7:30 p.m. GFCA elections will be held June 14, 7:30 p.m. Contact Ed Phillips, nominations chair, at Nominations@gfca.org.

The construction at Langley High School will completely modernize the McLean/Great Falls school that was originally built in the 1960s. Fairfax County voters approved the $68 million project in a 2013 bond referendum.

Representatives from a dozen or so Great Falls organizations, coordinated by Jorge Adeler, have met since October to plan making the Great Falls Grange the centerpiece of the community, as founding Great Falls farmers envisioned almost a century ago.

“The potential is extraordinary,” said Adeler. “The possible activities for community use, for youth, senior citizens, adults, artists, musicians, nonprofits and the entire community are endless.”

Last March, the community celebrated renovations to the 1929 Great Falls Grange Hall building that made it accessible to all.

“For far too long, it was not accessible to our residents with disabilities and to our senior citizens,” said Supervisor John Foust, who helped secure $350,000 for the $503,000 project from County carry-over funds in 2013. The Fairfax County Park Authority funded the balance.

“If the community groups come together the way I think they might and the way it was initially proposed, I see something more grand here.”

Great Falls Citizens Association wants to save the house on Turner Farm through the residential curatorship program. Turner Farm was saved from development by a public private partnership started in 1994 to "Save the Farm."

Turner Farm was saved from development by a public private partnership started in 1994 to "Save the Farm." Great Falls Citizens Association hopes for the Turner Farmhouse to be selected for the county’s Residential Curator Program.

Turner Farm is one of four properties that could be offered an “Invitation for Expressions of Interest,” in order to determine the level of interest and potential hurdles to overcome for the next properties to be considered for advertisement for possible curatorship. The Resident Curator Project Team was scheduled to meet on Monday, April 25, 2016.

The Fairfax County Board of Supervisors approved an ordinance that permits a Residential Curator Program for unused, publicly-owned historic properties to be leased to individuals or groups for little or no rent. This can provide the opportunity to preserve historic properties at a minimum cost to taxpayers and can put the property to practical use as residential, office or commercial space. Curators would be required to rehabilitate and maintain the properties at their own expense.

Walker Road Bridge was constructed in 1932, is 19 feet in length and 22 feet wide. It can accommodate alternating one-way traffic.

The new bridge will consist of a 50-foot-long single-span structure with a total width of 40 feet and will accommodate constant two-way traffic without the use of existing yield signs. The new bridge will include an attached 6-foot sidewalk on the west side of the road to accommodate future trails planned by the county.

Construction, at the same location as the existing bridge, is scheduled to begin and end in the summer of 2018, according to VDOT.

In June 2015, The Board of Supervisors approved Trinity Land’s application for a special exception to build 30 single family units using a cluster development configuration on the 28.9 acre property formerly known as Woody's Golf range. The site is zoned R-1 (one dwelling unit per acre) and is located in the Dranesville Tavern Historic Overlay District.