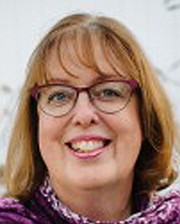 Harris started bargain hunting in second grade at her best friend’s yard sale. She honed her bartering skills, as well as her writing skills, as she moved around the country, while her husband served in the Air Force. The first book in the series, “Tagged for Death,” which debuted in December 2014, was a Mystery Guild selection and garnered Harris a nomination for an Agatha Award for Best First Novel. The second book, “The Longest Yard Sale,” was published in June 2015.

The series is about Sarah Winston, a former military spouse living in the fictional town of Ellington, Mass., pursuing her hobby, turned career, of haunting garage and tag sales in search of lucrative bargains. Sarah’s ex-husband is now Ellington’s Chief of Police, leading to conflicts, as she is drawn to amateur investigations, in order to aid those closest to her. Her queries lead readers into the search for the truth among the town’s residents, as well as those of the neighboring Fitch Air Force Base. Harris brings a unique insight into the lives of military family members and seamlessly weaves those details into her novels.

In the latest book, “All Murders Final!” Sarah tries to build her business by starting a virtual garage sale but she never bargained on dealing with frightening threats. Then when a client is murdered, she is again pulled into the intrigue of finding out who committed the crime. RT Book Reviews says: “Well written and executed, this is a definite winner. Bargain hunting has never been so much fun!”

In addition to being president of the Sisters in Crime, Chesapeake Chapter, Harris blogs with a group of fellow mystery writers at WickedCozyAuthors.com. She enjoys meeting fellow mystery fans, as she makes appearances to publicize her books, as well as encouraging aspiring writers by sharing her success story and advising: “Don’t give up and work hard at your craft.”