If Hillary Clinton is elected, the economy will grow by 10.4 million jobs nationwide while under a Trump administration, the economy would lose 3.4 million jobs. This was the finding of a recent report by Moody’s Investors Service economist Mark Zandi.

On Aug. 8, outside the Court House Metro entrance, U.S. Rep. Don Beyer (D-8), state Del. Charniele Herring, and economist Jared Bernstein used the study as the centerpiece for a press conference about how a Clinton administration would grow jobs and see more investment in local infrastructure. But others, like Beyer’s Republican opponent for the 8th District seat, say there’s more to the economic impacts of the Clinton plan than the study and press conference would make it seem.

For Virginia, the Clinton supporters said the Zandi projection would mean 271,000 new jobs in Virginia.

“There are two visions of the economy here,” said Bernstein, former chief economic advisor to Vice President Joe Biden. “One is Hillary Clinton’s, which is inclusive and benefits the middle class and lower income people across the income scale … the other is Trump’s pre-Obama economy … which exacerbates income inequality.” 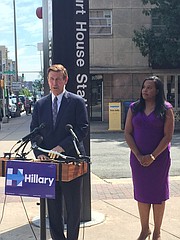 For Beyer, the biggest appeal of the Clinton plan is the added infrastructure improvements. In particular, Beyer said Clinton’s plans for new infrastructure in the region would include extensive repairs for the Arlington Memorial Bridge and long-term repairs for the Metro. Beyer said that the Metro system needs better maintenance of their jumper cables, the source of many fires on Metro lines over the last year.

“This is putting us on the path to a stronger future,” said Beyer. “This is about improving the quality of life in the region.”

Both Beyer and Herring argued that better transportation infrastructure in D.C. will create a better work environment and better jobs for Northern Virginia. Herring also made a link between infrastructure maintenance and job creation.

“It is frustrating for constituents to not know how they will get to work,” said Herring. “Infrastructure is job creation. Transportation is key to our economy.”

Beyer also took a moment to attack Trump’s business history and his claims that bankruptcies and unpaid labor was just part of doing business.

“I’ve been a businessman for four decades,” said Beyer, who owns Beyer Volvo, “That’s not what we do.”

The Trump camp rejected the validity of the analysis. A statement on the Trump campaign website questions the credibility of Zandi’s previous reports favoring the 2008 stimulus plan.

Bernstein noted that there was a margin of error for predictive models, but said in general Zandi’s projections for economic recovery were very close.

“[Zandi] ran these plans through traditional models,” said Bernstein. “Anyone doing that would have gotten the same results. When you’re looking at mass deportation, you’re slashing revenues.”

Like many Americans, Charles Hernick finds himself unable to fully support either plan. Hernick is running as a Republican against Beyer in the 8th congressional district and says he doesn’t fully support either Clinton or Trump’s plans, though he sees benefits and downsides in each.

“I have a lot of concerns with the Clinton plan ... I’m concerned about Trump’s tax plan too,” said Hernick. “[Clinton’s] your classic tax and spend plan. There are a couple of issues with that. Northern Virginia is relatively well off compared to the rest of the country. A lot of those tax receipts come from Northern Virginia for the types of stimulus spending … But that type of stimulus spending only works when the construction sector is in a bad way, which has largely recovered.”

Hernick said the way to stimulate the economy was cutting taxes for small businesses and helping businesses compete on international markets. Hernick suggested that the United States lower its corporate tax rates to meet those in Europe to help make their businesses competitive and encourage more multinational corporations to move to Northern Virginia. But here Hernick also disagreed with Trump’s plan. While Trump’s plan includes a 15 percent corporate tax cut, Hernick says he wouldn’t cut it by more than 10 percent.

“We can’t just run on deficit spending,” said Hernick. “He doesn’t talk about where our spending cut would be, so a 15 percent cut is too far. Folks I talk to in the business community just want to be able to compete with European businesses. That’s a critical issue … If able to cut corporate tax rate, we will see a pretty quick reinvestment and growth in the economy. Also need to look at new markets and additional tax revenues. I’m OK with regulating marijuana like alcohol such that it can be sold and taxed. We have to think outside the box and be flexible here. That’s an area where I agree with Don [Beyer].”

But while Hernick and Beyer both agree that fixing the Metro needs to be a regional priority, Hernick was skeptical of the benefit Clinton’s infrastructure plan would have on regional job creation. For Hernick, one possible solution would involve bringing on business partners to privatize portions of the rail lines.

“Infrastructure is a critical need in Northern Virginia and there’s some weak points, particularly the Metro,” said Hernick. “To the extent that we need to spend more money on infrastructure, I’m OK with that, but I think they’re overestimating the stimulative effect of that … There’s a role there for tax dollars there, but as a stimulus plan that’s a joke.”