Centreville/Chantilly: Building Trust in the Community

Residents, police and firefighters join together during National Night Out. 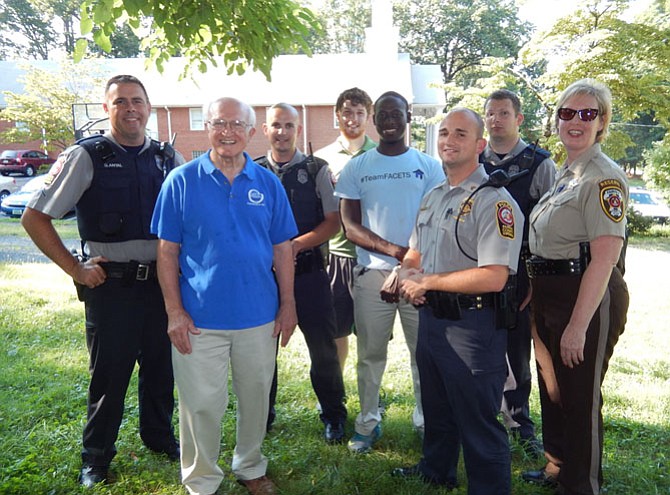 Church, FACETS and law-enforcement personnel gather for a photo in Ragan Oaks. Photo by Bonnie Hobbs.

Hot dogs, ice cream, water games, laughter and fun were all part of last week’s annual National Night Out celebration in the local area. It was held Tuesday evening, Aug. 2, and enabled community residents and public-safety personnel to meet each other, mingle and share some time together in a happy and relaxed atmosphere.

Several neighborhoods held a variety of events, including cookouts, pool parties and ice-cream socials. There, residents got to discuss any concerns they had, as well as receive safety tips, from the police officers and firefighters who regularly serve their communities.

In the Ragan Oaks neighborhood in Fair Oaks, hot dogs, raw vegetables, cupcakes, watermelon and strawberries with whipped cream were on the menu. FACETS and nearby Centerpointe Church sponsored the festivities, and the food was served on picnic tables under the trees.

“We want to be a church that’s not just in the community, but with the community,” said the Rev. Brandon Horst, the church’s pastor. “So we partner with FACETS on several events; and this is a good one because it builds trust, instead of suspicion, between the police and the community.” 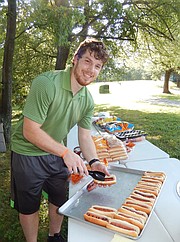 “My brother’s a state trooper in Maryland, and he said he feels like he has a target on his back,” continued Horst. “But he also said some people have gone out of their way to show support. Still, when he’s in crowds, he’s always on edge.”

That’s why National Night Out is so important, said Horst. “It’s easy to hate people you don’t know,” he said. “But when you know [law-enforcement personnel] and know they have families they love, it’s a good antidote to hate.”

Agreeing, Tijani Musa, a community development advocate with FACETS, said anything that brings the police and residents together for a common purpose is a good thing. And both Fair Oaks police officers and a sheriff’s deputy were at the Ragan Oaks event.

He said it’s also good for children to know who’s out there protecting them, “National Night Out builds good relationships; that’s why we have these events every year,” said Musa. “The kids get to ask the offices about safety, and the officers can describe a good interaction with the police.”

Representing the Fairfax County Sheriff’s Office at Ragan Oaks was Reserve Deputy Kelly Gulich. “I find it rewarding because the kids are happy to see us,” she said. “Oftentimes, something scary may be going on in their lives, and this gives them a chance to get to know a police officer or deputy and know that they’re people, too. And it’s always good to see a smiling face.”

Police Sgt. Trevor Steranko said these events get the police in touch with the community. “We’re normally in our cars all day, driving from call to call, usually dealing with people having problems, so it’s not a good day for them,” he said. “But National Night Out gets us out and interacting with people, without them actually needing us. It’s friendlier and gives them face time with us.”

The Sully Station II Community Center was chocked full of people enjoying themselves, both inside the building and outdoors. Nearly 450 people attended, throughout the evening, chowing down on sandwiches from Firehouse Subs, cotton candy, popcorn, Sno Cones, and ice cream. Children jumped inside a Blue’s Clues moonbounce and played games on the lawn, while a deejay played hit songs. Neighbors chatted with each other and with Sully District police and firefighters from West Centreville’s Station 38.

Vanessa Quintanilla was there with her family. “My daughter wanted to come,” she said. “It’s a good thing to bring everyone together, and you get to meet new people.”

“I think it’s wonderful,” said Jeff Chillemi. “You’d be surprised how many residents don’t know each other. This is the biggest turnout I’ve seen here. Police have a thankless job but, without that thin blue line, we’d have mayhem. I don’t know if I could be a policeman; they hear gunshots and run toward the danger to protect us.”

Also appreciative of firefighters, he said, “I slipped on some snow and ice, a few years ago, and knocked myself out, and an ambulance came and helped me. In this community, we bring our police and firefighters food on holidays, but I wish we could do even more to thank them.”

Karen Sica, of the Volunteers in Police Services (VIPS), said it’s “Good for the people and police to see we can all get along together. And at National Night Out, we can also pass along crime-prevention tips.”

Police Officer Matt Schafer said 30-40 Sully District police were attending 16 different events in the district. “With recent [national] events, tensions are high between communities and police,” he said. “But they need to coexist, and this is just a great event to bring everybody together.”

Leslie and Dan Jenuleson, with Sully II’s Neighborhood Watch, have organized their community’s National Night Out since 2001. “It’s important that the police know we support them and we’re here for them,” said Leslie Jenuleson. “It’s a night to recognize partnerships between police and neighborhoods, and a chance to build and maintain relationships with the men and women who keep us safe.”

“Our law-enforcement officers are there when we need them the most, so this is a time to say thank you and let the community be with them during a local gathering,” she continued. “With all the negativity in the nation [toward police], National Night Out is a great way to show our Fairfax County police officers that we’re behind them.”

Norma Koby, whose daughter lives in Sully II, added, “Our police are very valiant; they risk their lives for us. But they get a bad rap, when they should be respected for what they do.”

Meanwhile, firefighter Andrea Maturo lifted children in and out of Station 38’s fire engine so they could explore it and sit behind the wheel and pretend to drive. “Anything that gets the community involved is a good thing,” she said. “It’s always a joy seeing all the kids and families out having fun.”

Centreville’s Gate Post Estates community celebrated with an ice-cream social. Neighbors reconnected with each other, while children decorated their bikes and played in the cul-de-sac with giant bubbles, water squirt-tubes and glow sticks.

Heidi Zenyuh organized it all and about 60 people attended. Calling National Night Out a “great thing,” VIPS member John Werderman said it enables police to “interact with the community, answer people’s questions and bond with the young ones.”

“It helps bring the community together — whether to recognize that they don’t want criminals in their neighborhood or just to be neighborly,” said Sully District Police PFC Brendan Murphy. “And we get to interact on a more personal level when they’re not in crisis or something bad has happened. It’s grassroots, because that’s what we are without our uniforms.”

Although Gate Post Estates has participated in this event for many years, Zenyuh has organized it for at least five years. “I feel very fortunate because it gives us and the kids a chance to talk about any issues in the community,” she said. “It also lets the kids get comfortable with the officers so, if there ever is an issue, they know they can trust the police. We were talking bike safety with them, as well. And it’s a great chance for the neighbors to congregate and get to know each other.”

“Heidi is an awesome organizer, and I’m glad I was able to come this year,” said neighbor Jeannie Kinn. “The kids all had fun, and we always meet new neighbors at these events, too.”

Some 300 people attended the event in Chantilly’s Winding Brook community. The Winding Brook Board of Directors organized it and provided all the food and entertainment. Neighbors enjoyed grilled hot dogs and hamburgers, chips and beverages, swam in the community pool and watched their children zip down a gigantic, inflatable waterslide.

Dropping by to socialize were Sully District police, including bicycle officers, firefighters from Chantilly’s Fire Station 15 and a Virginia state trooper. And the school resource officer from Rocky Run Middle handed out stickers, glow sticks and coloring books to the children.

“The firefighters and police officers have always been so good about coming out here, for the simplest of calls to things more complicated,” said Board Treasurer Dayheem Pourhashemi. “They’ve always been great and so responsive, and this is just a little bit we can give back to them.”

He and Board Secretary Matt Radek manned the grill, cooking up a slew of food. “We sent home our leftovers with the ambulance people from Station 15,” said Bobbie Demoulin, board vice president. “We put on this event to show our respect and appreciation for the officers who serve our community and to thank them for everything they do for us. Whenever we need an extra patrol, they work it in.”

Pleased with how things turned out, Community Manager Sarah Tozer said, “National Night Out really builds community for the homeowners to see their board members serving them. It’s about food and fellowship, and it’s a way for them to understand that we’re all members of this community.”