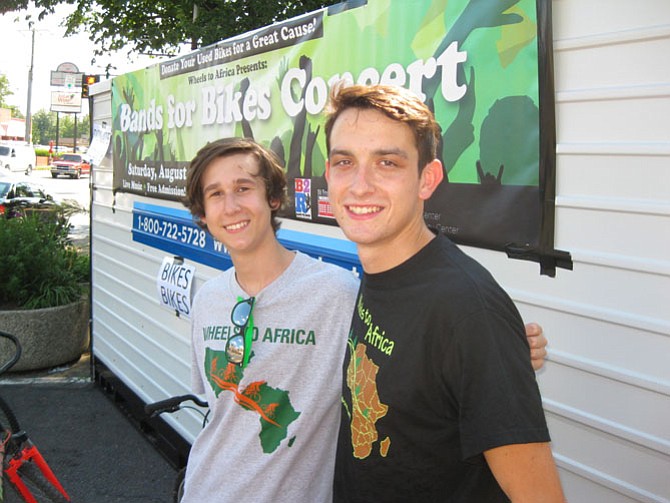 Organizers of the Wheels-to-Africa bike collection and Bands for Bikes rock concert Jack Lichtenstein, 16, of McLean and Winston Duncan, 21, of Arlington. The event was held for the third year on Saturday, Aug. 20 at the Old Firehouse in McLean. Photo by Steve Hibbard. 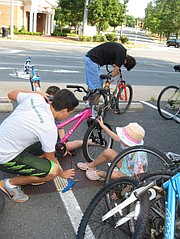 A Wheels-to-Africa bike collection and Bands for Bikes rock concert was held for the third year on Saturday, Aug. 20 in conjunction with the Old Firehouse Teen Center’s Annual Block Party in McLean. It was the brainchild of Jack Lichtenstein, 16, of McLean, who worked with Winston Duncan, 21, of Arlington. For three weeks, Jack organized the four bands and got about 20 volunteers together; and Winston has been doing the bike collection for 10 years. Over the years, he's collected 6,000 bikes that were transported to Africa. On this day, they raised about $200 and collected more than 25 bikes that will be shipped to either Tanzania or Nigeria.

"It's helping a lot of African children with transportation to get medicine and various essentials," said Jack Lichtenstein, a junior at Langley High School. "And I figured I'd use my music background to help the cause." He contacted a variety of bands but said it was difficult rounding up people since the musicians were on vacation during the summer.

"The biggest thing for me is to see all these young people out today helping others and empowering people less fortunate than themselves, and to get their community involved while having a little bit of fun as well," said Winston Duncan, who is a senior international relations major at Bard College.

"The best part of the Wheels to Africa program is seeing the young people in the community organize the event," said Dixie Duncan, mother of Winston. "Jack is learning about community action; he organized this himself, and Wheels to Africa has developed many young leaders, and that to me is exciting. What I love about this project is it gives young leaders an opportunity to learn about their communities and what they need to do to become active -- they learn how tough it is to do community action."

Jack's mother Angela Lichtenstein added: "Jack recruited the four bands to play; he coordinated all of the gear, courtesy of Bach to Rock Music School in McLean. I just provided needed support and helped collect bikes for Wheels to Africa."

The four bands that played include: The Unexpected, Jack's band; Jade Lewis and Brandon Miller; the Jenna and Eliza Project; and CYKA. The McLean High School Dance team also performed for the crowd. For more information, go to www.wheels-to-africa.org.