Bands Rock for Bikes in McLean 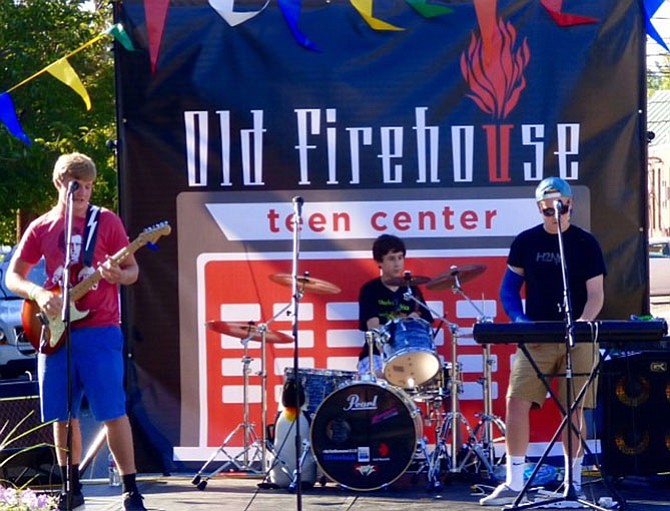 From left: Eric Stein, Jack Lichtenstein and Bryan Bedell of The Unexpected band will be performing at the 4th Annual Bands for Bikes Concert, Saturday, Aug. 19, 2017 in McLean.

The McLean High School Dance Team participated in the last year’s Block Party and Bands for Bikes concert in McLean. This year’s event – collecting used bikes for children in Africa – will be held on Saturday, Aug. 19, 4-8 p.m.

for needy children. The organization was founded in 2005, by a 10-year-old Arlington boy named Winston Duncan, after he visited Africa on a mission trip with his mother. During the visit, Winston was struck by the distances children had to walk for basic needs like food and water. He decided to take action, and, since then, Wheels to Africa has donated more than 5,000 bikes to children in some of the most remote villages of Africa.

After hearing this story, long-time friends Jack Lichtenstein and Morgan Poirier from McLean teamed up to organize their first benefit for Wheels to Africa in 2014. They called it “Bands for Bikes.” These two rising 12th graders are organizing their fourth annual “Bands for Bikes” concert as a fun way for their friends and community to once again support Wheels to Africa. 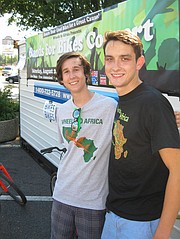 Organizers of the Wheels-to-Africa bike collection and Bands for Bikes rock concert Jack Lichtenstein of McLean and Winston Duncan of Arlington at the last year’s event at the Old Firehouse in McLean.

Lichtenstein and Poirier will be hosting their event in conjunction with the Old Firehouse Teen Center’s Annual Block Party, which will feature food trucks, games and an outdoor stage. The two boys have been hard at work with Lichtenstein recruiting and marketing area musicians and teen bands to play at the event, and Poirier organizing many needed volunteers.

Some of the bands volunteering to perform for this great cause are “The Drop Off,” featuring Kat Cannon, Miranda Fletcher, Lauren Lewis, Sarah Champness and Lichtenstein, and “The Unexpected,” consisting of Eric Stein, Bryan Bedell and Lichtenstein, who are returning to perform for their fourth year. Claudia Swope, who studies at Berklee College of Music in Boston, will also take the stage.

Over the past three years, Lichtenstein and Poirier have collected hundreds of bikes and thousands of dollars in donations for Wheels to Africa. The community has been very supportive of the boys’ efforts. Bach to Rock, the music school where many of the musicians study, is a co-sponsor of the benefit. 1-800-PACK-RAT will provide storage containers for the bikes and is also a co-sponsor. The Old Firehouse Teen Center Annual Block Party and “Bands for Bikes” concert are scheduled to take place at 1440 Chain Bridge Road, McLean on Saturday, Aug. 19, 4-8 p.m. Used bikes can be dropped off at OFTC between 10 a.m.-8 p.m.

All ages are welcome, concert admission is free and a bike donation is not required to join in the fun. Community service is available for teens. For more information, email w2africa@gmail.com.