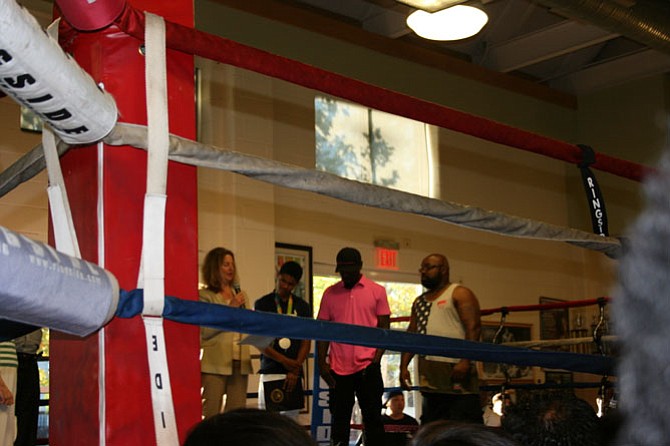 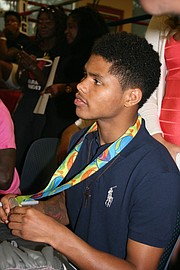 Shakur Stevenson first entered boxing at age 5. Since then he’s earned worldwide recognition including the 2014 Youth Olympic Games Gold Medalist award. His biggest goal outside of boxing is to help his family. 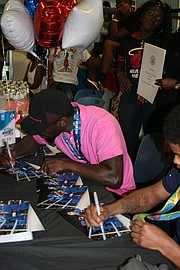 The Alexandria Boxing Club, where Stevenson practices, organized the “Welcome Back” event. “Tonight, we recognize Shakur’s outstanding achievements,” Mayor Allison Silberberg announced in her proclamation while stepping into the ring.

“(There are) lots of stars in this room,” said Antoine Douglas, an athlete who also boxes at the Alexandria Boxing Club. “It takes a team of people to support success.”

Coach Dennis Porter is one. “Coach Dennis is this gym,” said Douglas. He came to Alexandria from D.C. and has been with the Alexandria Boxing Club for more than 20 years, providing training and a safe place for young people to spend their time.

“Our boys have been boxing for one to two years,” said Mike Davis, father of two boys, Simon, 9, and Isaac, 7. “Coach Dennis helps train the boys. It’s a big family.”

Porter had Stevenson running months before the games. “You get what you put in,” he said. Those words resonated with 25-year-old boxer Jean Jacques Rousseau who spars with Stevenson. “There’s no shortcut. It’s hard work.”

Stevenson’s personal coach, Kay Koroma, had Stevenson begin his day at 4 a.m. Koroma enjoyed his own career as a boxer and now dedicates free time to training children, teens and others at the Alexandria Boxing Club.

“Historically, athletes have made inroads for social change. Jesse Owens, Jackie Robinson and Muhammad Ali were men of their time. Recognizing our own champions and role models is a psychological momentum for Alexandria,” said community activist McArthur Myers.

As Silberberg said later by phone, “The lessons in sports teach you the essence of life: discipline, courage, sportsmanship.”