Into the Ring in Alexandria
Votes

Into the Ring in Alexandria 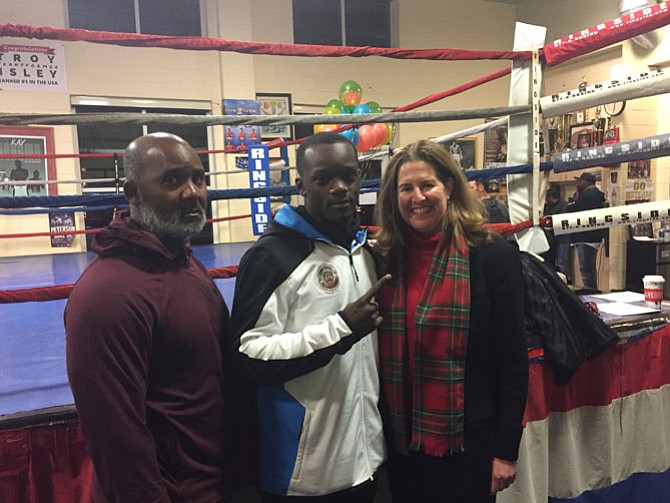 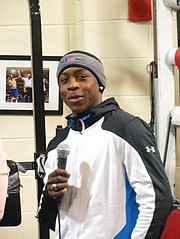 Alexandria boxer Keyshawn Davis, undefeated for over 24 fights this year and winner of the National Golden Gloves.

Javier Martinez throws a punch, and Troy Isley ducks out of the way. Another punch, another dodge. Isley is watching every move, watching every jab and extension, and waits for just the right moment. Then he lashes out with a flurry of blows that sends Martinez into a corner. Once Isley gets started, he doesn’t stop. With speed that can be difficult to follow, he hammers at Martinez, one hit connecting after the other, over and over and driving in until the bell and the round is decided.

Isley, from Alexandria, is the middleweight men’s national champion. At the World Championships in Germany earlier this year, Isley represented the United States and won bronze. It’s a long road for someone who started boxing to avoid being picked on in the neighborhood, but at the Alexandria Boxing Club it’s becoming a familiar story. Isley wasn’t alone in his homecoming as a champion. Three champions from this year’s U.S. Nationals were from the Alexandria Boxing Club. Joining Isley was Amelia Moore, elite champion in the 141 lbs category and Keyshawn Davis, who was undefeated over 24 fights this year and won the National Golden Gloves earlier this year. They were joined by Shakur Stevenson, who won silver at the 2016 Olympics. Stevenson, originally from New Jersey, moved south to train at the Alexandria Boxing Club.

On Dec. 15, the Alexandria Boxing Club and guests from around the city came together at their space in the Charles Houston Recreation Center to welcome the returning national champions back to their home gym.

“I didn’t like it at first,” said Isley. “It was tough. I had to be here every day. But then I got into the ring … it was nerve wracking, but then it all goes away.”

Isley said boxing helped him learn to control his anger. Isley would get into fights as a child every day, pushed around by other local kids, but once he started boxing he said he never got into a fight again. Isley’s father, Kevin Johnson, boxed when he was younger. His basement was full of work out equipment and old boxing supplies he says Isley started training with at a young age to defend himself.

Johnson remembered the early days of taking Isley to the boxing club, where Coach Kay Koroma put him in a ring with other youths and Isley beat every other fighter. Johnson said that Koroma told him then if Isley kept coming to the gym, he could become a world champion.

“I knew he could do it,” said Johnson. “My wife was hesitant, she was worried about the physical aspect, but he was a natural. I’m very proud of him. I knew he had it in him, but to see him put in the work and reap the rewards … sometimes it’s hard to wrap my head around it.”

Isley, 19 now, spends most of his time in Colorado training as part of Team USA.

The day of the celebration found out that he had just been accepted to DeVry University to study business.

Isley said kids who are interested in boxing should try it out first and see how practice lives up to their expectation. Too often, Isley says his friends come in and want to jump in the ring, but Isley says the first step is spending a long time standing in front of a mirror learning to jab.

Last year, Moore placed second at the U.S. Nationals. She took the loss hard, and vowed to make 2017 a comeback year.

“I was upset, “ said Moore. “It was a growing experience. I was tired. I would wake up every morning feeling … that I lost to myself. It hits really hard. I let it slip through my fingers. Coming out of it, I decided to go for everything this year.”

Throughout 2017, Moore won several national tournaments, including the National Golden Gloves, Ringside Championships, and the National Police Athletic League Championships and taking the title at the Nationals. The frequent travel left her frequently sick and occasionally broke. She said she was often hungry, tired and frustrated. But worst of all, there’s a feeling of complete isolation in travelling from tournament to tournament. Two months ago, Moore said she almost quit and walked away, but that she had to keep pushing through. Every one of the boxers who spoke at the welcoming party said they’d had similar moments where they considered quitting.

“It was so focused, such a grind,” said Moore. “When you finally achieve that goal, there’s a sigh of relief. Every ounce of energy is worth it for that moment, [but] you have to stay focused and don’t quit.”

All of the boxers agreed that the close knit community at the Alexandria Boxing Club helped push them through some of those low moments.

“Boxing is a family,” said Stevenson. “It’s a lifestyle. You grow as a team and as a person.

Mayor Allison Silberberg and City Councilman John Chapman were among those welcoming the boxing champions home.

“The Alexandria Boxing Club is astounding,” said Silberberg. “The successes are the result of great effort and tremendous discipline. They’re not just champions in the ring, they’re champions of our city.”

The club has been active since the early 1980s, but Dara Shen, team manager of the Alexandria Boxing Club, said the club continues to fight for its place in the city.

“The face of the neighborhood is changing,” said Shen. “It’s gentrifying.”

Shen says the club is facing pressure from the city, who Shen says think the space could be better utilized and are asking the club to meet new regulations. The Alexandria Boxing Club is currently negotiating a lease with the city, which expired in September but has been continued until Jan. 1, 2018.