Even with an ice storm, it was a beautiful day to remember, honor and teach. 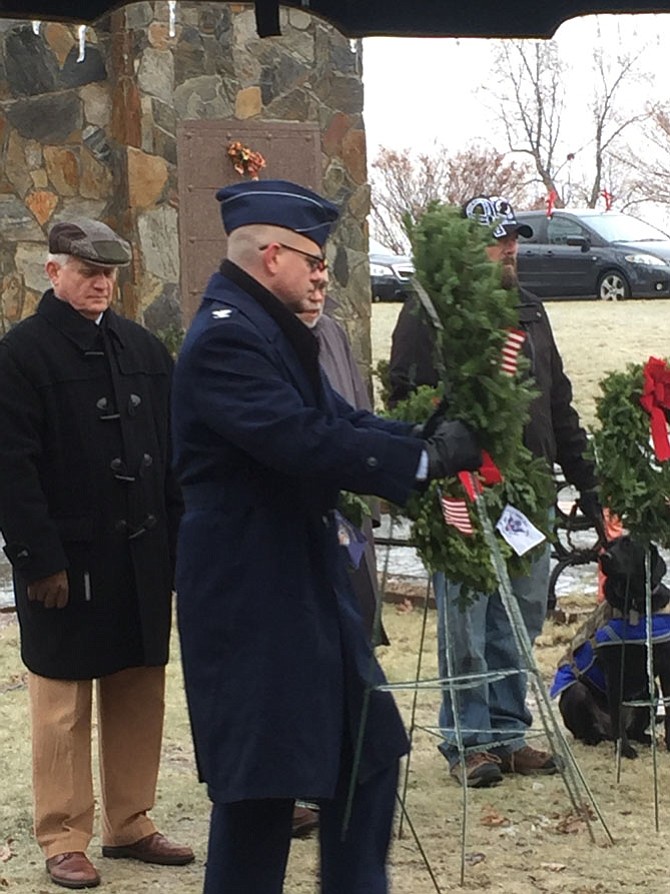 Dressed for the icy weather, a volunteer begins to hand out wreaths to participants waiting in line at Chestnut Grove Cemetery, an official National Wreaths Across America Day site. 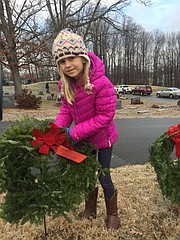 Town of Herndon, in partnership with Herndon Woman’s Club, joined in to support National Wreaths Across America Day Saturday, Dec. 17 at Chestnut Grove Cemetery. Kathy Herbert, President of Herndon Woman’s Club, said, “Today, we show a united front of gratitude and respect across the United States of America as we remember the fallen, honor those who serve and teach our children the value of freedom.” Seven service members who represented the five branches of the U.S Armed Forces, Merchant Marines and POWs & MIAs laid wreaths to honor those who served the country.

According to Nancy Farr, Executive Board Member, Herndon Woman's Club, the event took a year to plan, fundraise and identify the 739 gravesites of deceased veterans. Susy Legerwood, a member of Herndon Woman’s Club, was key in the identification. “It was a labor of love,” Legerwood said. “Every time we went out, we found more. We just located 10 who have no markers. We made tags with their names and the gravesite locations. We’ll hang a nametag on a wreath. Even though a marker doesn’t say their name, we will say the name aloud, so the veteran is not forgotten.”

Carol Wright, Committee co-chair, said that the theme for 2016 was “Say Their Name.’ In Herbert’s remarks, she encouraged volunteers to say the veteran’s name aloud when they placed the wreath and take a moment to thank the veteran for their service. “Each wreath is a gift of appreciation,” Herbert said, “from a grateful America.”

An ice storm had threatened to postpone or cancel the ceremony but Herndon’s Department of Public Works treated area streets and roads in the cemetery. Earlier that morning, David Roscoe, Cemetery Manager, said, “We’ve got the salt. We’re moving forward with it.” Wright added: “These veterans had been in so much worse weather than this. It is really a beautiful day, any day you can honor our veterans.”

As noon approached, hundreds of citizens from the Town of Herndon arrived. Young and old, boy scouts and girl scouts, families holding the hands of very young children and families supporting the arms of their elderly. They came in holiday stocking hats and headscarves, and each was offered a live balsam wreath to place on a veteran’s grave.

Jennifer Baker, Vice Mayor of Herndon, said, “We treasure that we have a town cemetery with which we can honor all 739 of our veterans.”