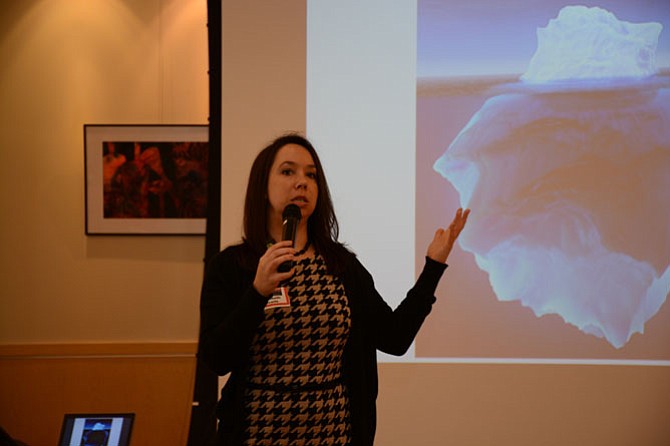 Residents came to the Stacy C. Sherwood Community Center in Fairfax for a multi-hour seminar on what human trafficking is and how to get involved with prevention and detection and taking action.

Thirty years ago, “Jen” was lured into a pornography ring and sexually abused by a man who initially pretended to be her friend.

“She lived in so much fear,” said Elizabeth Scaife, director of Training at Shared Hope International and keynote speaker at a Jan. 31 informational meeting about human trafficking. “He manipulated her, used her family, saying he was going to hurt them.”

Scaife used Jen to illustrate the lifelong negative effects on victims of human trafficking. “They’re trauma-bound,” she said, “from living in the climate of fear that creates.”

After defining human and sex trafficking for the audience -- the act of forcing anyone to take part in a sex act for compensation -- Scaife said that Fairfax County has ranked among the top areas in the United States in prosecuting gang-related trafficking.

The issue is widespread, and localized, but isn’t particularly more acute in Fairfax than other localities, Scaife said. But it is being pursued more aggressively.

Scaife described four main ways people become victims of trafficking: being controlled by pimps, being turned out by their own family to provide income, a gang-controlled situation and runaway sex.

“When a young person is out on the streets, not having planned ahead, running from something,” Scaife said, “nothing is free.” A desperate boy or girl might meet someone willing to give them a place to sleep, in exchange for sex. “They might buy a burger for a blow job.”

TRAFFICKING would not exist without the demand, Scaife said. Ninety-nine percent of buyers are male, she said, “people with reckless disregard who don’t care if it’s a minor.”

“Traffickers are all different, they live among us and can be anyone,” Scaife added. “They prey on the vulnerability of kids in our society.”

The progression of a pimp or pimping gang includes recruiting, grooming, breaking down, turning out and control.

“They begin to buy into the lie that life doesn’t matter and theirs doesn’t mean much,” said Scaife.

Detective Bill Woolf with the Northern Virginia Human Trafficking Task Force has given numerous such talks around Fairfax County, raising awareness of trafficking. Woolf was one of four expert panelists who spoke at the event after Scaife.

At a forum held at West Springfield High School in February 2015, Woolf said in 2014, his office saw 156 leads in Northern Virginia, often with multiple victims. In that same time, they identified more than 261 victims and recovered 108.

On Sunday, Woolf said one of the biggest threats in the trafficking world right now is social media and the access people have to information.

“It comes with a price,” he said, giving the example that traffickers can use Facebook, Twitter, Instagram and other platforms as a mechanism to scouting potential victims.

“We must be responsible for what we allow our children to have access to,” said Woolf.

Woolf then gave the recent example of a 14-year-old girl who was approached by a twentysomething man and after talking for a while, the two became friends on Facebook. The detective was able to talk with the girl and encouraged her to attend a presentation of the Just Ask Prevention Program. The girl determined she was being recruited for trafficking and turned her Facebook account over to Woolf.

Woolf, as the girl, set up a meeting with the man. He was arrested and is now serving time in a federal prison.

“It’s so important that we talk about this,” Woolf said. “Talking to her, she had no idea what trafficking was before going to the presentation. Just to give them the knowledge, the tools to prevent this,” is huge, he said.

Fairfax County Public Schools K-12 Coordinator for Health, Family Life and Physical Education Elizabeth Payne, Ed.D. agreed with Woolf. “What’s not working is silence,” she said. “We have to get that conversation to the forefront and put a name on it.”

Payne is optimistic that more attention is being paid to human trafficking around Virginia. “We are taking the veil away,” she said.

Just Ask Prevention Project President Beth Saunders echoed, “We’re starting to break down the barriers of what this is.” Part of that is just understanding the scope of the problem, that it isn’t just happening in conflict zones, overseas. “The localization of this is mind-bending,” she said.

After the panel introductions, the seminar broke out into more detailed discussions of the involvement of laws and law enforcement, schools and business and the international scope of the problem.