Lorton: More than a Game
Votes

Lorton: More than a Game 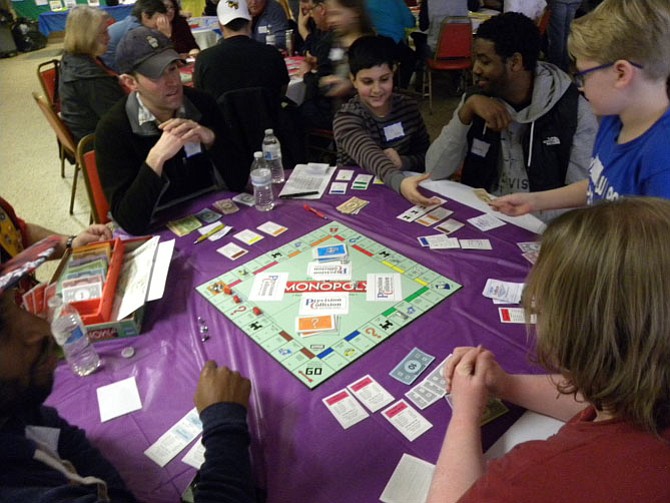 The players at this table during second round of the ninth Monopoly tournament wheel and deal to buy and sell property. Photo by Abigail Constantino.

From left, volunteers Daniel Eckhardt, of Fairfax Station, 17, and Andrew Whelan, 18, of Lorton, set up the table for the Monopoly tournament benefiting the Lorton Community Action Center on Saturday, Feb. 6.

From left, Valmik Rai, 13, of Fairfax Station, Cody Wakenight, 13, and Max Bragg, 13, of Lorton, hope to win the $500 grand prize at the ninth Monopoly tournament in Lorton on Saturday, Feb. 6. 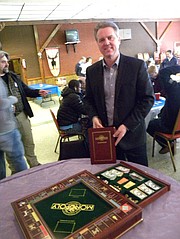 Almost 100 players gathered at the Woodbridge Moose Lodge 583 in Lorton on Saturday, Feb. 6 for the ninth year to play a friendly but serious game of Monopoly.

Volunteers set up each table with the board game. In the middle of the room, under a disco ball, is a special edition Monopoly set with gold-plated hotels. This is the set on which the final round will be played.

The room was decorated with all things Monopoly--a property square, a cut-out of the racecar token and Rich Uncle Pennybags, also known as Mr. Monopoly.

Seth Williams, 16, of Lorton, made it to the second round. This his fourth year attending.

Participants got breakfast prepared by the South County Cares Church, lunch from Glory Days Grill in Lorton, a chance at several Monopoly-themed door prizes, a shot at the jackpot, and more importantly, the opportunity to help neighbors in need, all for the $25 entry fee.

Organizer Ron Kowalski wanted something fun to do for the community and to make money for Lorton Community Action Center, of which he is the president of the board of directors. He owns Ron Kowalski Real Estate Group. He also used to work for Hasbro, which produces Monopoly. This tournament was practically fated.

This is the fourth year that proceeds from the tournament will go to LCAC, a nonprofit providing help to low-income individuals and families in Fort Belvoir, Lorton, Newington and areas in southeast Fairfax County.

The connection between the tournament and LCAC, for Kowalski, is the money raised that would be used to serve between 200 to 275 families a week.

LCAC executive director Linda Patterson said that the money raised will be used to purchase meat for the food pantry, pay for seniors prescriptions and help pay for emergency rent and utilities for local families to prevent homelessness.

With the roll of the dice, players can win big or lose big in the game. The Chance cards can unravel a player’s carefully planned nest egg, causing him to become penniless and indebted to the bank.

Similarly, those who use the services of giving organizations, such as LCAC, may have experienced unexpected circumstances that put them at risk of losing their incomes or their homes. It could be an injury, job loss or an illness--something unplanned and unexpected.

“Monopoly transcends itself over time,” said Kowalski. “An eight-year-old can play with older people and still win. It’s a perfect blend of skill and luck.”

“It warms my heart to see people come out to raise money for a charity.”

FOR PEOPLE who may have had a downturn in their fortunes, giving organizations can give a hand up.

“It warms my heart to see people come out to raise money for a charity,” said Kowalski. “Nice to see them doing this than being home playing video games or out on the street.”

“LCAC is grateful for the community support of such a fun, family-oriented event which nets real impact on local families in need,” said Patterson in an email.

The first place winner of the tournament was Alison Gibbons. Second place and $250 went to Dave Reading. Cody Williams won $100 in third place. The event took in $7,000 from entry fees and corporate sponsorships.

For more information about the Lorton Community Action Center, go to http://www.lortonaction.org/.