Residents tell legislators of priorities ahead of the 60-day session of the General Assembly. 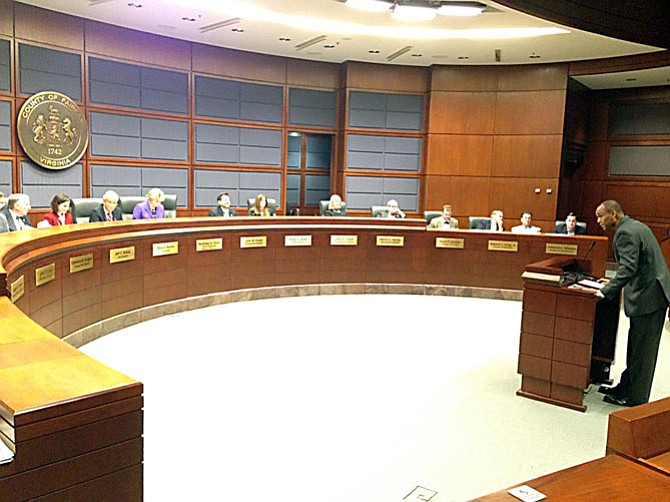 Keith Foxx of Springfield, who has volunteered as a mentor for foster children in Fairfax County for more than a decade, spoke in support of legislation sponsored by state Sen. Barbara Favola for Fostering Futures. Photo by Joan Brady 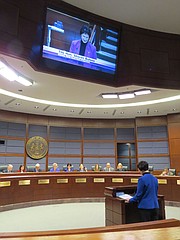 “Please pass legislation so gun stores are not located within immediate proximity to schools,” said Quesada, who testified before the county’s delegation to the General Assembly Saturday, Jan. 10 at Fairfax County Government Center.

“This is not a second amendment issue, and it is so infuriating the amount of time it gets twisted,” she said, requesting authorizing legislation to allow localities to regulate the proximity of a gun store to a school.

Nearly 100 speakers testified Saturday, Jan. 9, in a hearing that lasted more than 240 minutes.

The 2016 session of the Virginia General Assembly starts Wednesday, Jan. 13, and will last six weeks.

Leinz testified on behalf of the NOVA Chapter of the Brady Campaign to Prevent Gun Violence and the Virginia Gun Violence Prevention Coalition.

“We cannot stop all gun deaths but certainly we should do everything we can to stop some.”

“We cannot stop all gun deaths but certainly we should do everything we can to stop some. And surely we all can agree that there are some categories of people who should not have access to firearms — that is why we have prohibited purchaser categories; criminals, domestic violence abusers, the adjudicated mentally ill and terrorists should not have easy access to guns.”

CHAIRMAN SHARON BULOVA was the first to testify Saturday.

“Fairfax County is often described as a wealthy community, but we also have many individuals and families struggling financially,” she said. “More than 52,000 students in Fairfax County Public Schools qualify for free and reduced lunch. Only four school divisions in the state have more total children than we have children living in low-income households.”

State cuts to K-12 education in recent years have cost localities $1.7 billion per biennium, Bulova said, “and have been detrimental to our efforts to educate our children.”

“A state that is in the top 10 in income should not be in the bottom 10 in state education funding.”

— Sharon Bulova, Chairman, Board of Supervisors

“A state that is in the top 10 in income should not be in the bottom 10 in state education funding,” said Bulova.

Dozens spoke of the need for full funding for K-12 programming and education.

Steve Greenburg, president of the Fairfax County Federation of Teachers, supports legislation for an increased county tax on cigarettes.

“If people are going to kill themselves and run up everyone’s health care costs by smoking the stupid things, then we should certainly get some return for the costs they incur the rest of us,” he said.

Advocating for the importance of the investment on education, Dean Howarth, a teacher from McLean, talked of the need for schools to emphasize critical thinking, not standardized test scores.

“We always say, ‘Great minds think alike. No they don’t, great minds think differently,” said the physics and science teacher. “Students come back. You know what they remember? It’s never ever their SOL score.”

Del. Marcus Simon stopped the testimony to say Howarth was his physics teacher in high school.

Simon remembered Howarth getting students on rollerskates to learn about physics. But emphasis on standardized testing has robbed teachers of the freedom to teach in creative ways, Howarth said.

“Students have lost the joy of learning because their teachers are shackled,” said Howarth. “I like being like Bill Nye, stoking fun in education.”

Brad Ward, of Fairfax Station, also spoke for Critical Thinking Revolution and advocated for less rote teaching and emphasis on standardized testing. “In my professional life, I have never been given a multiple choice test,” he said. “I never asked a potential employee to choose from a list of possible answers. … Rote learning does not prepare students for the jobs of today. 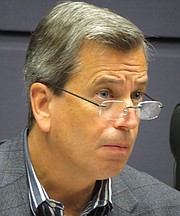 THE DISPARITY between Virginia’s rank as one of the 10 most wealthy states and spending on social services and education was invoked by many speakers.

Keith Foxx spoke in favor of state Sen. Barbara Favola’s bill to help young adults that age out of foster care without being united with family or being adopted.

“It's critical that you support and fund Senator Favola's bill ‘Fostering Futures’ for the more than 500 young adults who age out of foster care at age 18 in Virginia every year,” said Foxx, of Springfield. “Helping these young adults grow successfully to independence will save the commonwealth hundreds of millions of dollars over their lifetimes.”

With a waiting list statewide of more than 10,000 people with intellectual and developmental disabilities for access to services in the community (through Medicaid waivers), only 325 new slots are included in the Governor’s proposed budget. This is the minimum number required by settlement agreement between the Justice Department and the Commonwealth, said Rikki Epstein, executive director of the ARC of Northern Virginia.

“We can’t keep doing the minimum and hoping the time will come when the problem solves itself,” Epstein said, calling for the addition of 800 waivers in this cycle. This would “give hope to those with most urgent need, hope to those who have been waiting the longest.”

Molly Long of the Fairfax-Falls Church Community Services Board pointed out that people moving out of residential facilities like Northern Virginia Training Center are getting priority for services ahead of those who have been on the waiting list for a long time, and the waiting list continues to grow. Nearly 1,000 people locally qualify for services urgently, but their waivers are not funded at the state level, including people with intellectual disabilities whose elderly parents can no longer meet their needs at home, and youth aging out of special residential services who are in danger of becoming homeless.

“Detoxification is often the important first step,” she said, but clients seeking help must wait two-to-three weeks or longer for a detox bed.

“Waiting decreases the chance of successful intervention,and puts people’s lives in danger. We must have more detox beds.”

Richard Kennedy of Lorton testified in favor of sensible marijuana policy and cited the “insanity of arresting people for use of a drug that is an order of magnitude safer than alcohol or tobacco.”

SEVERAL OTHERS spoke of the potential dangers of legalizing marijuana, even for medical purposes.

Sara Freund, of Great Falls, and a member of the Unified Prevention Council, said that states with medical marijuana laws have higher levels of youth use of marijuana. She also cited a recent survey showing that a higher percentage of Fairfax County 12th graders than national average have recently used marijuana.

Jerry Foltz of Centreville, a retired minister in United Church of Christ, was one of several speakers who requested increase of the minimum wage. “We need to support the people who are working hard,” he said. “Those on the bottom rung who get a little increase in income, they spend it. That stimulates the economy. This should be nonpartisan issue to raise the minimum wage. It’s a good year to do it. It doesn’t cost much to do it, and it has all kinds of benefits.”

And Medicaid expansion was discussed by many.

Brooke Annessa of Fairfax, Maya Simbulan of Burke, Brian Rosen of Vienna, and Sarah Pickford of Springfield spoke in support of Brain Injury Services of Northern Virginia, and thanked members of the delegation for past support. “We tell families we will walk with them after the unthinkable has happened. … We give a voice back to survivors of brain injury and their families,” said Annessa. 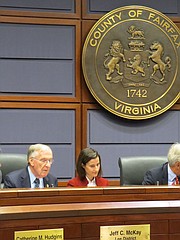 “YOU NEED TO WRAP it up,” said state Sen. Dick Saslaw (D-35), moderator of the four-hour plus hearing, said when people ran over their allotted time.

Others talked of the need for reduced class sizes, exposure to foreign languages in elementary school, and giving teachers more freedom to teach.

Attorneys talked for the need for all 15 allotted circuit court judges and eight juvenile and domestic relations court judges to be filled, and several called for keeping Judge Jane Roush on the Virginia Supreme Court.

“Cases are taking forever,” because of the vacancies, said Joseph Dailey, of McLean speaking for the Fairfax Bar Association. “This is about justice for your constituents.” A case that begins this week, he said, won’t be resolved until after the next World Series is over.

Chief Public Defender Todd Petit asked the delegates and senators to enact legislation to change criminal discovery so defense attorneys “have all the evidence beforehand,” to be able to go forward with a fair trial. The issue was studied in 2014 by the Virginia Supreme Court.

Fairfax’s Douglas Stewart and McLean’s Marc Rosenberg, of the Virginia Sierra Club, Eric Goplerud, executive director of the Faith Alliance for Climate Solutions, and John Cartmill, of Herndon, were just some of the speakers who addressed the environment as issues including storm runoff, infill development, tree canopy, transportation choices, clean energy, solar and wind power and the health of the rivers and Chesapeake Bay.

Rosenberg of the Virginia Sierra Club called for more efforts to clean up Virginia’s rivers by addressing sewage treatment plants that overflow in heavy rains, runoff from farms, toxic chemicals and heavy metals from mining operations and coal pits. Many people support removing plastic shopping bags from the environment. “At least stay out of the way and let localities act in this area,” Rosenberg said.