Centreville resident has a leading role in “The Music Man.”

When fast-talking Harold Hill comes to River City, Iowa with a grand plan to create the finest band in America, the townspeople are thrilled. But straight-laced librarian Marian Paroo thinks it’s all just a scam. 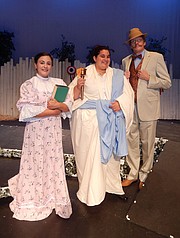 Posing in character are (from left) Elizabeth Ferrante, Sara Alipanah and David Britt.

That’s the premise behind City of Fairfax Theatre Co.’s upcoming musical, “The Music Man,” which includes a Centreville resident in its cast. It’ll take the stage, July 22-30, at Lanier Middle School, 3801 Jermantown Road in Fairfax. There’s a live, pit orchestra and a cast and crew of 65.

“Everybody knows and loves this story,” said Director Lisa Anne Bailey. “It’s a classic, feel-good musical, complete with quirky characters. The cast is a mix of both new and experienced actors from the local area. They’re working hard and their voices are lovely, across the board, especially the quartet. It’s a community-minded production, and the story’s about a community, so the cast really suits it.”

Portraying Mayor George Shinn is David Britt of Centreville’s Centre Ridge neighborhood. “Mayor Shinn comes off as pompous and overbearing, but he loves and is protective toward his family,” said Britt. “He also speaks in a very convoluted way and is concerned about everyone’s ‘phraseology’ when they use foul language.”

This show is special to Britt because, more than 40 years ago, he acted in it as a townsperson with his mother, who played a town gossip, along with his father — who played the mayor, too. Britt likes this part, he said, because “Mayor Shinn takes life so seriously, and I don’t, but he really is a caricature. And it’s also fun to show his soft side a couple times.”

His favorite number is a blend of “76 Trombones” and “Goodnight, My Someone” near the end of the show, because “That’s where you see the love between Marian and Harold really come out.” He said audience members will see similarities in the characters’ personalities to people they know today. And, he added, “There’s a tremendous amount of energy in this show, plus a sense of nostalgia for how things were.”