After foster care experience: Architecting his own path. 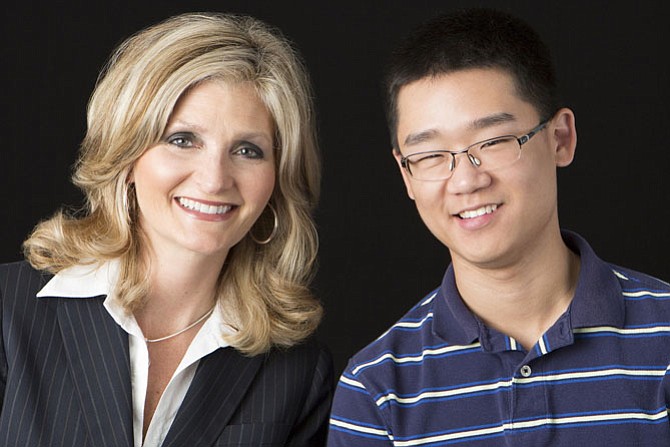 Lesley Field and Joel Choi: When Joel’s foster mother left town for a multi-week trip, he was sent to Field’s home in Vienna. Photo by Joan Brady/The Connection

Joel Choi and Melissa Hish: They served together on the Fairfax County’s Youth Advisory Committee where Melissa observed Joel’s “great leadership skills and follow through.” 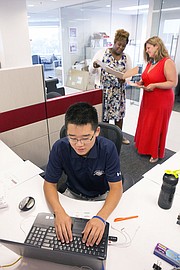 Joel Choi with Missy Jackson and Melissa Hish: He is appreciating the opportunity they have given him.

If you are interested in making a difference for a child in foster care:

Slight and soft-spoken, Joel Choi has an unexpected inner strength that comes through as he tells his story of a father with high expectations, a son’s mortal fear of not meeting them and what it has meant to take control of his own life.

Joel was taken into foster care when he was a high school junior, after reporting to a coach what was going on at home. Schools are “mandatory reporters,” and, as such, they are legally compelled to call social services in a case like Joel’s.

Joel said he doesn’t remember much about those early dark days. He’s been told that it is likely because he was in shock. But they included having to process the past and the present while going back and forth between foster care/group homes and his parents’ house. Ultimately he was removed from his parents’ home for good and placed in a foster home with a single, foster mother.

The foster care system anticipates that there may be times when a foster parent either needs a break, or needs coverage for their foster children. In those cases, the children are temporarily moved to “respite” homes. When Joel’s foster mother left town for a multi-week trip, he was sent to Lesley Field’s home in Vienna.

TODAY, AT 20, Joel doesn’t recall their first interaction, but Lesley smiles broadly as she remembers the text she received from him, “Are there any rules I should know about?” “Good manners, good grammar and don’t let the cat out,” she said she texted back.

Joel was accustomed to rigidity and rules from adults, “I wanted the opportunity to make my own mistakes and learn from them,” explains Joel, “[Even in those few short weeks], Lesley gave me that chance.” He recalls, that her “attentive listening” style reassured him that she wouldn’t judge and that she truly wanted to help. They remained in contact after he returned to his foster home.

When Joel left for Christopher Newport University at 18, he was out of foster care for good. But, as a foster care alumnus, working and in college, he was eligible for an independent living stipend.

With scholarships, including a Gates Millennium Scholarship, stipend and income from babysitting and caddying at a country club, one might think Joel was set. But budgeting carefully is just one of the things this newly emancipated college student needed.

CNN reported that Barbara Duffield, policy director of the National Association for the Education of Homeless Children and Youth said “58,158 college applicants indicated that they were homeless on federal financial aid forms for the 2012-13 academic year.” And she feels that that number is likely understated.

Joel didn’t have a place to spend holidays and breaks. With no place to go, Joel turned to Lesley, with whom he has remained in touch. Leslie said she did not hesitate to take him in. “I wanted him to know that even though he was 18, he could always count on me. No one is really an adult at 18, and I wanted him to know he had support,” she said.

And Lesley hasn’t just provided a place for Joel to crash on breaks. He acknowledges that he doesn’t know what he would do without Lesley, “She gives great feedback. She is always there. No matter how stressed she is, she is willing to drop everything. She is always smiling and ready to help.”

Joel keeps close track of his income and expenses, but with just a net positive of $50 each month, after expenses and $100 to savings, more than one day of work missed or one unexpected expense can derail his budget and eat through his meager savings quickly.

Last fall he needed a tonsillectomy, it was fortunately covered by his Medicaid insurance (available to foster care alumni until they are 26), but it meant he couldn’t work for two weeks. Joel said he hates having to ask for money, but when he has needed a bridge loan, he is thankful that he has Lesley to step into the breach.

Joel Choi and Melissa Hish: They served together on the Fairfax County’s Youth Advisory Committee where Melissa observed Joel’s “great leadership skills and follow through.”

Melissa Hish and Joel served together on the Fairfax County’s Youth Advisory Committee, through the Fairfax County Department of Family Services. That was where Melissa observed how Joel quietly watched for young members of the committee who were uncomfortable and figured out how to draw them in. Melissa said she saw, “great leadership skills and follow through.”

Melissa appreciates the support she got from her own parent. Her father was able to introduce her to people in her chosen field to help her get her foot in the door. “I had to work hard and prove myself once I was at the table, but he made sure I actually got a seat at the table,” said Melissa. She has seen that kids who grow up in foster care don’t have the same support she did and decided, “[If] I had an opportunity to provide a seat at the table for someone else I should do so.”

After Joel graduated from James Madison high school in 2014, she suggested he contact her in January to talk about an internship at Wells and Associates in Tyson’s, where she is an executive vice president. Joel’s goal is to become a CPA and while Wells isn’t an accounting firm, Hish’s department includes finance.

THE SUMMER OF 2015, Joel was a full-time, paid intern at Wells & Associates, working directly for Melissa (Missy) Jackson. Missy was very impressed by Joel’s, “dedication to his job, willingness to learn and fascination with all aspects of the department.” Last week, having completed his sophomore year of college, Joel is was once again back at work at Wells.

Joel truly appreciates the opportunity that Melissa and Missy have given him, “The best things about working at Wells are the hands on experience, the people and the environment of the workplace.” And he values “getting used to office hours and working in a cubicle” as part of his work experience. Joel is thrilled to have returned for the summer of 2016, “Because this is my second year, I understand a lot more of what I'm asked to do and that’s definitely something I don't take for granted.”

The laughing 15-year-old explains their relationship, “We like to compete. About everything. He always helps me with homework or something I might be struggling with. He’s a great kid. Well… almost adult.” Hearing that, Joel pipes in, “I’m an adult already!” These two are truly siblings.

It’s clear how proud Lesley is of Joel, who appears on her Christmas card each year and whose family loves him as much as she does. “Joel has so much talent, spirit and resilience. I’m just helping. He is architecting his own path.” she said.

Joel anticipates that things won’t change much between them going forward, “I see us being just as close. I don’t know where I’ll be living. But I see her as a mom. So 20 years from now? She will still be my mom.”