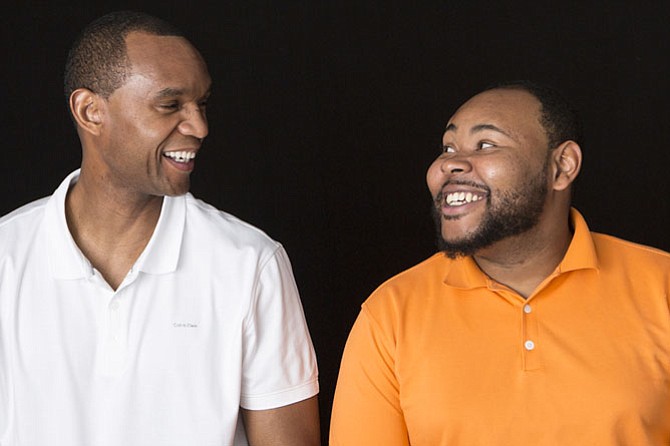 “Travis was an amazing person when I met him. In the past 9 years he has grown into an amazing man and father,” says Alexis Albritton. The two plan to get married next year.

May Is National Foster Care Month

http://www.fairfa...">Learn about ways to make a difference in the life of a child currently living in foster care

Travis Parnell and Keith Foxx don’t remember exactly when they met. Parnell was around 14 and had been in foster care for 6 or so years. He estimates he had already lived in 10 different foster homes, several in Fairfax County. Foxx, a civil engineer from Springfield, was married with two children.

Foxx says that one of the things that set Parnell apart was that despite everything he had been through, he didn’t feel sorry for himself. More than that, while Parnell acknowledged the challenges of being a foster child, he was appreciative of the benefits of being in care.

Parnell was able to stay with one foster mother for almost 5 years. “Miss Bertha,” he says, made it possible for him to be a regular kid. That is unusual for foster kids who move often and aren’t always able to participate in school and sports activities, attend slumber parties or go to the prom.

During those years with Miss Bertha, Parnell had stability and chores and she treated him like family. In fact, she still does. He is brother to her older children and uncle to the younger ones today.

“When you are in and out of foster homes, it’s hard to trust,” Parnell says. “Social workers and other professionals are doing a job.” But when he learned that Foxx was taking time away from his wife and two young daughters to spend time with him, he knew Foxx was different.

And it wasn’t just that Foxx spent time away from his family. Parnell was also welcome in the Foxx home. “No one had ever brought me into their house before,” he says quietly as his four-year-old son sits contented in his lap. “I wanted Keith to know that he could trust me with his family.”

Foxx’s older daughters laugh as they say that when he first started coming around, they asked their parents if Parnell was their new brother. Twelve years later, that’s the way they introduce him.

“I thought it was great,” says Foxx’s wife, Michelle. “But it wasn’t unexpected. That’s who Keith is, the type of guy who will reach out to help the next person.”

“There were people in my life that gave me good advice and recognized that I had potential. It was that little bit of encouragement on their part that made the difference. I was just passing that on,” says Foxx.

Parnell nods, “People will say, ‘I know just how you feel’,” but to Parnell, those were empty words. “Nobody knows how you really feel. No one can put themselves in somebody else’s shoes. But, you can tell someone you feel for them and you are here to help them.”

The bond between them took time to build. In those early years, they got together two or three times per month. Parnell recalls that if he was reluctant, Foxx was unimpressed. “You are coming dude,” Foxx would tell him. Often, Foxx’s daughters would come along too and when the baby arrived, she joined them as well.

Out of seven biological siblings, Parnell is the only one to have earned a high school diploma. Parnell says that he was told by social workers that he should drop out, that he wasn’t going to make it. He wanted to prove them wrong and he recognized that having a diploma would expand his opportunities.

For young adults who have the continued support of parents and family, the path to independence can be daunting. For those without strong support, it can feel downright hopeless. When Parnell left foster care at 18, he was completely responsible for himself.

Those early years were very dark. Parnell worked in a series of dead-end sales jobs that didn’t afford him a reliable income. Things got worse he says, when, “I made a mistake and my driver’s license was suspended. That limited my job opportunities even further.” It seemed hopeless when he found a job that was good money, but required a license.

That was when Foxx stepped up, “It was a blessing,” says Parnell, “I didn’t have anybody else who would do that for me. No one who would say, here are the stipulations. I will help you if you do this.” Parnell is proud to say that with his reinstated license, he got that job. And five years later, he is working at a national company in Lorton, a senior technician in HVAC/air duct cleaning.

The hours are long and the job pays on commission, but Parnell says if you have patience, customer service and sales skills, it’s a good job. And he enjoys educating people on what they can do to improve their air quality, especially for families who have children. It makes him smile to know that when he leaves a job, people will breath better.

Parnell and his girlfriend, Alexis Albritton, have been together since they were 17. Albritton had imagined a future with the two of them and a house full of dogs. But today, you would never know that children weren’t always part of her plan, as she fusses over young Xavier.

Albritton works as a veterinary assistant and receptionist at Crosspointe Animal Hospital in Fairfax Station. She too has goals for her future. Her sights are set on becoming a certified veterinary tech.

Parnell and Albritton said their biggest challenge is their budget; making sure that more money is coming in than needs to go out. They live frugally, rarely eating out or buying clothes; they cut their own hair and are happy for the generous donations to the Salvation Army that allow them to dress Xavier at prices they can afford.

The couple appreciates having Albritton’s parents and Foxx to offer guidance. Now 26, Parnell says there isn’t anything he wouldn’t share with Foxx. They check in with each other regularly, “We are both men with our own families. If he has an issue, he’ll call and say what do you think I should do? We talk through it. Then I tell him, ‘time to be a grown man’ and that gives him the confidence to handle the situation,” said Foxx.

“Not everyone has the tools to make it in this world,” says Parnell, “The only thing you can do is put the past behind you and take the initiative to keep moving forward.”