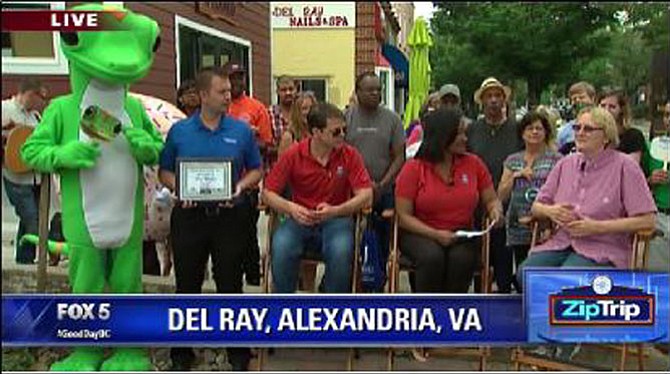 Del Ray Business Association Treasurer Pat Miller received the FOX5/Geico Hometown Hero award during FOX5's ZipTrip to Del Ray on June 3. Miller, who has lived in Del Ray for over 30 years, is often described as the “unofficial mayor of Del Ray.” Miller is a past president of the Del Ray Business Association; has served on the board for over 20 years; and co-chairs the Special Events Committee, which plans First Thursday, Taste of Del Ray, Halloween Parade, Turkey Trot & Holiday Tree Lighting. Miller also serves as market manager of the Del Ray Farmers Market; chair of Art on the Avenue; serves on the Alexandria Police Foundation Board; served on the Kelly Cares Foundation board, which was responsible for several major projects for special needs children, including the Miracle Field; is a board member of the Community Partners for Children; and is a former chair of the Alexandria Commission for the Arts; among numerous other volunteer roles. She was named an Alexandria "Living Legend," and the Farmer's Market lot in Del Ray was recently renamed "The Pat Miller Neighborhood Square" in her honor.

The FOX 5 "Hometown Hero" video is at http://www.fox5dc.com/hometown-heroes.