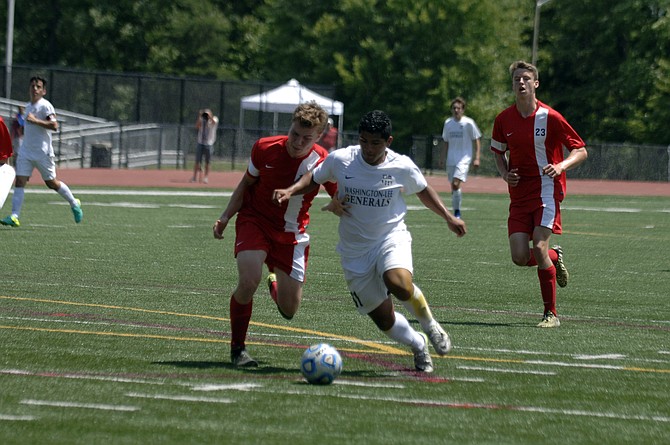 Washington-Lee senior Maycol Nunez scored four goals against Grassfield in the 6A state semifinals on Friday. Photo by Craig Sterbutzel.

The Washington-Lee boys’ soccer team beat Grassfield 6-0 in the 6A state semifinals on Friday, thanks in large part to four goals from senior Maycol Nunez.

The Generals also got goals from Andrew Kamian and Abdullah Al-Rubaiy.

W-L (17-1-2), the 6A North region champion, will take on First Colonial, the 6A South champion, at 5 p.m. today in the state final. First Colonial defeated Yorktown 2-1 in the semifinals on Friday.

The Chantilly baseball team defeated Cosby 4-1 in the 6A state semifinals on Friday at Robinson Secondary School, setting up a third meeting with Battlefield.

This will be Chantilly’s third straight state final appearance. The Chargers lost to Western Branch, 6-4, in 2014 and Madison, 6-5, last season.

The girls’ team will take on Woodson at noon in the 6A state final. The Rams are undefeated (20-0) and have not lost to a public school opponent since 2014. Robinson has defeated Woodson twice this season, including an 18-7 win in the 6A North region championship game on May 31.

The boys’ team is going for its third consecutive state title. The Rams (19-2) will face James River at 5 p.m.