Junction: A Crossroads of New Food and Old Favorites
Votes

Junction: A Crossroads of New Food and Old Favorites

The new bakery and bistro aims to open shortly after Independence Day. 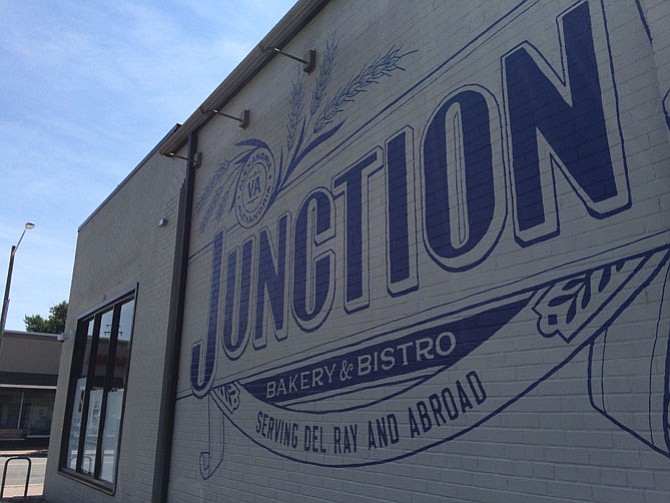 Junction: “We wanted to try to stay true to Del Ray” and its history, chef Nathan Hatfield said. Photo by Michael Lee Pope.

On the corner of Monroe and Mount Vernon avenues, a landmark building has been given new life. What’s most noticeable to neighbors and frequent visitors through Del Ray is the new mural: “Junction Bakery and Bistro, Serving Del Ray and Abroad,” it reads in gray paint, splashed across the side of the building that used to house Mancini’s at 1508 Mount Vernon Ave.

And there, at a major junction into the neighborhood — the gateway of Del Ray, really — is where chef Nathan Hatfield and his team are looking to make inroads with Alexandrians.

“We wanted to try to stay true to Del Ray” and its history, Hatfield said, from its days as a railroad junction to its newer life as a bustling, booming neighborhood that Hatfield himself has been a part of for years (he lives a stone’s throw away from his new restaurant). “… We’re hoping to become a part of this community, really.”

Junction, which is scheduled to open shortly after the Fourth of July holiday, will aim to be many things to many people. From breakfast sandwiches to dinner and drinks, the restaurant’s hours will be long — and, Hatfield hopes, its scope wide.

“In the morning you’ll be able to find fresh coffee from Commonwealth Joe Coffee Roasters down in Culpeper,” Hatfield said. Lunch will bring with it mostly locally purveyed salads along with sandwiches and small plates. And though some perennially well-known favorites — BLTs, turkey sandwiches, pastries — will be on the menu, look for some new twists on old favorites as well.

To wit: A breakfast sandwich starring “a fried egg and bacon and kimchi on a steamed bun,” Hatfield said.

The look and feel of a restaurant is nearly as important as the service and food. The ambience at Junction aspires to be a blend of old and new, of modern and traditional, Junction’s Lauren Belisle says. Natural lighting, marble, granite, and glass all combine to make what Belisle hopes will become a “second home” for visitors.

“We preserved some of the tin ceiling tiles from when the building was a grocery store in the 1950s,” she said. Also, the exterior mural “has been getting a lot of love and buzz. And that definitely … is a great embodiment of the look and feel of what the interior will look like as well.”

But in the end, Hatfield aims for the food to be the star of the show. And he’s striving for Junction to take hold of the neighborhood in short order.

“I’m most proud of the fact that I get to hopefully be a part of this community and show everybody some new fresh ideas,” Hatfield said. “Hopefully we’ll turn on some people to new food.”