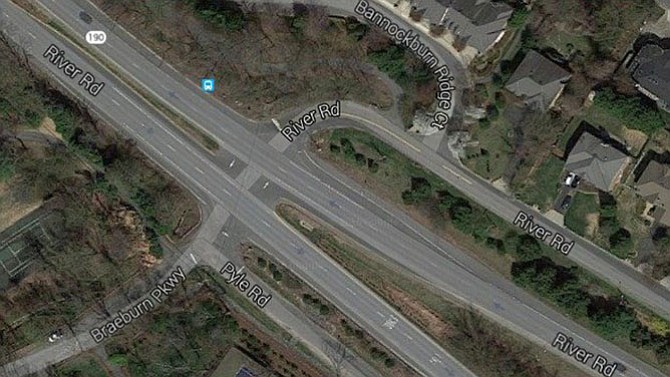 Following the fatal collision at River Road and Pyle Road on Saturday night , Feb. 27, an online petition attracting more than 3,000 signatures is calling for a traffic light at that intersection.

On www.change.org, the petition states: “For years, the Bannockburn and Whitman communities have asked the Maryland State Highway Administration to install traffic signals at this dangerous intersection. Many students must cross or turn into this intersection in order to enter Walt Whitman High School's parking lots. Installing traffic signals would make the intersection safer for nearby residents, students, teachers, and drivers alike. Not only will traffic signals help protect drivers, they will also help ensure the safety of pedestrians crossing River Road.”

In the letter, the elected officials wrote: “As representatives of the area at the state and county levels, we believe that traffic and pedestrian safety issues at this intersection must be more comprehensively addressed. … Residents and members of the Whitman High School community are again calling for a traffic light at this intersection via a petition that already has over 2,000 signatories. We ask that you conduct a traffic safety study that examines all potential options — including a traffic light — that could make that intersection safer for all users. We ask that you conduct this study as quickly as possible.”

Detectives with the Montgomery County Police Collision Reconstruction Unit are encouraging anyone with information about the fatal collision to contact them at 240-773-6620.

At approximately 6:56 p.m., Feb. 27, 2nd District officers and Fire and Rescue personnel responded to the intersection, near Walt Whitman High School, for a report of a serious collision. Investigation determined that a blue, 2016 BMW M235, operated by Ogulcan Atakoglu was traveling west (outbound) on River Road. At the same time, a gray, 2016 Chevrolet Volt, operated by Michael Buarque De Macedo, was traveling east (inbound) on River Road. As the Volt was attempting to turn left onto Pyle Road the two vehicles collided.