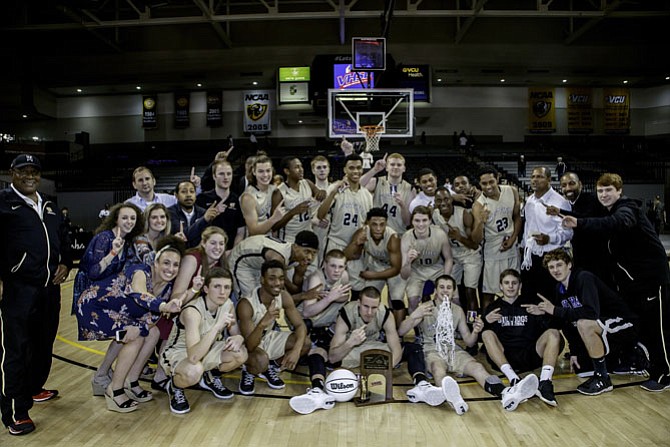 The Westfield boys’ basketball team won the 2016 6A state championship. Photo by Will Palenscar 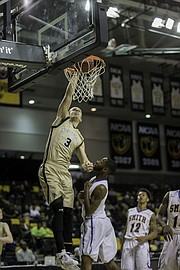 The Westfield/Oscar Smith matchup in the 6A boys' basketball state championship game was a historic one — it was the first time since 1921 two schools had met in the football and boys’ basketball state finals in the same academic year.

At the end of the night, Westfield made some history of its own.

The Westfield boys’ basketball team won the program’s first state title with a 74-56 victory over Oscar Smith on March 9 at VCU in Richmond. The Bulldogs led by 13 points at halftime and by 20 entering the fourth quarter.

Westfield became the first boys’ basketball team from Fairfax County to win a state title since Lee won it all in 1981.

T.C. Williams, which captured the 2008 state championship, is the only other boys’ basketball team from Northern Virginia to win a state title in the last 35 years.

“I’m really excited for our region,” Westfield head coach Doug Ewell said. “It’s been 35 years since [Fairfax County has] won a state title — since 1981. We’ve had some great coaches and I don’t think I’m anywhere close to them, but we do have a state title back in Northern Virginia [and] that’s important to me.”

“Tyler and Blake always put me in a great spot to succeed,” Johnson said. “They get so much attention — and rightfully so. They just give me good open looks and I know them down when I get the chance.” 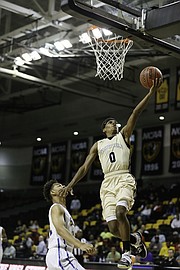 Scanlon and Johnson were members of the Westfield football team that defeated Oscar Smith 49-42 in triple overtime in the fall to win the state championship. Scanlon said the boys' basketball team's loss to Colonial Forge in the 2015 state final served as motivation for both sports. The Bulldogs missed four free throws in the final minute and lost by one point.

“Last year, after the Colonial Forge game ... I remember Coach Ewell saying, ‘Tyler will be back, he’ll be in the gym tomorrow’ and we took that mentality into football,” Scanlon said. “... We don’t win these championships without last year, because that motivation was unbelievable. Every time you wanted to walk away, it was, ‘Man you were this close to getting your ring sized.’

“When you have a motivation like that and you have some talent, that’s really what gets you there.”

While Westfield won comfortably against Oscar Smith in the state final, the Bulldogs’ win over Woodside in the semifinals the previous night was much more dramatic.

Scanlon scored with 2 seconds remaining in regulation and Westfield won 52-50.

"Truly, at the end of the day, we go to our horses, they go to their horses," Ewell said, "and our horse took the lead."

With the score tied and time winding down in the fourth quarter, Francis flipped the ball to Scanlon near the top of the arc and set a screen. Scanlon drove to his right before lofting a shot over three Woodside defenders from just outside the lane. 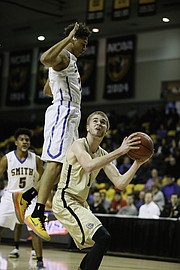 Westfield senior Hank Johnson made four 3-pointers and scored 18 points during the Bulldogs’ win over Oscar Smith in the state final on March 9.

Woodside came up empty on the game’s final shot.

“The whole game they were switching on ball screens and pretty much every screen, so I knew I was going to get a switch there, and I knew I had an open side ... and I figured I was just going to attack the basket,” Scanlon said. “I was planning to get a layup, but things didn’t work out.”

Westfield held the ball for more than a minute before Scanlon dropped in his game-winner.

“I think my teammates trust me and that’s a big deal,” Scanlon said. “When your team has faith in you to take that shot, it makes it a lot easier.”

Westfield trailed by four early in the fourth quarter. After a Scanlon bucket cut the Woodside lead to two, Francis knocked down a 3-pointer from the right wing and drew a foul. He converted the four-point play, giving the Bulldogs a 46-44 lead with 4:36 remaining.

“My shot really wasn’t falling at the beginning of the second half,” Francis said, “so I got my confidence boosted a little bit” after the four-point play.

Johnson finished with eight points and six rebounds. Joe Katchmark knocked down a 3-pointer for the Bulldogs.